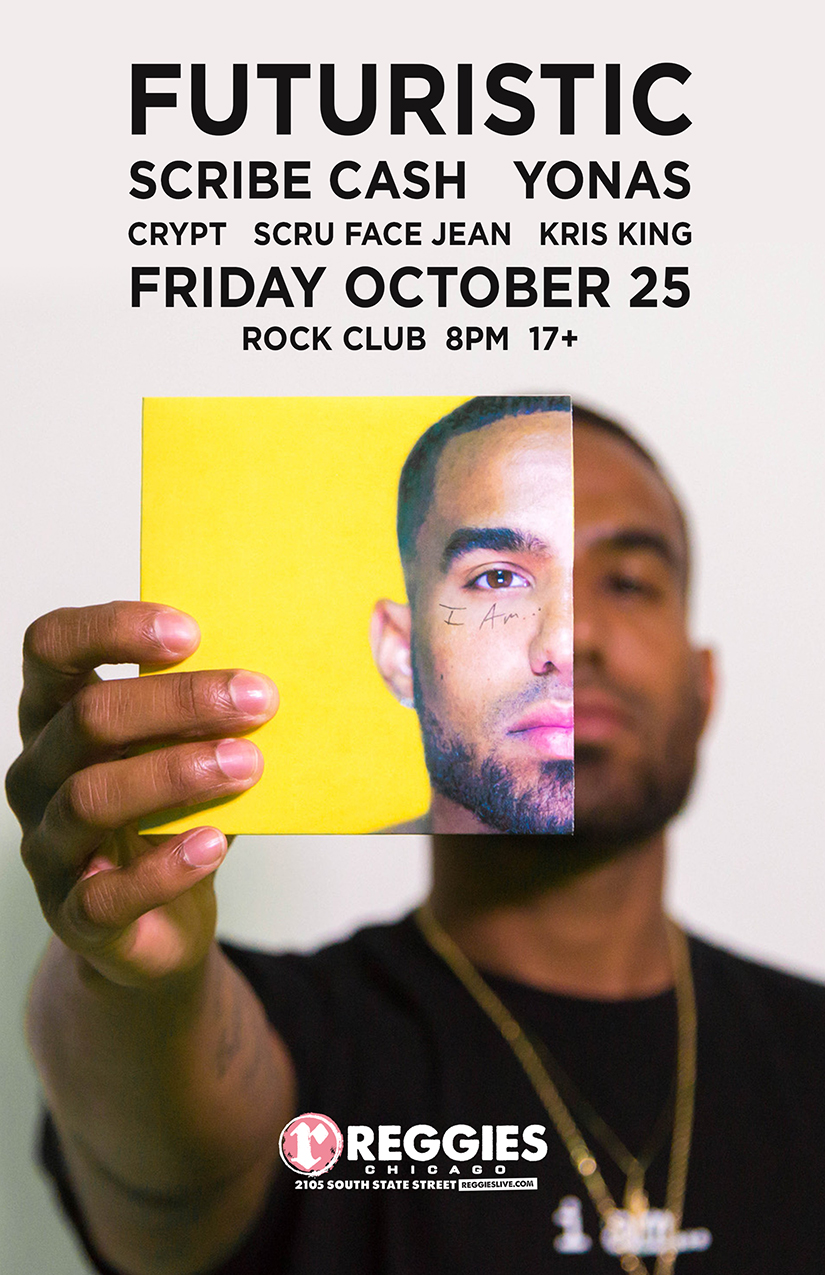 Futuristic is a Hip-Hop artist originally from Illinois but based out of Arizona who uses his humor, intelligence, and real life experiences to make music that’s like no one else’s. At the age of 21 he has already managed to gain a huge following across the united states and share the stage with some of the games biggest names. His trademark phrase “I had to do it” and his cocky but funny flow makes him distinguished while his depth and story telling makes him relatable to fans. His movement WTF (We’re The Future) is bringing people together and giving them a positive message to relay to others which led to the success of his first major project “Dream Big”.

Dream Big, released in February of 2012 included the 3 hit singles “Fuck you Mean” “I Got Sauce” and “La La La” who’s YouTube views combined for over 400,000 in the first 6 months selling singles and albums in all 50 states. The success of “Dream Big” led Futuristic on a 9 show mini tour through the West-coast and Midwest where his impeccable stage presence and extreme charisma excited fans and earned him new ones. His most recent project “Chasing Down A Dream” dropped 2/19/2013 and quickly moved to #28 on the iTunes Hip-Hop charts and #86 on billboard with the lead single “Don’t Mind If I Do” selling thousands of copies & accumulating over a Million views on YouTube. Futuristic then joined Dizzy Wright on “The Golden Age Tour” & embarked on his own solo run in over 30 cities through the west coast and midwest. His next project “Traveling Local” is set to drop early spring 2014…

ScribeCash, the multitalented, California-bread female emcee, singer, and director premiered her video “Never Breaking Up” feat. TreVante on BET’s 106 & Park. Soon after, she then aired the video for her single “Get on My Level” feat. Eric Bellinger. Igniting the fire that is her rough edge with refreshing beauty, she lays bars similar to the likes of her predecessors with a unique flare of west coast flavor.After opening up for Kid Ink, Eric Bellinger, Derek Luh, Sammy Wilk, Futuristic and many more, Scribe headlined her first national tour. Recently, Scribe released her project “99+1” and the lead single also titled “99+1” peaked at #34 on the iTunes charts. In June of 2017 Scribe started a video series “Road To One Million” where she’s been dropping a new song and music video every month in pursuit to hit one million views on one video. This young performer is just beginning her trip to the top. Keep waiting at the edge of your seat to see what she does next.

Hailing from New York City, Yonas is one of hip-hop’s most-hyped emerging artists. Known for his incredibly unique style, the 25 year old makes it known that he is unlike anyone else in the game.

Although Yonas is just breaking out, he has already built-up quite the list of accomplishments. In 2010, Yonas won a Billboard song writing award for his song “Banga”. Additionally, his hit single “Sky Kidz” was featured on MTVu as well as Fuse TV with no label or marketing assistance. Yonas had begun to resonate directly with his audience, as he released his debut album The Proven Theory in 2011 setting the foundation for something special.

In the summer of 2012, about a year after his debut album, Yonas released The Transition which is now known as his breakout Mixtape. Accumulating over 100,000 downloads in just a short period of time, his independent successes captured the attention of XXL who contacted Yonas to be featured in their Magazine’s “The Break” section. Shortly thereafter, Yonas was invited on a 50 city Tour, which took him across the country and back in 60 days, and due to his electric Live Show, his fan base more than doubled in that time period.

Since then Yonas has gone on to release 2 additional projects, one of which (The Black Canvas EP) reached Top 5 on the iTunes Hip Hop Charts, and Top 25 on the overall Albums Charts for the first 72 hours of its release.

Yonas and his ability to empower and uplift anyone that listens to his music has developed an Artist-to-Fan connection that is undeniable. Currently working on his Sophmore album, Yonas has put himself in a position to make an incredible impact on the music world.

Kris King, representing Arizona. #ImperialCollection You can find me on ALL social media outles, including soundcloud: @ KrisKingIC