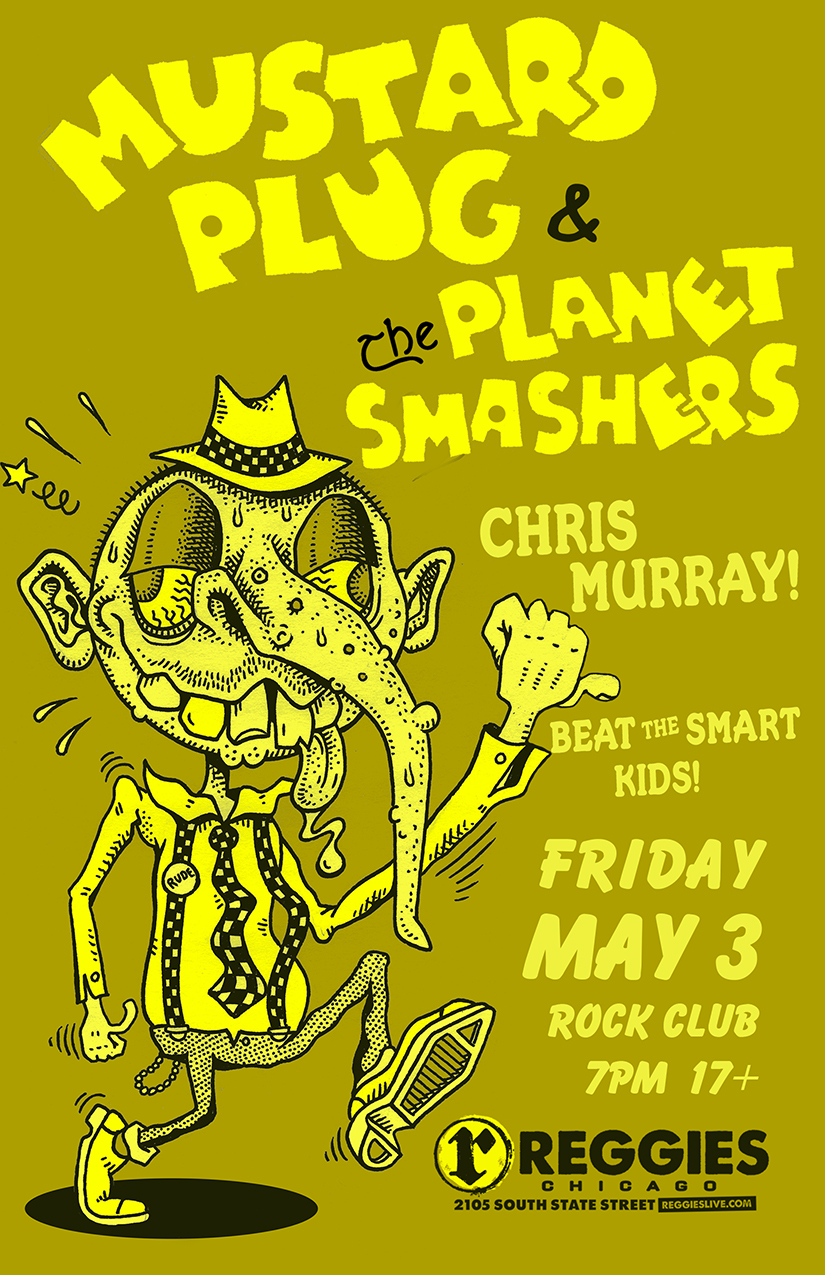 Mustard Plug started out in the punk clubs, basements and dive bars of the Midwest, playing punk-influenced ska music before most people in the U.S. had ever heard of ska. They clung to a DIY work ethic that had been ingrained in them growing up in the 1980′s hardcore punk scene and applied it to everything they would ever do together as a band. Mustard Plug released their first cassette tape themselves (1992′s Skapocalypse Now!), and played constantly to earn enough money to record their first album – 1994′s Big Daddy Mulititude. Their debut full length was released on legendary NYC label Moon Records (home of Toasters, Hepcat, Dance Hall Crashers, and pretty much every other 90′s ska band of note). With their new found national distribution and exposure, the band climbed into their van and performed their music to new fans across North America. Twenty-one years, 1500 shows and 200,000 album sales later, it cannot be denied that the band has surpassed all expectations and permanently staked their claim in contemporary music.

For their new album, “Can’t Contain It”, Mustard Plug have returned to the DIY blueprint that the band was built upon, while at the same time embracing all the school of hard knocks craftsmanship and wisdom that the band has earned along the way. The band spent the last several years writing new material that was informed by 22 years of songwriting experience while retaining the youthful energy that has endeared them to their fans. They tracked the record at bassist Rick Johnson’s Cold War Studios, giving them the flexibility to experiment and add new layers and dimensions that were not possible given the time constraints on their previous recordings. Many of their musician friends(Dan Potthast, Sean Bonnett, Mark Petz, Corey Ruffin) were tapped to contribute, creating a denser, more intricate sound.

Once the recording process for Can’t Contain It was complete, the band turned to their fans to help finance the mixing and production of their record. Their Kickstarter campaign surpassed all their expectations, doubling their initial goal and re-confirming the support and love of their audience. The tracks were then sent to be mixed at Bill Stevenson’s Blasting Room Studios where Mustard Plug had recorded 3 of their previous albums (including 1997’s breakthrough “Evildoers Beware” and 2007’s “In Black and White”). The result is possibly their most diverse and best record to date.

After tapping their friends and fans to help out with the recording, the band turned to more of their posse to collaborate on the artwork. Underground icon Jeff Rosenstock designed the album packaging, while noted artists Craig Horkey and Larry Kole created alternative limited edition album covers and posters. The final piece came together when at the last minute, No Idea record founder, Var Thelin heard the record and offered to partner with the band on its release. Mustard Plug is excited to be given the opportunity to collaborate with a label known for its’ strong punk rock ethics and underground credibility.

Ultimately, this release is about the community Mustard Plug has built during its’ 22 year existence. Coming full circle back to the DIY scene and the community that the were born out of has helped them to put out their best record to date.

FLASHBACK!: The year was 1994 and the world was a very different place….A happy-go-lucky Bill Clinton presided over the free world; Ace of Base topped the music charts with their insipid reggae-inspired hit The Sign; cats had yet to take over the internet, men and women wore acidwashed overalls slung from one shoulder à la Joey from Friends; and a young band of ragtag miscreants released their first full-length to an unsuspecting public. In case you haven’t been paying attention, that band was (and still is) The Planet Smashers.

Fast forward two decades, seven albums, one million records sold worldwide, six gazillion beers consumed, countless tours and one extremely blurry never-ending party to this futuristic and confusing present day. Who will save us from this current clusterfuck filled with beliebers, honey-booboos and bathroom selfies? Who will stand boldly in the face of the autotuned, deep-vee wearing douche chills crapping in the earholes of the world? Who will dare to play their own instruments while blasting out ska hooks so catchy you wish you could scoop them up and eat them like ice-cream?….You’re goddamned right it’s The Planet Smashers.

Chris Murray is a unique force on today’s music scene. He earned a strong reputation as a dynamic performer and gifted songwriter armed only with an acoustic guitar. Life has led Chris down a musical path to the very roots of reggae music. From trading songs on acoustic guitar and singing, to jamming and recording, Chris has served his apprenticeship with the finest musicians associated with the genre. He has collaborated with countless talented musicians from around the globe, and his journeys have taken him throughout the world being inspired and inspiring people’s lives.

Beat The Smart Kids is the product of local Chicago ska punk veterans banding together to deliver music to your ears. Fresh and hot.

With former and current members of Waste Basket, The Indecisives, Still Alive, and The Damn Tracks you can be sure to find catchy horn riffs, gravely vocals, and a driving punk sensibility.