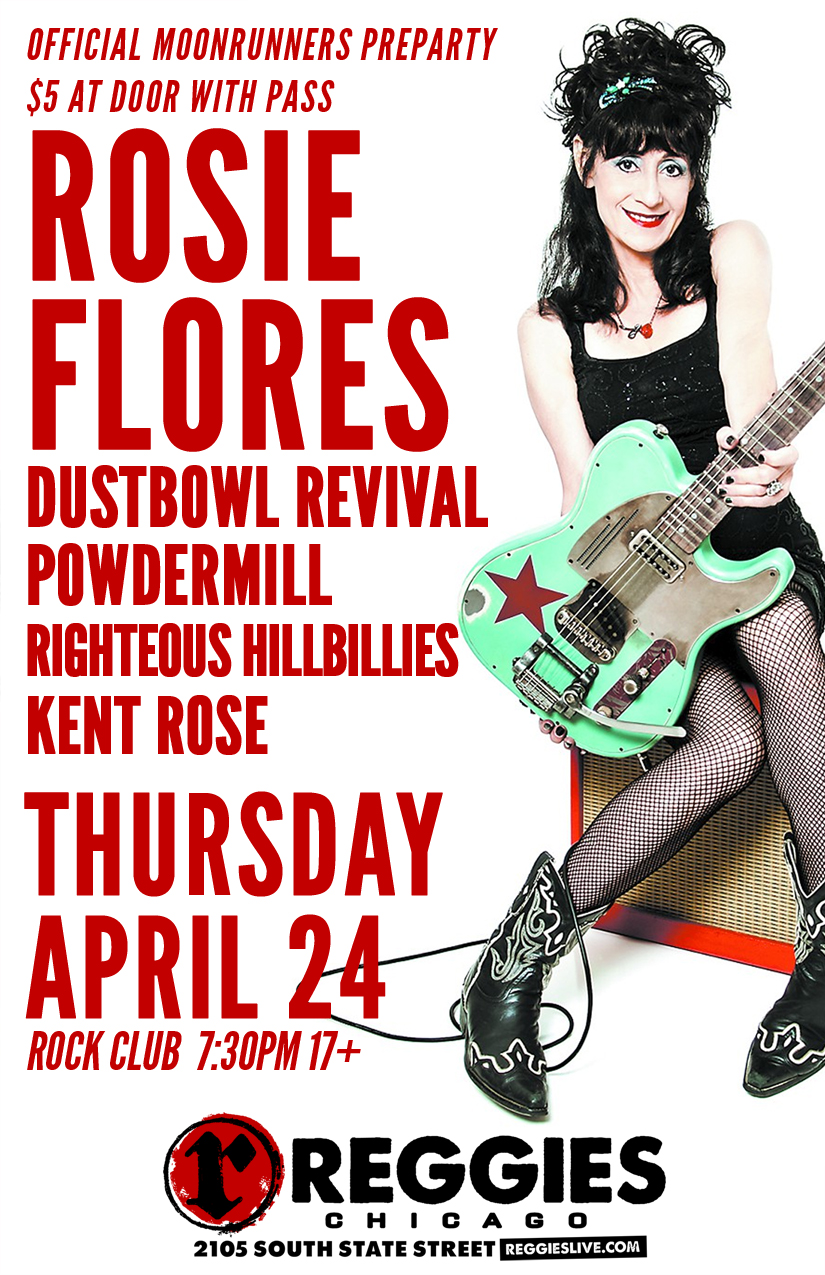 Alternative country meets the rockabilly revival meets California guitar virtuosity in the music of Rosie Flores. Since the late ’70s, guitarist, singer, and songwriter Rosie Flores has been an important figure on the alternative country scene in both Austin, TX, and Los Angeles. She’s a hard-working, independently minded artist who’s well-respected for her gritty, energetic vocals and fiery guitar solos.

A native of San Antonio, Flores moved to San Diego with her family when she was 12. Her family encouraged her singing and guitar playing, and as a girl she soaked up the sounds of southern California — surf guitar, country and country-rock, blues, and rockabilly-flavored garage rock. By the time she was in her teens, Flores was playing in a band called Penelope’s Children. During the first explosion of punk rock in the late ’70s Flores formed Rosie & the Screamers, an otherwise all-male band that played hard country and rockabilly material, much of it written by Flores herself. She worked as a solo acoustic artist for a time but then formed an all-female punk band, the Screaming Sirens, who recorded the album Fiesta in 1984.

Rosie Flores In 1987 Flores recorded her first solo album, Rosie Flores, produced by Pete Anderson (Dwight Yoakam’s producer and guitarist) and released by Warner Bros.. The album gained critical acclaim, and among music-industry folk a Flores concert remains a strong draw to this day. But it was only modestly successful commercially, and Flores was dropped by Warner Bros.. She signed with the California independent label Hightone and in 1992 she released her second solo album, After the Farm, followed by Once More with Feeling a year later. These albums featured original songs by Flores, her own sharp guitar leads, and crackerjack session work from a variety of Los Angeles veterans. Flores then spent the better part of 1994 playing lead guitar in Butch Hancock’s band.

Rockabilly Filly In 1995 Flores recorded Rockabilly Filly, a spirited tribute to the music she grew up with. The album featured duets with her longtime idols Wanda Jackson and Janis Martin, both of whom Flores brought out of retirement for the project. The album led to a cross-country tour with Jackson, who hadn’t played in nightclubs in over 20 years. In 1997, Rounder re-released her Warner Bros. debut along with six new bonus tracks under the title Honky Tonk Reprise, helping to sustain the momentum of her career. That same year, the Austin label Watermelon released her duet project with Ray Campi, entitled A Little Bit of Heartache. In the late ’90s, Flores moved to the folk-oriented Massachusetts label Rounder, pushing the stylistic mix of her music slightly in the direction of rockabilly but not really changing course. The 1999 live album Dance Hall Dreams was recorded at a San Antonio country club and featured several of the top session players Flores has always been able to attract, among them Texas steel guitar stalwart Cyndi Cashdollar. Flores released Speed of Sound on the Eminent label two years later, offering yet more original songs as well as a scorching cover of Buck Owens’ rockabilly classic “Hot Dog.” Flores offered her fans an intimate perspective on her music with the solo acoustic live set Single Rose in 2004, and an album of country- and rockabilly-styled holiday favorites, Christmasville, followed in 2005. After a short hiatus, in 2009, Flores celebrated over two decades of recording with Girl of the Century, an album recorded with the Mekons’ John Langford and the Pine Valley Cosmonauts for Bloodshot Records. Her raucous 11th album, Working Girl’s Guitar, which appeared in 2012, was the first in which she handled all the production and guitar leads herself. Prolifically creative, Flores deserves to be numbered among the creators of the alternative country movement. Her career, never really flagging, has outlasted those of a host of other acts in that fast-moving genre.

Growing steadily from a small string band playing up and down the west coast (hundreds shows in the last two years), DBR has blossomed into a traveling collective featuring instrumentation that often includes fiddle, mandolin, trombone, clarinet, trumpet, banjo, accordion, tuba, pedal steel, drums, guitars, a bass made from a canoe oar, harmonica and plenty of washboard and kazoo for good luck.

With an enthusiastic and growing national following, DBR released their first LP, You Can’t Go Back To The Garden of Eden to rave reviews. Their tune “Dan’s Jam”, received Americana Song Of The Year honors by the Independent Music Awards (Tom Waits, Ozzy Osbourne judging). The group has placed songs in several independent films and TV projects including “Made In China” (IFC) which won SXSW, and in a 2013 episode of FOX’s AMERICAN IDOL. National radio play includes LA’s KCRW, KPFK, and KCSN, Austin’s KGSR, SF’s KPFA and Seattle’s taste-making KEXP.

Their EP + vinyl 7’’ Holy Ghost Station was released in the summer of 2011 under the auspices of analog specialist Raymond Richards with Rockets Red Glare (Local Natives) and in 2011-12 Dustbowl played with artists as diverse as The Rebirth Brass Band, Best Coast, Steve Martin and The Steep Canyon Rangers and more, hosting shows from Chicago to Seattle, Anchorage and San Diego as well as playing festivals like Outside Lands, Lightning In a Bottle, Make Music Pasadena and The New LA Folk Festival.

2013 has a new album – Carry Me Home, on the way. Merging their vintage style with a hip, lose-your-troubles-and-start-moving vibe, the record perfectly encompasses the band’s upbeat message. Seeking to travel more widely in 2013, the band will be playing Mountain Song Bluegrass Cruise to The Bahamas (Punch Brothers, David Grisman) as well as venturing to Arizona, Colorado, New York and beyond.

Verisimilitude isn’t a word you’re likely to hear out of Powder Mill but it’s the one that fits. Everything about these Missouri men feels damn real: salt of the earth substance apparent in every tune, every rugged but right vocal, with every line ringing true and strong backed with the kinda muscle that lays a body flat. A palpable sense of place permeates their music, deftly carved mountains and rivers winding through their tunes, the backwoods stills and boogie shacks breathing along bad roads everyone knows you just shouldn’t wander down but do anyway because, well, human nature – something this band understands very well, clearly fellas who’ve spent a few nights in jail AND learned a thing or two from it.

But these are no wannabe outlaws, just guys telling it like it is, unvarnished reports from the blue collar trenches, putting melody to every solitary late night thinker wondering, “I’m working this damn hard and this is all I’ve got?” There’s a healthy measure of early Asbury Park Springsteen to the gritty pondering of the band’s 5th album, The Land of the Free, which strives to drag Jesus from the dark side of town, eager to bring the good word to every battered, struggling soul living on the ragged, shadowy edge.

Make no mistake, this is rock ‘n’ roll that needs no adjectives (modern, classic, Americana, etc), but this is also unabashedly country as fuck, embracing the world outside big cities and tied to the land and its cyclical flow in tangible, lived ways. In this way and many others, Powder Mill are the true sons of Ronnie Van Zant, with a game that’s tight, tough and fired up about all the right things – family, freedom and fun – and a surprising tenderness that slips in between all the fisticuffs, hot messes and weed running in their tales. Their willingness to tussle extends to love, understanding that the real thing has to be fought for and defended with all one’s might, perhaps most so against one’s own failings and dumb decisions.

Powder Mill, particularly on The Land of the Free, put the lie to notion that they don’t make ‘em like they used to. This is a band that can proudly stand shoulder-to-shoulder with pre-plane crash Skynyrd, Ozark Mountain Daredevils, The Black Crowes and contemporaries like The Drive-By Truckers and Slobberbone as torchbearers for rock rooted in unremittingly honest soil that takes full advantage of Southern musical traditions – People’s Music made by real people with more heart, balls, raw charm and natural talent than most God made. -Dennis Cook

Brent James (vocals & rythyhm guitar), Kev Wright (vocals & lead guitar), Johnny Gadeikis (bass guitar) and Barret Harvey (drums and percussion), are four talented, unique, and powerful individuals coalesce to create The Righteous Hillbillies. The Righteous Hillbillies are an axe shredding, ace dealing, foot stompin’, Southern rock, high-powered Ameicana, boogie blues band that plays with talent and passion. They have built a strong, supportive, and loyal following throughout their hometown of Joliet, Illinois and into the Chicago area. The Righteous Hillbillies baptize their work in the blood of Lynyrd Skynyrd, AC/DC, ZZ Top, and the Black Crowes while still managing to create an original and independent style. With their dynamic and fiery new album, Trece Diablos, The Righteous Hillbillies are prepared to raise the stakes from entertainment to that old time rock ‘n’ roll religion. If it doesn’t get you dancing, moving, and singing, you might as well sign your “do not resuscitate” order at the nearest opportunity.

“He’s a throwback to the guitar-toting country troubadours of yesteryear and at the same time a product of the rock and roll era, certainly the only performer of his kind in the greater Chicagoland area.”

— Bill Dahl, author of The Art of the Blues.