TOASTAMANIA X Please note that the Rock Club show is 17+ and the Music Joint show is 21+. Nobody under the age of 21 will be permitted in the Music Joint.

$20 Cover allows entry to both rooms of music. Note the age restriction in The Music Joint. 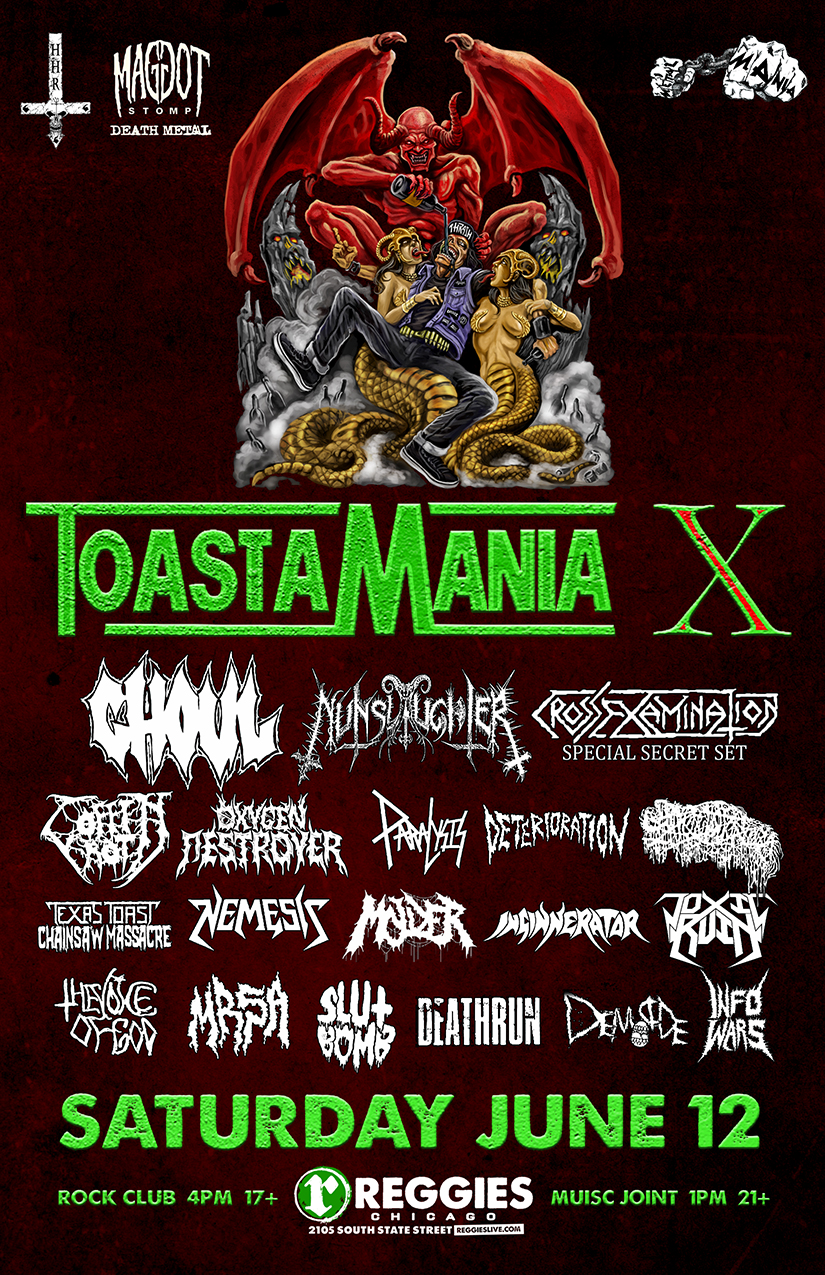 Not much is known about Ghoul as they are always seen wearing masks. The members go by the stage names Cremator, Fermentor, Digestor, and Dissector. The band has a large line-up of characters in their lyrics, including the four of themselves. Most of the information about them comes from the “Curio Shop Owner” one of the many characters mentioned in their songs. They claim to be mutants that came from Creepsylvania. Ghoul was signed after self-releasing a demo. Their musical style is best described as a blend of thrash and death metal with death metal vocals and lyrics.

Deformed in 1987 by Don of the Dead (bass) with Jer the Butcher (guitar), Gregoroth (vocals) and Behemoth Bill (drums), the spawn called NunSlaughter began spewing forth the sonic vomit known as Death Metal. Taking from the learning experience of their earlier bands Death Sentence and Bird of Prey they shunned the vile confines of a studio for the oppressive darkness of a basement tomb to release their first demo in 1987 christened “Ritual of Darkness”. The raw sound of “Ritual…” established N.S. as purveyors of true Death Metal.

The band’s line up experienced its first of many mutations in 1989, with Jer and Bill being replaced by Rick Rancid (guitar) and John Sicko (drums). NunSlaughter’s second bastard offspring came screaming through the birth canal shortly thereafter, dragging its fetid placenta, “The Rotting Christ”. The next band-member morphogenesis occurred in 1991 when Gregoroth and Sicko slithered away. Von the Impaler latched on as a drummer and Don of the Dead (still on bass) became NunSlaughter’s vocalist as well. This repugnant assemblage produced the band’s third demo, “Impale the Soul of Christ on the Inverted Cross of Death”.

Two years crawled by before the next NunSlaughter creation was revealed. In 1993, upon learning that the now legendary “Ritual of Darkness” demo was being bootlegged as a 7″ record in Brazil, Don of the Dead began conspiring to celebrate NunSlaughter’s international conquest. The band conjured up yet another drummer, Mark Perversion. Hell bent on keeping the intrinsic, unrefined sound that had become their trademark, N.S. recorded their infamous “The Guts of Christ” demo completely live in their living room.

In 1995, NunSlaughter reinstated the unholy alliance of three of the original members: Don of the Dead, Gregoroth and Jer the Butcher. This sinister triad summoned the relentless drumming powers of Jim Sadist and exorcised the “Face of Evil” demo for the underground Death Metal masses. In January of ’97 (after Gregoroth and the Butcher went their separate ways) Don and Jim, along with fresh meat Chris 213 (bass) and Blood (guitar), began a new decade of death with the bands first studio recording, a split 7″ record with Bloodsick.

After countless setbacks but continuous writing NunSlaughter unleashed four more 7″ records with the first being a limited edition glow in the dark split 7″ record with Dekapitator. Soon after, a meeting of the most sinister kind came about with Crucifer to release a split 7″ of 666 copies. Unable to restrain their twisted prolific minds, NunSlaughter then produced an entire 7″ record entitled “Blood Devil” and the legend continued to grow from their split 7″ with cult female Death Metal band Derketa.

With the signing to Revenge Productions NunSlaughter released their full length LP/CD “Hells Unholy Fire”. A tour was arranged to promote the LP and NunSlaughter began their European tour in September 2000. While touring NS released another 7″ record entitled “Trifurcate”. This was another vile release that is heralded by the underground as one of the best 7″s.

Continuing with the tradition of vinyl and metal NunSlaughter prominently display their prowess in song writing ability and creativity in releasing many 7″s with specialty packaging. The time was ripe and the desire was there so NunSlaughter decided to release another full length studio LP in 2003. Entitled “Goat” this insidious recording was released by Revenge Productions in Europe and Metal War Productions in the USA. Another tour was booked and NunSlaughter prepared to invade Australia with their Metal Assault tour. Booking six dates in Australia with some of the best underground Aussie bands NunSlaughter held their own and proved their metal music fist could reach around the world. Upon their return NunSlaughter spent the next 2 years writing and recording over 16 new 7″ records and split 7″s. Working almost exclusively with Hells Headbangers the band has been able to produce some of the underground’s most sought after vinyl releases.

The planets aligned correctly in 2005 and another tour was prepared and booked this time in Japan. The “Goat” LP/CD had been sold out for a long time so plans were made to re-press it with a new layout and bonus track, as a digipak CD/LP and Picture LP, all on Hells Headbangers. The tour of Japan was immensely successful and NunSlaughter returned as conquerors of the land of the rising sun. With newly found vigor the band is planning their second DVD, this time with the footage and audio of Japan.

2006 has seen the release of a multitude of records including a split 7″ with Nocturnal, “Fathers of Fright 7”, “Fuck the God in Heaven” shaped CD / shaped Picture LP, “Face of Evil” 7″, “Rotting Christ” 3″ CD, “Goat” deluxe jewel case CD and the “DemoSlaughter” 7″ box set. Currently plans are being hatched to take the band back to California for a few shows as well as Florida, New York, Ohio and Illinois. This year NunSlaughter will also team up with several notable acts like Deceased, Destructor, Mutilated Messiah and Brody’s Militia for some split records. A rehearsal LP is also planned for the Japanese label Heavy Metal Super Stars and a new studio album entitled “Hex” on Hells Headbangers in June of 2007.

What has NunSlaughter been up to for the last 7+ years? Making metal and touring the world! Successful tours of Scandinavia, Europe and South East Asia in the past few years as well as a slew of killer split 7″s and wicked live shows prove that NunSlaughter is not going away anytime soon.

The new full length album, “Angelic Dread,” will be out through Hells Headbangers Records in July 2014. This is quite possibly the bands most cohesive piece of metal to date. To promote the album NunSlaughter is touring Europe as well as a few shows in the United States. The new line is the prepared to bring the HELL to it’s minions.

NunSlaughter is 27 years old and still metal as fuck. Over 130 releases on various formats and a multitude of bootlegs from around the world and you still never heard of them? Get off your ass and go down into the underground where NunSlaughter dwells.

Professionalism is stupid; bios are even worse.

Texas Toast Chainsaw Massacre is a crossover thrash band made up of 5 nerdy dudes who love making music, and combining fast riffs with comedy and pop culture references.

Wisconsin’s front line in all things THRASH and Heavy Metal.