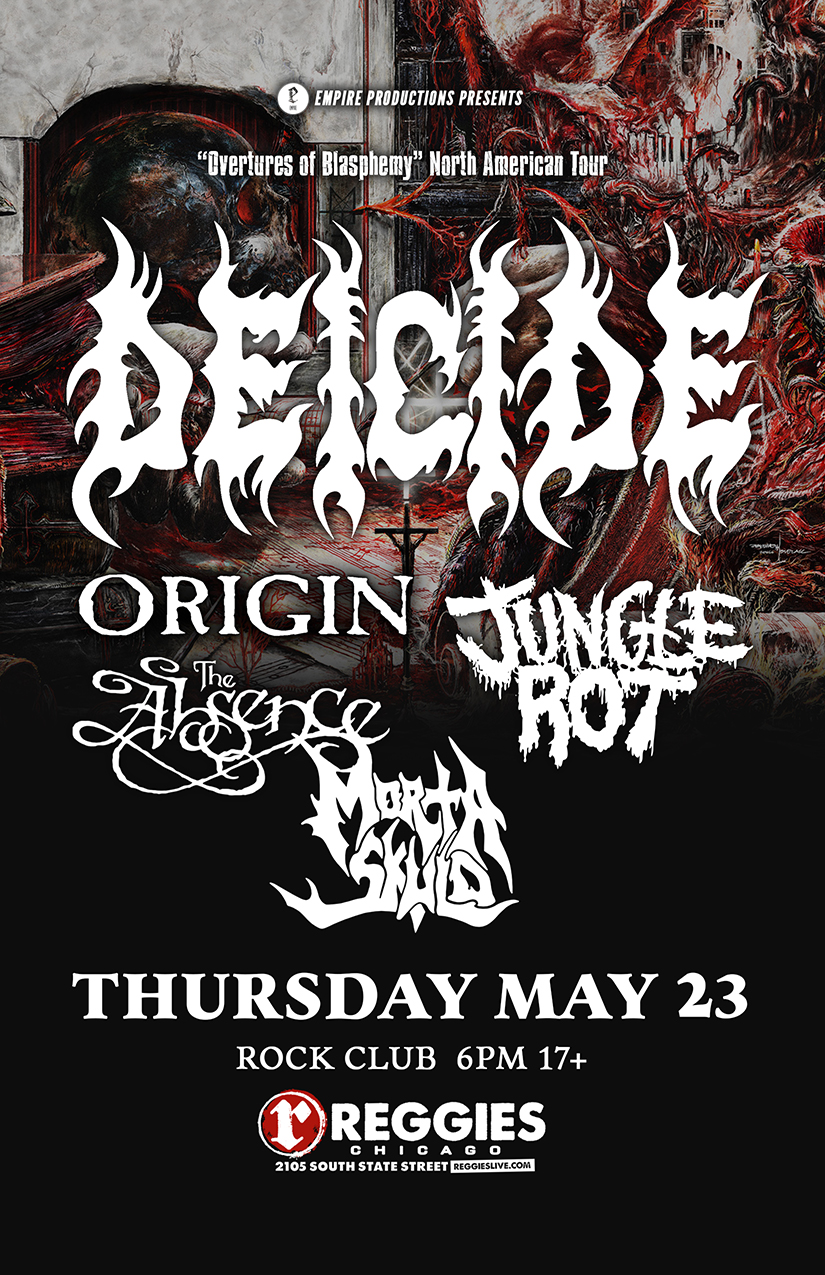 Twenty years ago, an underground cult movement surfaced in Tampa, Florida that revolutionized the metal world. The pioneers of this burgeoning scene, DEICIDE, are still striking fear into hearts of the masses to this day. Century Media Records are extremely proud to announce a worldwide deal with DEICIDE, one of the founding fathers of death metal and easily one of the most influential and controversial bands ever. With a relentlessly brutal sound and uncompromisingly blasphemous lyrics, DEICIDE helped set the standards for extreme metal and have maintained those standards ever since.

DEICIDE led by original members Glen Benton (vocals, bass) and Steve Asheim (drums) have been busy at Audiohammer Studios with Mark Lewis (Black Dahlia, Chimaira) and are looking at a summer ’09 release. The group have reunited with legendary guitarists Jack Owen (ex-Cannibal Corpse) and Ralph Santolla (Obituary, ex-Iced Earth, Death) and will embark on a two-week European tour in January 2009.

Benton states: “I want to say it is an honor to be an official CM artist. I look forward to working with the fine folks at CM and providing them with our style of metal. I can ensure you that what surfaces will definitely be nothing less than a total bash-your-face-in-from-start-to-finish, bastard. HAIL SATAN!!!!”

Asheim further comments: “I’m happy to be a part of the CM family and look forward to working with them. The new DEICIDE material in the works should be a good way to kick off the new deal. It’s a totally sick new record with a totally sick new label, but the same ol’ sick DEICIDE. See you all in 2009 and hold onto your balls!”

DEICIDE released their groundbreaking self-titled debut in 1990. Recorded at Tampa’s Morrisound Studio (the legendary studio where the band would go on to record all its albums), the vicious debut would soon be hailed as one of the “Top 100 Metal Albums of the 90’s” by England’s metal authority, Terrorizer Magazine. In 1992, DEICIDE followed up their debut with “Legion”, which was an instant success, further establishing their furious musical intensity and vengeful anti-Christian stance. This landmark extreme metal release secured their place at the forefront of the American death metal scene as they rapidly earned a reputation for controversy.

DEICIDE’s appearance and live antics matched the extremity of their music and lyrics. With an inverted cross branded into his forehead, Benton cast himself as the incarnation of pure evil. At shows, he was known to pull such stunts as dousing the crowds with bags full of real animal organs. DEICIDE quickly found themselves banned from clubs, boycotted by magazines, and blacklisted by Christian groups and animal-rights activists. Anti-establishment to the core, DEICIDE embodied the worst fears of the conservative masses, and loved it. Rather than shy away from controversy, DEICIDE provoked it and willingly engaged in it.

DEICIDE stormed ahead into the future, releasing numerous albums engulfed by waves of controversy, as their popularity continued to ferment within the scene. However, it was the 2006 release “The Stench of Redemption” that put the band back on the map as the leaders of the genre. This was their first album to showcase the more melodic leads of guitarists Owen and Santolla which only added to their riotous and enigmatic success. DEICIDE looks forward to taking things to the next level in 2009, promising to deliver the album of their already heralded career.

Merciless, enormous and all-encompassing, Origin deliver a sonic barrage of inhuman proportions. Faster, darker and more complex than anything the death genre has issued to date, Origin’s otherworldly musicianship while delivering heinous amounts of the band’s unique “aggro-tech” extremity. Akin to awakening into a previously unknown state of consciousness, Informis Infinitas Inhumanitas is an audio head trip where the rules of time and space no longer exist.

Jungle Rot unravel unregulated aggression in a purely candid style. As if set to an egg-timer, it never takes more than a heartbeat for this four-piece from Chicago to go straight to the fuckin’ point. Their songs are known for hostility and tightly infectious riffs. They have an impressive ability to deny sounding “reused” or “recycled”. Throaty, but understandable vocals have long been a trademark of Dave Matrise all throughout the nine years JR has been shoveling forth their particular brand of underground demolition. About the best thing going for Jungle Rot is their versatility. Referring mostly to musical style, their capacity to be a welcome addition to any bill is almost without question. Be it Sodom, In Flames, or the Beastie Boys, Jungle Rot is destination unto themselves.

Florida’s THE ABSENCE came onto the scene in 2005 with their crushing, Erik Rutan-produced Metal Blade Records debut, “From Your Grave.” The album and its two follow-ups, 2007’s “Riders of the Plague” and 2010’s “Enemy Unbound,” showcased the perfect mixture of heart-wrenching melodies and skull-pounding aggression, truly making them one of the premiere bands of the melodic death metal scene. THE ABSENCE further ensconced their reputation via several tours supporting some of the biggest names in metal, including Cannibal Corpse, The Black Dahlia Murder, Amon Amarth, Goatwhore, Kataklysm, Destruction and Entombed.

And then they seemingly disappeared.

Despite some setbacks in personnel coupled with a desire by some band members to explore new terrain recording/performing with additional groups or working in related fields producing or handling live sound/tour managing for others, THE ABSENCE was merely put on hold until the time was right to return. Last year, the regrouped outfit of singer Jamie Stewart, drummer Jeramie Kling (Venom, Inc., Infernaeon, Necromancing The Stone) and bassist Mike Leon (Soulfly, Cavalera Conspiracy, ex-Havok, ex-Arsis), along with the addition of celebrated guitar duo Joey Concepcion (Sanctuary, Jasta, Armageddon) and Taylor Nordberg (Soilwork, Ribspreader), teased fans with the face-melting “Septic Testament.” The reaction was phenomenal and motivated the band to continue writing and recording their epic return, and be absent from the scene no more.

THE ABSENCE’s new album, “A Gift For The Obsessed,” further proves why All Music Guide called the group “the greatest Swedish melodic death metal band ever to emerge from Florida.” Mixed at Sweden’s Panic Room (Watain, Scar Symmetry) and mastered at the country’s Ghost Ward Studios (Katatonia, Opeth), and featuring a striking layout by HKB Design (Sepultura), the album deftly mixes melodic death and thrash with incendiary guitar playing, pyrotechnic drumming and a sense of renewed hunger. Over its 10 blistering tracks – including a cover of Suicidal Tendencies’ “You Can’t Bring Me Down” featuring guest vocals by Soilwork / The Night Flight Orchestra front man Bjorn “Speed” Strid – the group not only shows no signs of rust whatsoever, but also sounds more potent than ever.

Formed in Milwaukee, Wisconsin in 1990, Morta Skuld has been in the American Death Metal scene for 25 years, and has played with such bands as Death, Obituary, Slayer, and Napalm Death. Morta Skuld went on to sign with England’s Peaceville Records. After breaking up for number of years, the band reformed with a new breed and take on their genre.