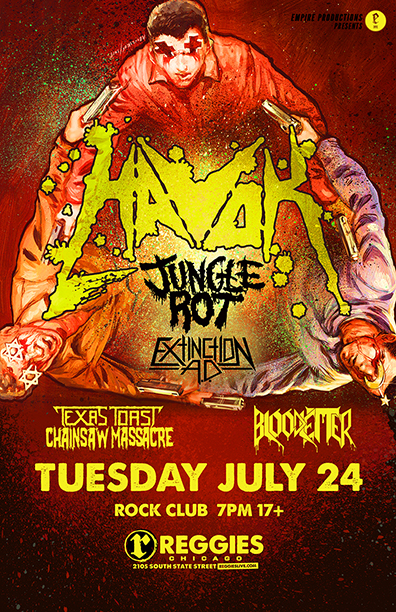 Although there are many other thrash bands out there, there is one thing that sets HAVOK apart from the others. This band puts their own stamp on the genre by employing a more technical side of music, while maintaining the feel. HAVOK’s live show is where the band really catches peoples’ attention, with their non-stop energy level and their ability to get the audience involved. They are a must-see for any fan of live music! HAVOK has received tons of positive feedback for their efforts to make thrash a mainstay in modern music: and they will continue to spread the intensity until they decide the job is done! Given their talent, determination, and constantly growing fan base, HAVOK is destined to become a mainstay in this scene!

Jungle Rot unravel unregulated aggression in a purely candid style. As if set to an egg-timer, it never takes more than a heartbeat for this four-piece from Chicago to go straight to the fuckin’ point. Their songs are known for hostility and tightly infectious riffs. They have an impressive ability to deny sounding “reused” or “recycled”. Throaty, but understandable vocals have long been a trademark of Dave Matrise all throughout the nine years JR has been shoveling forth their particular brand of underground demolition. About the best thing going for Jungle Rot is their versatility. Referring mostly to musical style, their capacity to be a welcome addition to any bill is almost without question. Be it Sodom, In Flames, or the Beastie Boys, Jungle Rot is destination unto themselves.

The band formed in 2013 and has been releasing music and touring steadily since, as seen with Unearth, Municipal Waste, Havok, Testament, Exodus, Shadows Fall, From Autumn To Ashes, Toxic Holocaust, Kvelertak, Nuclear Assault, Venom, D.R.I., The Red Chord, Bane, Act Of Defiance, Cro-Mags, Voivod, Vision of Disorder and many more.

Their full length debut Faithkiller was recorded and mixed by Brett Romnes (I Am the Avalanche, Anthony Raneri), and mastered by Brad Boatright (Nails, Noisem).

Texas Toast Chainsaw Massacre is a crossover thrash band made up of 5 nerdy dudes who love making music, and combining fast riffs with comedy and pop culture references.

What was once an outlet for humorous expression, now has become a vehicle to condemn listeners to a damn good time. Bloodletter conjures images of hellish punishment for those who have sinned and salvation for those who bend their knee to the dark lord. The expression “like a bat out of hell” has never been more appropriate. Combining pulsing drums, thundering bass, face shredding guitars and ghastly vocals, Chicago’s own, Bloodletter is unleashing a sonic assault of hellish music for all to hear.

Combining elements of speedy thrash, death, black, power metal and hardcore punk, along with a stage show that will make those faint of heart shiver and shake, Bloodletter is on a campaign to not only become super villains of the Chicago metal scene, but to teach lowly sinners a lesson through spreading their bombastic brand of metal upon all who listen.