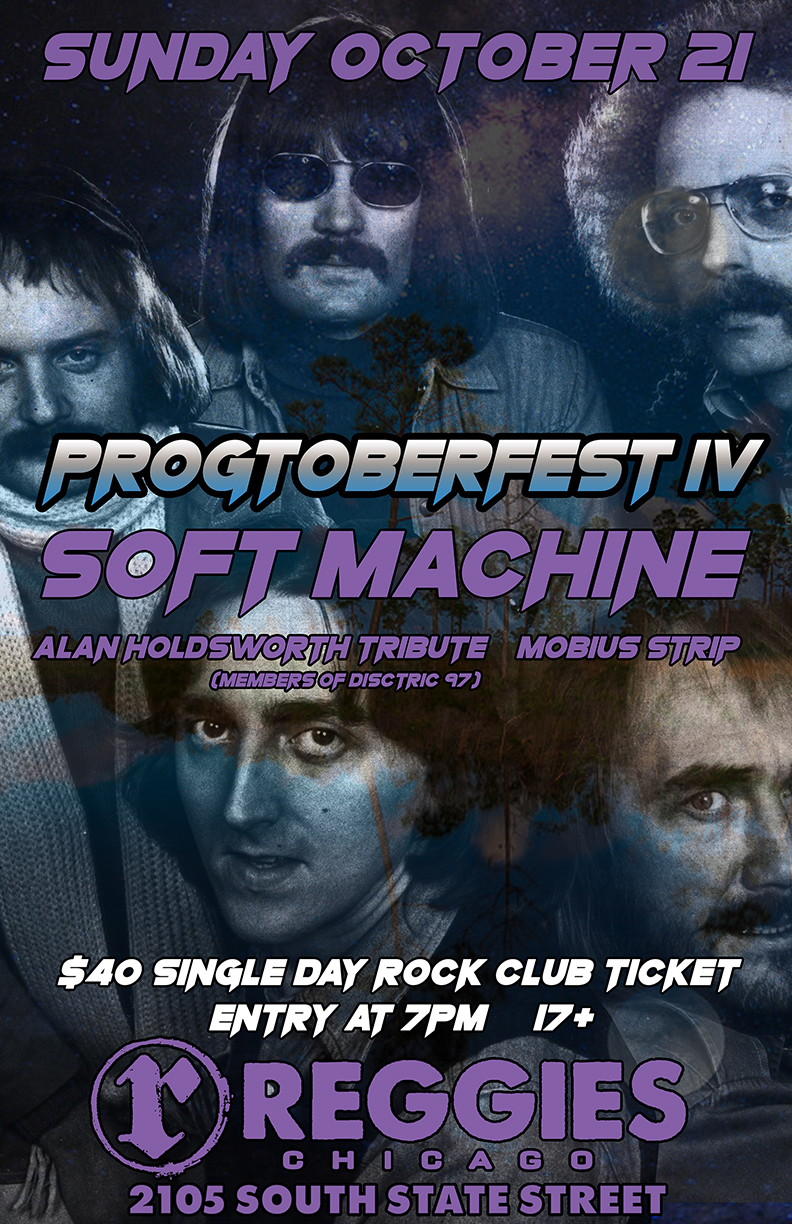 Soft Machine were an English rock band from Canterbury, named after the book The Soft Machine by William S. Burroughs. They were one of the central bands in the Canterbury scene, and helped pioneer the progressive rock genre. Soft Machine (billed as The Soft Machine up to 1969) were formed in mid-1966 by Robert Wyatt (drums, vocals), Kevin Ayers (bass, guitar, vocals), Daevid Allen (guitar) and Mike Ratledge (organ) plus, for the first few gigs only, American guitarist Larry Nowlin. Allen, Wyatt and future bassist Hugh Hopper had first played together in the Daevid Allen Trio in 1963, occasionally accompanied by Ratledge. Wyatt, Ayers and Hopper had been founding members of the Wilde Flowers, later incarnations of which would include future members of another Canterbury band, Caravan.

From late 2004 onwards, with John Etheridge replacing Holdsworth, they toured and recorded as Soft Machine Legacy. They released three albums: Live in Zaandam (2005), the studio album Soft Machine Legacy (2006) and Live at the New Morning (2006). Although Elton Dean died in February 2006, the band has continued with British saxophonist and flautist Theo Travis (formerly of Gong and The Tangent).

In December 2006, the new line-up recorded the album Steam in Jon Hiseman’s studio, released by Moonjune Records in August 2007 before a European tour in autumn. In 2008 Hopper was sidelined by leukemia and the band continued live performances with Fred Baker. Following Hopper’s death in 2009, the band announced that it would continue with Babbington once again stepping into the role formerly held by Hopper.

Some of the very first music 2016 Modern Drummer Reader’s Poll Top 5 Progressive Rock Drummer Jonathan Schang (of Chicago’s District 97) ever heard was the 1979 Bruford album “One of a Kind.” His father played it repeatedly in his youth, and the album’s blend of crisp drumming, dexterous bass, lush keyboard soundscapes, and sinewy guitar lines immediately intrigued Jonathan. Having very little point of reference though, he assumed this was just how instruments were played! After maturing and hearing more music, Jonathan came back to this album and realized it was truly “One of a Kind” indeed.

When District 97 bassist TIm Seisser took on organizing an Allan Holdsworth Tribute on the first anniversary of his passing this year, he asked Jonathan and Andrew Lawrence (D97 keyboardist) to participate. Among other songs, the group took on Five G from “One of a Kind.” Having had so much fun with that, the idea was born to play the whole album at Progtoberfest 2018. Come see this special (fittingly) one-ttme only performance! Also featured will be Cleveland-area guitarist Jeremey Poparad.

Möbius Strip is an instrumental band formed in Sora (Italy) in 2014 and made of: Lorenzo Cellupica (25) on keyboards, Nico Fabrizi (27) on sax and flute, Eros Capoccitti (24) on bass and Davide Rufo (26) on drums. Möbius Strip was born with the intention of exploring and mixing different musical styles, in particular the sound and the improvisations of jazz with the structures of prog, without disregarding the insertion of strong melodies and searching for its own identity anyway.

Arising from a sweat-drenched Halloween house party debut in 2011, Gramps The Vamp has become equally known for it’s “tight-as-a-rope funk” [My Spilt Milk] as for its dedication to break the funk mold and carve out its own genre. In 2014, a year after being named Best New Band by Chicago Reader on the merits of its demos and live shows, Gramps The Vamp released its self titled debut LP produced Sergio Rios (Orgone, Killion Sound). The album’s vintage-noir style, which the band half-jokingly calls “Doom Funk,” drew the interest of filmmaker Alaric S. Rocha, who used over half of the songs as the soundtrack for his 70s inspired horror film “Demonoid (1971)”. In 2016 the band released its sophomore effort, “The Cave of 10,000 Eyes”, which brings together afrobeat, deep funk, ethiopian-jazz, and spooky soul for a further exploration into the dark, wild, and strange side of the funk.

Little Atlas has really carved out its own unique sound amid the current progressive rock landscape, creating compositions that range from haunting and dark, to frolicking and frenetic. Little Atlas is a work in progress – an ever-changing sound reflecting the mood and will of its creators. Their music has been described as “Music for Musicians” (Miami Herald) and as “Esoteric, yet familiar, complex yet catchy, a thoroughly unique sound and approach to song crafting” (Florida Jam Magazine).”

The past is but prologue. Back in the early 90’s, three science students from the national university in Mexico City, Andres Aullet, Ricardo Gómez and Luis Nasser got together to form a band called RADIO SILENCE. From 1991 to 1994, the band played on, gaining a large cult following and a reputation for intense, unpredictable live performances. Inevitably, the band broke up, but the music and the meme lingered on.

In 1995, Nasser and Gómez moved to the East Coast of the USA under the pretense of pursuing scientific doctoral degrees, but all they really wanted was to find other players and continue what RADIO SILENCE had started. Two fruitless years later the search was abandoned and the two drifted apart; Nasser sulked in his apartment and alternated between writing music and working on his dissertation, while Gomez jammed and played with a number of different bands, ranging from punk rock to Spanish baroque troupes (which included the stretchy pants and full peacock garb).

In 1997, Nasser auditioned for a Baltimore-based band KURGAN’S BANE, led by guitarist Pete Laramee and his brother, drummer Jeff Laramee; a crisp, crunchy hard rock band of exceptional musicianship that had parted ways with their bassist and were on the eve of recording their debut album “Search from Sea to Sea”. These sessions resulted in a a good friendship between Nasser and John Grant of Secret Sound studios in Baltimore, and the later discovery of a vast network of websites promoting underground prog rock made him curious to find out what the internet crowd might think of the material performed by RADIO SILENCE, back in the smoggy, boozy daze of Mexico City.

Nasser and Grant set upon the task of embellishing a demo of original material recorded on 8-track tascam tape machine for release. During the course of this project, Nasser invited Gómez and Aullet back to the fold, and the end result was a disc called “Laughter In The Dark” which, to everyone’s astonishment, earned rave reviews, sold out in months, and inked the band a record deal with the now defunct indie label “Moonchild Records”.

Nasser’s musical chemistry with Jeff Laramee made his addition to the band as a full member in 1998 inevitable, and certain unfortunate legalities forced the band to re-name itself as SONUS UMBRA, which in pig latin roughly means “Shadows Made Of Sound”. Since then, they have released three more critically acclaimed albums: “Snapshots From Limbo” in 2000, “Spiritual Vertigo” in 2003 and “Digging For Zeros” in 2005.

SONUS UMBRA went on indefinite hiatus due to the stress of continued existence in spite of vast geographical limitations: Gómez returned to Mexico City in 2000 where he is professor of mathematics at the National University. Nasser is a professor of physics at Columbia, Chicago and remains committed to recording and performing with his main band MIGHT COULD. Aullet is coding furiously in Sandy Point Idaho and Laramee remained steadfast in Baltimore, drumming with Pete Laramee and running a warehouse with his unusual gifts as both stunt fork-lift driver and a master of depraved English.

Working intermittently with his close MIGHT COULD bandmate Andy Tillotson, he and Nasser wrote music that eventually became “Winter Soulstice”. The process began in late 2008 and concluded in April, 2013. A new incarnation of the band was formed with some of the most accomplished veteran musicians of the Chicago rock music scene, and is ready to release the first new album in 8 years and begin promoting the material live.