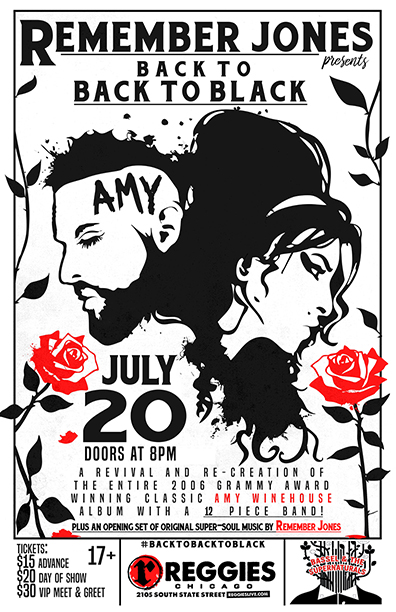 Remember Jones is a one-of-a-kind soul/pop singer, storyteller and bandleader with a throwback vibe and authentic energy that bring audiences to another time and place. Collaboratively supported by a double-digit sized band centrally from Asbury Park, NJ where they have a stronghold on it’s large, thriving music scene, he has packed popular venues such as THE STONE PONY, ASBURY LANES, THE SAINT, CONVENTION HALL and THE PARAMOUNT THEATRE. He has been awarded TOP VOCALIST in the Asbury Park Music Awards, directed and debuted as HEDWIG in HEDWIG IN THE ANGRY INCH for Asbury Park’s first long-running theatrical production, and has produced, music directed, and supported many local acts, rock musicals, and touring bands (most recently a string of sold-out dates with Buster Poindexter).

The band’s DEBUT ALBUM, “Ladies and Gentlemen, Remember Jones!”, available via CDBaby, iTunes, Spotify, Apple Music, and other outlets, was created after raising close to $19,000 through nearly 300 small donations via Indiegogo, and created in front of a live studio audience with a 25-piece band. It was released in May 2016 at Asbury Park’s Convention Hall, the first independent local band to play this venue in many, many years. POPDOSE calls the album “…uncanny magic… remarkable vocalist… Remember Jones is heading for big things.”

He fronts a tribute project “back to BACK TO BLACK”, a recreation of the entire AMY WINEHOUSE album with an orchestra of 15-25 musicians that has SOLD-OUT 3 times in Asbury Park, as well as a tour of the show packing venues in Brooklyn, Detroit, Louisville, Nashville, Milwaukee, Philadelphia, and more, including a sold-out show at LINCOLN HALL in Chicago that was streamed live by AUDIOTREE. He has SOLD-OUT a theater re-creation of JOE COCKER’s MAD DOGS & ENGLISHMEN with a 20-piece band and was the first ever to present and sing R. KELLY’s TRAPPED IN THE CLOSET LIVE alongside a 20-piece orchestra. His work with GRAMMY-nominated guitar legend and songwriter GARY LUCAS will lead to upcoming recordings of unreleased JEFF BUCKLEY material, following a successful string of dates recreating the entire GRACE album in July 2016 (Lucas co-wrote “Grace” and “Mojo Pin”). A recording session with Daytrotter was released in February 2017.

Audiences throughout the East Coast have jumped to their feet for Remember Jones’ tribute to JOE COCKER for the past 6 years as part of Glen Burtnik’s SUMMER OF LOVE EXPERIENCE TOUR, selling out 1000+ seat venues: THE COUNT BASIE THEATRE (Red Bank, NJ), MAJESTIC THEATER (Gettysburg, PA),THEATRE FOR THE PERFORMING ARTS (Patchogue, NY), INFINITY HALL (Norfolk, CT), EMENS AUDITORIUM AT BALL STATE (Muncie, Indiana), SHEA CENTER FOR THE ARTS (William Patterson University), THE STATE THEATRE (New Brunswick, NJ), and many more, with the show touring the midwest and more in 2016-7. As a member of other projects and theatrical events, he has played to rousing audiences in live music venues from WEBSTER HALL in NYC, WORLD CAFE LIVE in Philadelphia, SCHUBAS in Chicago, and more.

Whether you see him fronting a piano, a 4-piece band, or a soul orchestra of 25, Remember evokes the energy of the great front men and women, with one of a kind song styling (“the vocal child of Tom Jones and Patti LaBelle”, says award-winning singer/songwriter Glen Burtnik) and expert storytelling that keep audiences on their toes and emotions in the moment.

Bassel & The Supernaturals combines neo-soul and funk with captivating lyrics about love, loss, and a war in Syria that has affected Bassel Almadani’s family along with 10,000,000 others.

The soulful Syrian-American vocalist and his ensemble raised over $11,000 during the preorder campaign for their full-length album, Elements (2017), with over $3,000 in donations for humanitarian aid in Syria. Their album was premiered by Noisey (Vice) and led to their involvement in the nationally-acclaimed SXSW showcase ContraBanned: #MusicUnites featuring artists from the diaspora of the countries targeted by the travel ban. They’ve since been featured on PRI, Al Jazeera, Reuters, Paste Magazine, Huffington Post, NowThis, and many others. In addition to performing in clubs and festivals across the nation, Bassel partners with universities and charity organizations nationwide to host seminars, workshops, and benefit concerts drawing attention to the crisis in Syria.