The concert featuring Rose Tattoo is Rescheduled to July 19, 2022. All previously purchased tickets will be honored at the door on the new date. If you can no longer attend, refunds are available at original point of purchase upon request. Online ticket purchasers can email info@reggieslive.com for assistance with the refund. Tickets purchased in person at the Reggies box office can be refunded in person at the box office, located on the second floor at Reggies.
We would like to thank everyone for their patience in this uncertain time and hope we can safely see you again later this year for concerts. 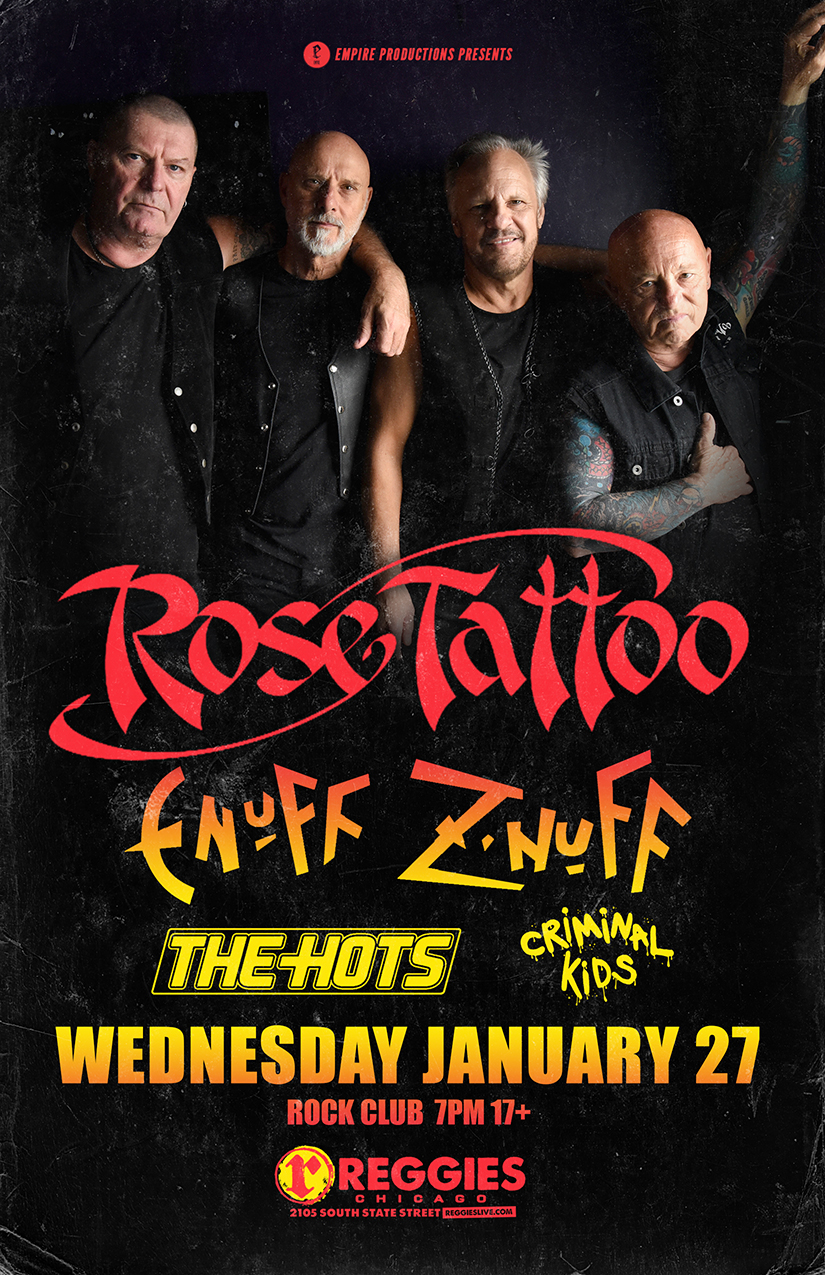 Rose Tattoo, the true rock and roll outlaws and first and last gang in town rumbled into existence in late 1976 with a New Year’s Eve debut at Sydney’s legendary Bondi Lifesaver.

With Wells on slide guitar and Rilen on bass, former Buster Brown singer, Angry Anderson was recruited along with rhythm guitarist Mick Cocks and drummer Dallas “Digger” Royal and they set about destroying eardrums and venues across Australia.

With the band’s enormous power came a level of internal combustion and in August 1977, Rilen left on the eve of the release of the band’s debut single for Alberts, Bad Boy For Love to form the soon to be equally infamous X

Geordie Leach who had played with Angry in Buster Brown stepped in to replace Rilen and the band’s classic self titled debut album produced by Vanda and Young was released in late 1978 with the killer singles, Bad Boy for Love, Rock n’ Roll Outlaw and One of the Boys.

Being one of the best live acts in Australia and offering up an album that made The Stones at their peak sound tame tragically wasn’t enough and Tattoo found the going tough in their homeland. Their banning from Countdown, the country’s top music TV show, allegedly after Angry and Mick Cocks appeared to kiss on camera, summed up their lot.

By 1979 Cocks and Leach had left and the band was down to a four piece with legendary Australian guitar maverick, Lobby Loyde on bass.

In an attempt to kick start the band’s career and trajectory, Loyde produced a second album in December 1979 titled Scarred but it remains unreleased.

Nothing seemed to work and one of the most unique bands on the planet was being damned out of existence.

Salvation was quietly at hand. Despite the outfit’s lack of success and recognition in Australia, their debut album was quietly gaining traction in France and Germany.

It was decided to reunite the line-up of Anderson, Wells, Cocks, Leach and Royal, record what would be the Assault and Battery album and unleash the band on audiences in the UK and Europe in 1981.

It was a masterstroke. In the northern hemisphere, Tattoo were finally showered with the respect and affection that had been cruelly withheld in Australia, their storming appearance at the Reading Festival in August 1981 a crowning achievement and powerful statement to all that the new metal gurus had arrived.

But mid way through the European tour, Mick Cocks left and was replaced by former Dallimore guitar beast, Rockin’ Rob Riley who brought with him a whole new level of volume and intimidation.

By that point, Tattoo were poised to be the clear and logical successors to AC/DC but the decision was made to return to Australia, record the Scarred For Life album and prepare for an all important American tour in late 1982.

While launching an assault on the UK and Europe had been a brilliant tactic, leaving before landing the killer blow was a critical miscalculation.

Despite doing dates with the likes of Aerosmith and ZZ Top, the Americans, more so than the Australians, didn’t know what to do when confronted with a bunch of beer swilling tattooed street toughs who played at skull splitting volume. Five years later Guns n’ Roses would take the world by storm with the ethos of Rose Tattoo but in 1982-1983, the US reaction to the Tatts was terror and confusion.

America effectively killed the band with Wells, Royal and Riley all leaving after they returned to Australia in early 1983.

Angry continued on with Leach and after recruiting new personnel made 1984’s Southern Stars album but much of the band’s original spirit was gone.

Anderson did the Beats from A Single Drum album in 1988 which was more of a solo effort and featured the hit, Suddenly and in 1990 released the Blood From Stone album, the Australian tour for which saw the singer reunite with Rob Riley to open for Aerosmith.

Pete Wells meanwhile was beginning to carve out an impressive solo career starting with 1991’s Everything You Like Tries To Kill You album.

In 1993, the stars aligned once more when the original line-up of Tattoo were asked to open for Guns n’ Roses to play two huge outdoors shows in Sydney and Melbourne before almost 100,000 people. Tatts’ drummer, Digger Royal had tragically passed in 1989 and so Oz rock veteran, Paul De Marco was drafted into the band.

The outfit kicked on powerfully from there including a near poetic appearance at Brisbane’s notorious Boggo Road prison.

Steve King, who like Rob Riley, always seemed destined to play with Tattoo, came in on bass on the eve of the band’s 2000 European tour with Kingys’ second gig a baptism of fire at the massive Wacken Metal festival in Germany which was immortalised on the 25 to Life album and also featured the return of Rob Riley.

The underrated Pain album followed in 2002 with the band’s most intimidating line-up of Anderson, Wells, Riley, King and De Marco.

But tragically Pete Wells was suffering from cancer – and he wasn’t alone.

Dai Pritchard filled in on slide guitar when Wells was too unwell to continue – he passed in 27 March 2006.

In a double blow, fellow founding member, Ian Rilen departed seven months later on 30 October after a bout with cancer himself.

With Mick Cocks back in the fold in place of Riley and now Pritchard permanently installed the Tatts soldiered on with 2007’s Blood Brothers album which included a killer version of Stevie Wright’s Black Eyed Bruiser.

When cancer also took Cocks on 22 December 2009, it seemed the Rose Tattoo circle had been permanently and irreparably broken.

But the body blows didn’t end there with drummer Paul De Marcos’ arrest in April 2014 and later imprisonment for alleged firearms offences curbing the band’s touring activity and placing the future in doubt.

A line-up of Tattoo however opened for Guns n’ Roses in Australia in February 2017 and stormed through an appearance at the Bang Your Head festival in Germany in July bathed in reverence from tens of thousands.

In the second half of 2017, after countless personnel changes in the preceding years, Rose Tattoo re-emerged like a phoenix from the ashes with their strongest line-up in more than a decade.

With the new lineup firing on all cylinders and making a space all their own, they decided to revisit history and what is sacred studio ground by re-recording and updating the band’s classic debut album from 1978 adding a few songs that should have had a place on the original record.

Mark Opitz, who handled the band’s original demos in the late seventies and engineered such landmark recordings as AC/DC’s Powerage and The Angels’ Face to Face, will produce the rebirthed album.

In March, the Tatts kick off a unique Australian tour with The Hard Ons and then in July, storm through Europe once more in their own right.

Honouring the past and striding proudly into the future, THE boys are back and right now, Rose Tattoo are as good as it gets and that’s no small statement.

Enuff Z’nuff has continually recorded and toured throughout their career of more than 20 years, releasing 12 studio albums and a total of 19 CDs to date. The band’s first single, “Fingers On It,” received some minor recognition when it was featured in the 1986 cult movie Henry: Portrait of a Serial Killer. Their songs have been recorded by several other musicians, some of which include Paul Gilbert, The Wildhearts, and Nelson. The band has a cult fan-base around the world which includes radio personality Howard Stern.

The Hots have been setting fire to the Los Angeles rock scene with their brand of youthful and aggressive rock ‘n’ roll. Playing the legendary list of venues that make up Hollywood’s honor roll, including The Whisky and The Viper Room, and opening for punk rock legends like Walter Lure (Johnny Thunders and The Heartbreakers) with Mick Rossi (Slaughter and the Dogs).

In 2019 The Hots filmed their second music video ‘Please Me’, an artistic tribute to motorcycle pop culture of the late ’60’s & early ’70’s with an emphasis on women’s empowerment. In order to capture the aesthetic and authenticity, working with creative director Meredith Devine, known for her Painted Lady series and photography work with brands like Harley Davidson. The video was brought to life by Giraffe Studios and with an all girl team. The ‘Please Me’ video was premiered at The House Of Machines in Downtown Los Angeles with artist Meredith Devine, in attendance were members of Guns N’ Roses and Nekromantix. Following the success of the video premiere, The Hots hit the road, touring the USA West Coast with Psychobilly super-group BAT! (feat. members of Nekromantix, Rezurex and Stellar Corpses).​

In 2018 The Hots launched their Self Titled EP at the world famous Whisky A Go Go in Hollywood and were nominated as one of LA’s Top 100 Unsigned Bands of 2018 by Music Connection Magazine. The Hots filmed their debut single’s music video ‘Before You’ with acclaimed Producer/Director Vashti Rosenberg: MTV Classic Australia, Channel V, Blink 182, Good Charlotte, Nickelback and more. ‘Before You’ was premiered on US radio by the legendary Rodney Bingenheimer and since then has been added to rotation on over 90 radio stations across the USA and Canada, charting at #1 on the US College Radio charts three times. The Hots EP debuted at #1 in Washington PA on WNJR.

Punk Rock from the Southside of Chicago.With nasty riffs and an attitude problem.