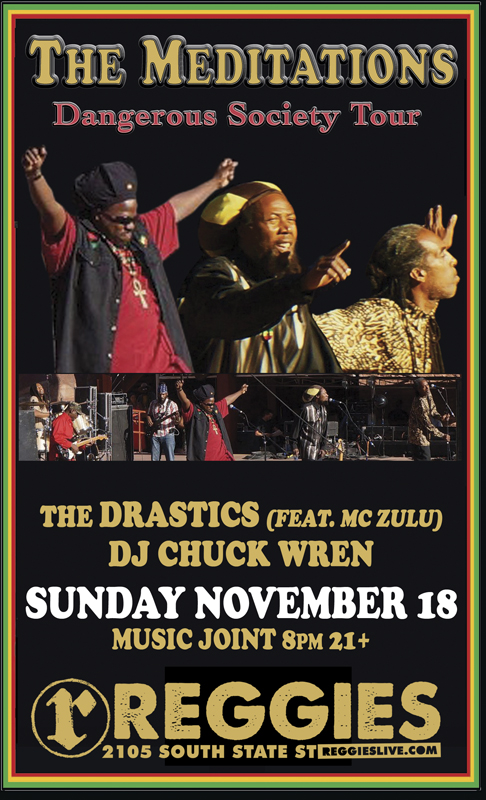 The Meditations – Ansel Cridland, Danny Clarke and Winston Watson collectively known as The Meditations, recorded their first hit single Woman is Like a Shadow in 1974 at Channel One Recording Studio; followed by Tricked, Babylon Trap Them, Woman Piaba and Running from Jamaica which were included on their first album Message from The Meditations produced by Dobby Dobson. Among other albums were Wake Up, Guidance, No More Friend, For the Good of Man, The Return of The Meditations and Ghetto Knowledge. The groups vocal and harmony style captured the hearts of reggae fans around the world and led to the collaboration of work with Lee Scratch Perry. Scratch, who produced for Bob Marley and the Wailers, asked them to do back up vocals for Funky Reggae Party, featuring Bob on led vocals. Bob Marley was so pleased with their harmony that he went in search for the group to do more back up vocals for him. He found Danny Clarke, one of the groups members, and put him in a taxicab and said, Me nuh wan you come back til you find the other two members. The taxi driver drove Danny to all the studios in Kingston and could not find the other members, until they drove to Idlers Rest, a street where all musicians and singers mostly hang out. When Danny saw Ansel and gave him the news that Bob Marley wanted the group to do back up vocals for him, Ansel thought it was a joke. Still, he and Winston joined Danny in the taxi, which took them to the studio where they added their vocals to Rastaman Live Up and Blackman Redemption. The Meditations did back up vocals on songs for other artist like, Jimmy Cliffs hit Bongo Man Youths Them A Cry; Gregory Isaacs, Mr. Cop and several songs with Junior Marvin and other reggae artist. The Meditations dedication and musical knowledge has helped numerous artist and producers developed their musical careers. In stores now on their own Meditations Music label; “STAND IN LOVE” delivers more passionate stirringly soulful ROOTS ROCK REGGAE from the legendary trio. ” STAND IN LOVE IN STORES NOW!www.meditationsmusic.com..

The Drastics are modern roots music. Their sound fits as easily in a Kingston dancehall as it does in an artist’s loft-party in the warehouse district. Though primarily classified as a reggae group, The Drastics embrace many styles of music both live and in the studio. This can be heard in their songs which draw from roots Jamaican music, hip hop, hard-bop jazz, afro-beat, dancehall, as well as folk music from Asia, Africa, the Middle East and South America. Take this powder keg cocktail of styles, add the pulse of gritty everyday urban living and you get one explosive sound. Not playing into any gimmicks or compromising to trends (“The Drastics deserve much credit for moving deep into unchartered territories” – allMusic Guide) The Drastics have been consistantly rocking crowds for three years from NYC to LA and everywhere in between (“dub masters, The Drastics … never fail to put on a killer party” – TimeOut Chicago).