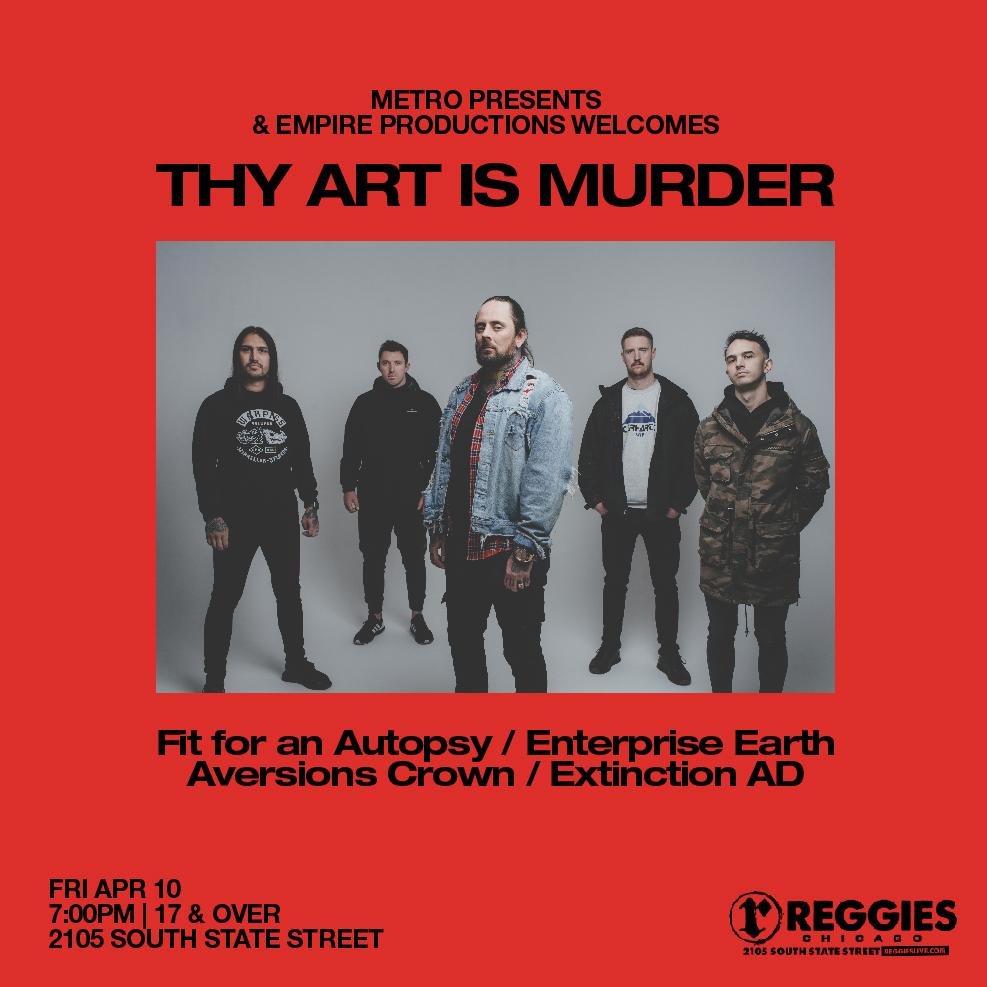 THY ART IS MURDER

Rising from the unhallowed wastes of Western Sydney, extreme metal outfit Thy Art Is Murder have carved a trail of bloody mayhem since their inception in 2006. With an acclaimed EP and debut album in Infinite Death and The Adversary to their name, the band have traversed the highways and autobahns of Australia, the UK and Europe on a relentless crusade to destroy every venue and audience they can with like minded peers in a who’s who of heavy metal.

2012 brings a new ritual offering of darkness from the five piece. Simply titled Hate, the band’s second full length is the pointed result of Thy Art Is Murder’s growing dissatisfaction with all aspects of modern life – political, religious, social and environmental – everyone is to blame. Fusing the blasting technicality of metal luminaries The Black Dahlia Murder with thunderous breakdowns and the intensity born of their nascent hometown scene; the blackened grandeur of Behemoth and the pit churning groove of Tampa originators Morbid Angel and Cannibal Corpse, the furious musical arrangements provide a bloody canvas for vocalist CJ McMahon’s outpourings of bile.

No strangers to stoking controversy and criticism, the band have not toned down their art for the sake of palatability and have introduced a morose melodicism into their maelstrom – the rumination before pulling the trigger. With their best work to date ready to be unleashed on an unsuspecting world, Thy Art Is Murder will once again take to the road to unleash the Hate with one simple message – get in the pit or get out of the way.

FIT FOR AN AUTOPSY

Corrupt politicians, manipulative mainstream media, government surveillance, mass shootings, clean water shortages, religious warfare, aggressive agribusiness, climate change, GMOs and a whole host of mind-numbing problems certainly make it feel like humankind is “going to hell in a hand basket,” as they say. There may be nothing that can be done about it at this point. But at least we have a killer soundtrack.

Fit For An Autopsy’s Hellbound is the perfect score with which to watch the flames rise. Punishing, unrelenting and alternately both heavy and dissonant, the New Jersey metal band’s first album for Good Fight/eOne conjures visions of Nero vigorously attacking his fiddle, even as Rome was engulfed in fire all around him. Esteemed English actor Michael Caine delivers perhaps the best line in Christopher Nolan’s “The Dark Knight” trilogy: “Some men just want to watch the world burn.”

Death metal often chooses to deal in devils, demons and horror-movie inspired gore. “Deathcore” detours into broken relationships and introspective issues, much like its scene cousins in Metalcore and alt-rock. Fit For An Autopsy blaze their own path, opting to address the dirty, gritty and grimy reality of modern day life. There’s no fantasy, no plaintive odes to lost love. This music is hell. These songs are Hellbound.

Scene queens, careerist cartoons and poseur-iffic hacks best step aside when confronted with the self-assured, art-for-art’s-sake vibe of Fit For An Autopsy. As MetalSucks observed early on: “The band’s brutal, glowering take on [deathcore] reminded [us] of the squandered potential of the genre. Hardcore grooves and swagger, when incorporated correctly, blend quite well with death metal.”

On Hellbound, Fit For An Autopsy expand upon their commanding approach to an often maligned subgenre by synthesizing the rhythmic experimentalism of Gojira, the aggressive post-Noisecore of Converge, the esoteric and meditative tribalism of Isis, a virulent dose of the New Wave Of Swedish Death Metal (At The Gates, Dark Tranquility, early In Flames), the legendary progenitors of Floridian death metal (Death, Morbid Angel, Cannibal Corpse, Obituary) and the “deathcore” acts who offer actual proficiency in the genre (Suicide Silence, All Shall Perish, Whitechapel).

Each nuanced building block is meticulously assembled together to form a near-perfect modern metal masterpiece, all with the confident vibe of a group of people making the music they want to make for its own sake, trends and “hype” be damned.

There was justifiable reason to be excited about Fit For An Autopsy from the start. The rich pedigree of its core members foreshadowed the momentous music that was to come. Guitarist Will Putney is an accomplished metal producer, mixer, engineer and cowriter. Putney’s fingerprints are all over currently relevant albums from Stray From The Path, Reign Supreme, Misery Signals, Vision of Disorder, Counterparts, For Today, Like Moths To Flames, and more. Guitarist Patrick Sheridan is rightly well regarded for his work on the fretboard as well as with a tattoo machine. The rhythm section of bassist Shane Slade and Sick Drummer-approved Josean Orta is beyond formidable.

The earliest rumblings of Fit For An Autopsy emerged on a 2008 demo. The self-released Hell on Earth EP arrived the following year, eliciting interest from Guy Kozowyk, The Red Chord vocalist and Black Market Activities label honcho. Kozowyk released Fit For An Autopsy’s devastating debut, The Process of Human Extermination, in 2011. Sputnik Music paid particular attention to Johnson’s dominating presence. “The dude’s a swamp creature,” they wrote of his “absurd” (in a good way) delivery. “When you hear him scream, it’s like, ‘What the —- was that?’ You realize whatever it is would probably eat you if you ran into it in the woods.”

The group’s seething contempt for modern society is rivaled only by the sonic bombardment dropped upon the unsuspecting all over Hellbound, a record that is equal parts challenging and engaging. It’s an album designed to make people feel uncomfortable, while at the same time, counter-intuitively soothed by its catharsis. Criminals, junkies and the systems that fail them; deadbeat parents; poisoned food; BS celebrities and false idols; they’ve all led humanity here. Hellbound draws a line in the sand. It’s a declaration that even it’s all going down the proverbial drain likeminded individuals can take some solace in the expression of shared rage.

A punishing technical deathcore outfit based out of Spokane, Washington, Enterprise Earth was founded in 2014 by ex-Infant Annihilator vocalist Dan Watson and ex-Takeover guitarist BJ Sampson. Taking their name from a confluence of Illuminati and other conspiracy theories, the band issued their debut EP, XXIII, shortly after forming. They released their debut album Patient Ø in 2015. Which featured guest appearances from Oceano vocalist Adam Warren — the LP reached number five on Billboard’s Heatseekers/Top New Artist Chart. Their latest album Embodiment was mixed and mastered by Buster Douglas Odeholm and came out in the Spring of 2017. Enterprise Earth has toured with Chelsea Grin, Whitechapel, Within The Ruins, Winds of Plague, Summer Slaughter 2016 and continue to make their mark in the metal/deathcore world.

The band formed in 2013 and has been releasing music and touring steadily since, as seen with Unearth, Municipal Waste, Havok, Testament, Exodus, Shadows Fall, From Autumn To Ashes, Toxic Holocaust, Kvelertak, Nuclear Assault, Venom, D.R.I., The Red Chord, Bane, Act Of Defiance, Cro-Mags, Voivod, Vision of Disorder and many more.

Their full length debut Faithkiller was recorded and mixed by Brett Romnes (I Am the Avalanche, Anthony Raneri), and mastered by Brad Boatright (Nails, Noisem).