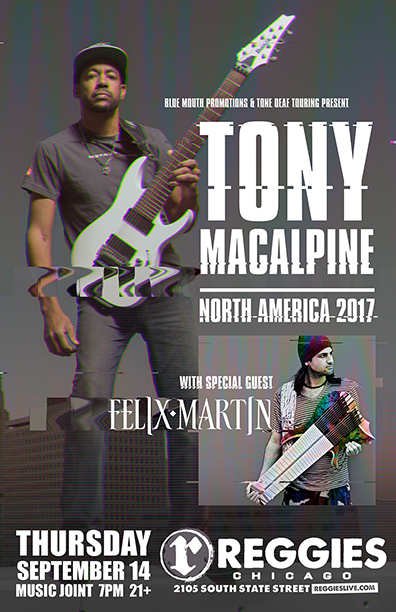 The name Tony MacAlpine is synonymous with modern musical virtuosity. Whether performing as a solo artist, band member, session player, touring hired-gun, or as a producer, Tony MacAlpine continues to prove that he truly is one of rock’s most amazing and versatile musicians. He incorporates classical, jazz and fusion influences into the hard rock/metal genre on both guitar and keyboards.

Felix Martin, an ambidextrous, Venezuelan-born guitarist who moved to America after winning a scholarship to attend the prestigious Berklee School of Music.
Felix is pushing music into new boundaries by mixing Metal with different styles such as Jazz, Progressive, World, Latin, Fusion, etc. Although his style is mostly called Progressive Metal, he is often cataloged as Jazz Metal, as he sometimes writes straight ahead Jazz mixed with Metal.
Felix uses his self-designed 14-string guitars, which are two regular guitars in one, standard guitar. Felix created a completely new way of playing the electric guitar by performing simultaneously with two of them as if was one guitar. This opens up a new and hidden world of the electric guitar. Felix pioneered this style of playing at the age of 13, and as of 2014, he remains the only one in the world who plays this way.
Felix and his band named under his name has shared the stage with acts such as Steve Vai, Mike Portnoy, Tesseract, Scale the Summit, Devin Townsend Project and have toured most of North America, South America and Europe.