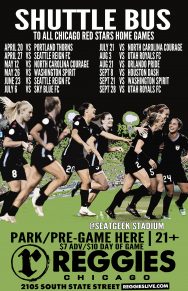 Ride the Reggies bus to SeatGeek Stadium to see the Chicago Red Stars take on the Seattle Reign FC! Reggies will open at 11:00am, bus will depart from Reggies to SeatGeek Stadium at 5:15pm for 7:00pm match. Purchase your bus shuttle ticket online or at the box office to guarantee your round trip ride to the game. Ticket is $7 in advance, $10 day of match. (Game ticket not included). Return to Reggies on the bus to join in the after party with fellow Chicago Red Stars supporters at Reggies!