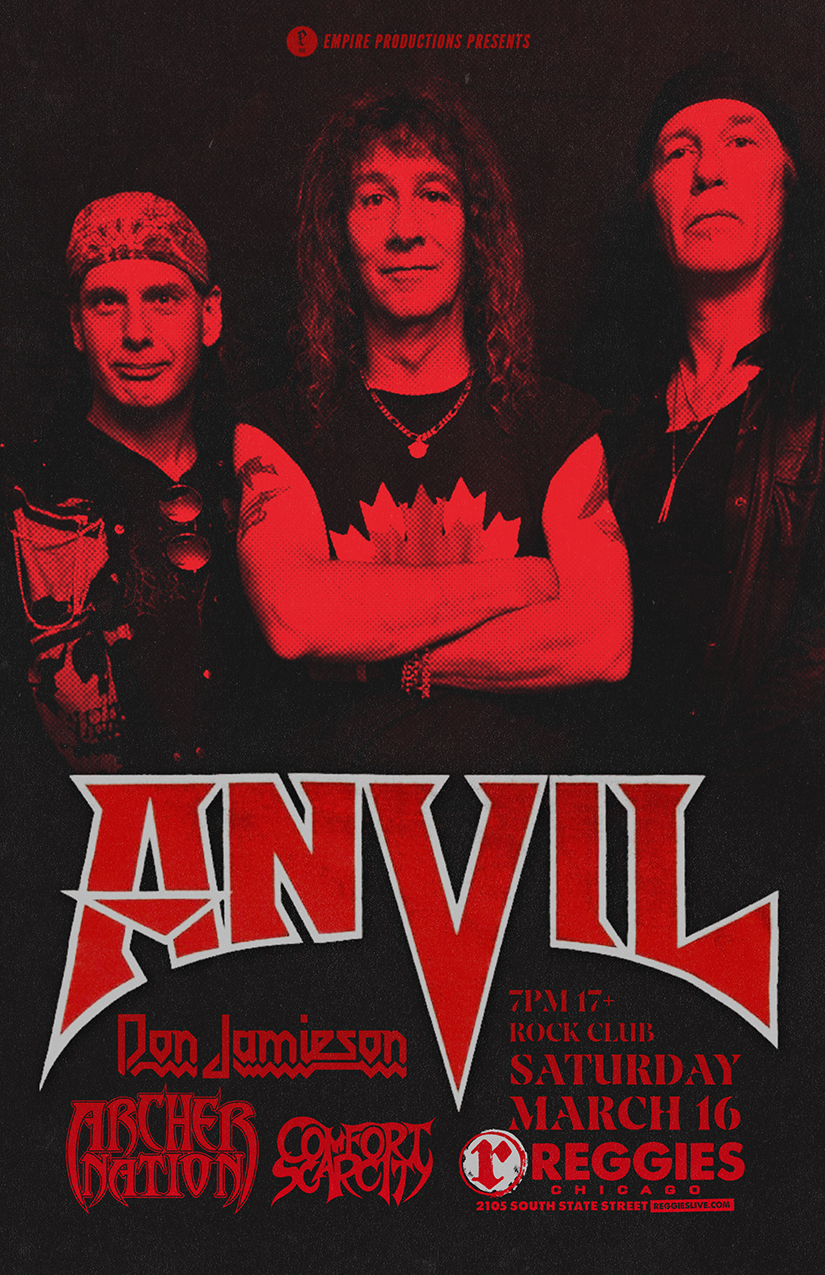 Anvil is Anvil! A self-confident statement. A band philosophy. And what’s more: a life motto. Anvil is Anvil, that’s the title of their latest album. And the name says it all: an unambiguous, uncompromising recording, typical of this band. At the same time it’s fresh, occasionally surprising and generally exciting through and through. A stalwart metal manifesto by a band who stand for authenticity and credibility like few others in this fast-lived business. “We’re sometimes criticised for never changing,” guitarist and vocalist Lips Kudlow explains. “But why should we change something we’re renowned for? Isn’t it much more important to stay faithful to yourself? To do what you do best? The idea behind our latest album is: we are what we are, and that’s how it’s going to stay!” For all Anvil fans, this is the best news of the year. And the all-important date for 2016 has already been scheduled: Anvil is Anvil will be released by Steamhammer/SPV on 26 February 2016. So be sure to mark the day in your diary!

Because Anvil is Anvil presents Lips Kudlow, drummer Robb Reiner and their new bassist Chris Robertson in a thoroughly magic metal moment. Kudlow: “Time will tell whether this album is the absolute pinnacle of our career. But I would already refer to it as ´gaining the momentum`. The year 2013 was a perfect new start for Anvil. We were touring, went on to write the new material, toured again and returned to compose some more. During that time, the new line-up gelled into a real unit. The arrival of Chris was just as significant for us as the film back in 2008. He helped me enormously with my vocal lines, which is why my voice sounds better than ever on stage and also in the studio.”

The same could be said of the new material. Anvil is Anvil sounds all of one piece and presents the band’s amazing diversity, combined with their conscious loyalty to the compositional DNA of their own classics. ´Die For A Lie` for example sounds like a contemporary version of ´Jackhammer` and the stomping ´Runaway Train` features the same directives as ´Smoking Green`, only based on Kudlow’s present-day maturity. “I practically graduated from the Bob Marlette University,” the Anvil frontman praises the American producer with whom the band recorded their 2011 release, Juggernaut Of Justice (2011). “Bob showed me how to write songs which really mean something. So when I started to compose this time around, I was perfectly groomed.”

Talking of which: Anvil is Anvil was produced by Martin ´Mattes` Pfeiffer (U.D.O.) at the Redhead 4 Studios in Pulheim near Cologne, Germany. For Kudlow, whose family is Jewish, as is drummer Robb Reiner’s, it was a special moment to work with a German producer in a German studio. “There’s a song on Anvil is Anvil that’s called ´Forgive Don´t Forget`, which says everything about our attitude. Nobody is guilty of anything that happened before their time, especially since Germany has critically examined and come to terms with its own past. Anvil have always been welcome in Germany, even during difficult phases. When we think of Germany, we think of friends, not war criminals.” Kudlow calls himself an idealist who takes a clear political stance with songs such as ´Gun Control` and ´Die For A Lie` and also denounces the ambiguous role of the church. He says: “Religion is frequently used to involve people in military conflict. Hate in the name of God – that’s just wrong!”

Don Jamieson is a stand-up comedian, television host, and musician. He known for co-hosting That Metal Show on VH1 Classic and playing with acoustic death metal band Gunfire-N-Sodomy.

From Santa Cruz, California, ARCHER NATION is a young touring trio determined to deliver genuine and unrelenting hard rock and heavy metal music to fans everywhere. Keyhan’s unique drumming, David’s masterful bass duties, and Dylan’s captivating blend of shredding and singing make for an exciting modern take on the genre while paying homage to the heavy metal inspirations that drive them. ARCHER NATION has worked hard to climb the rock and roll heap with no intention of slowing down as they continue to push towards greater heights, having already toured extensively in over 20 countries, and performed alongside some of the genre’s biggest acts.

Formed in the fall of 2014 Comfort Scarcity is a up and coming hard rock band from Chicago IL. Not wasting any time the guys have already been hitting the area hard with live performances just about every other weekend,studio sessions,and a whole lot of writing. After surviving the trial stage as band and receiving a great response from audiences, it is clear that Comfort Scarcity means business. Expect many performances this Spring/Summer and the first recorded material from the band.