REGGIES and MUSIC MADE IN AMERICA present the Blues ProJam Series

The Blues ProJam is a collaboration of some of the finest Blues musicians on the scene today. We start our once a month Blues Extravaganza with this stellar line up! We will be joined by invited top Blues artists from all over. 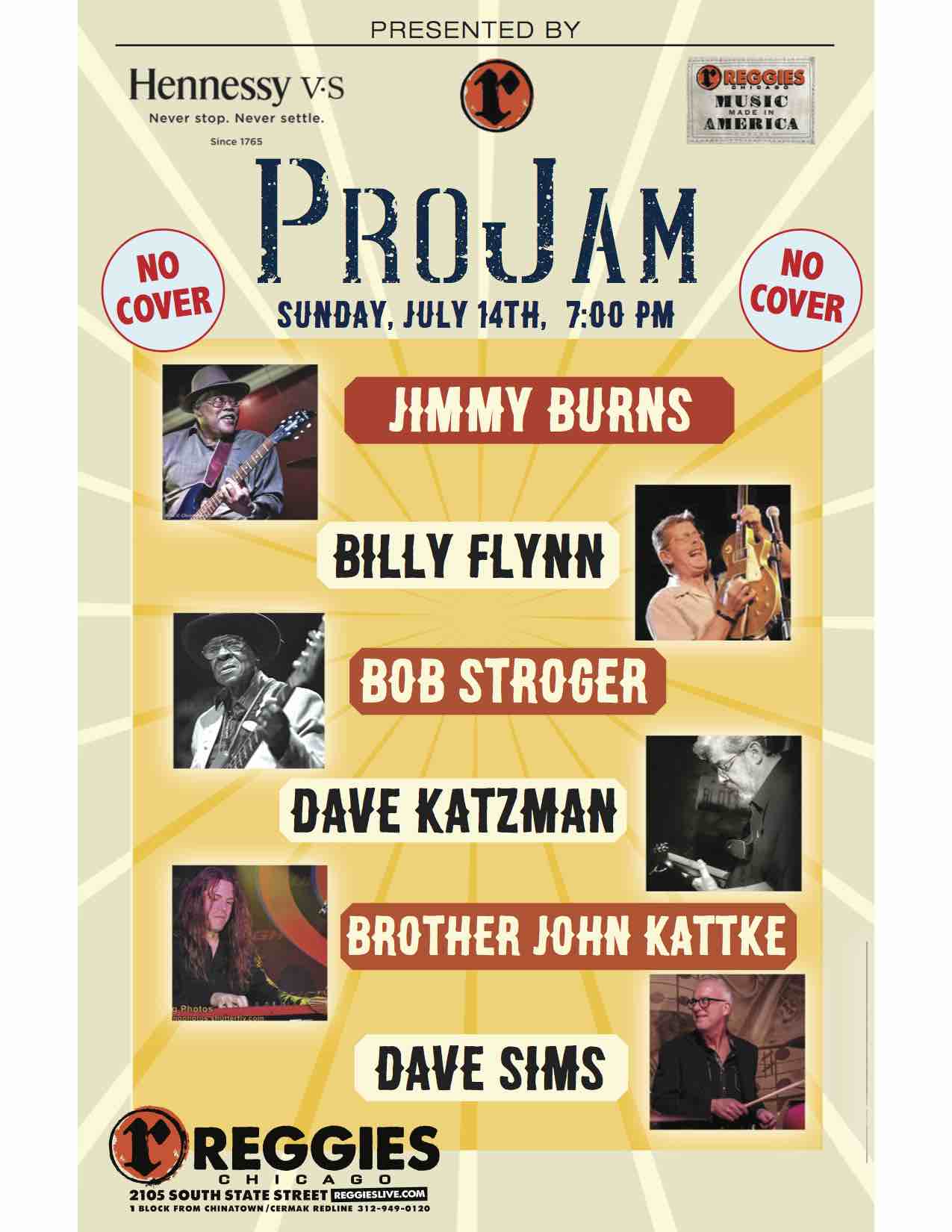 Singer, guitarist, and songwriter, Jimmy Burns is a contemporary bluesman who combines his Delta roots with R&B and soul to come up with a sound uniquely his own. Burns is a charismatic performer with an expressive, soulful, voice and a melodic guitar style to match.

Have Bass Will Travel…. I was born in South East Missouri in a small town Haiti, where I lived on a farm. I moved to Chicago in 1955. I lived in the back of a night club on the West Side, where Howling Wolf and Muddy Waters played. It looked like they were having a lot of fun and I made up my mind that what I wanted to do was play music. I got married at an early age and I used to watch my brother-in-law play music. His name was Johnny Ferguson and he and JB Hutto had a band they called the Twisters. They were working on 39’th and State Street in Chicago and I would carry them to work every night and watch them. Then at home I would try to teach myself to play. My cousin Ralph Ramey said that we should start a band and we did just that. We got my brother (John Stroger), who played the drums, to learn the songs we knew and in four months we were making some noise. We went to a club and played two songs and the man said we had a job. It was one of the better clubs, where musicians like Memphis Slim worked. The owner wanted us to wear uniforms but we had no money to buy them, so we got black tams and put a red circle in the top and called the band the Red Tops and that was the way it started. We got so good that they wanted the band to travel, but Ralph’s wife did not wont him to travel. so my brother formed a band with Willie Kent and myself and called it Joe Russel and the Blues Hustlers. We played together for a while,but eventually I decided to move on, because i wanted to travel more and see the world and I found out you can make money doing this. I joined a jazz band and played with Rufus Forman for about 3 years, but we were doing very little work. Then I met Eddie King and we talked. I told him I was in a jazz band and we needed a guitar player that could play blues. He sead OK and joined our groop, and we started playing blues and RB and things took off. We called the band Eddie King and King Men, and we stayed together for 15 years. Then we split up for about 2 years and later we started the band up as Eddie King and Babee May and the Blues Machine and we stayed together until Eddie King moved out of town. I quit playing for 2 years becouse we were so close I did not want to play with anyone but Eddie. Then I met Jessie Grean when I was playing with Morris Pejo and he liked the way I played bass and one night Otis Rush need a bass player, so Jessie said come and work with him. The rest is history. I have been playing music for 39 years and I am still having fun.

Dave Katzman has been working in the Chicago Blues scene for over 4 decades. He has traveled the world as an Engineer, Guitarist, Producer and Road Manager. Working with artists like Albert Collins, Buddy Guy, Albert King, Otis Rush and many others.

Brother John has played with Eric Clapton, Steve Miller, the Black Crowes, and acquired ringing endorsements from many other musicians of renown. For example: Led Zeppelin vocalist Robert Plant had seen John play with Otis Rush at the Jazz Café in London. When Plant and Kattke met in person at the United Center in Chicago, Plant told Kattke: “You play a mean guitar!” George Benson came to the jam session that Kattke hosts at Buddy Guy’s Legends in Chicago. After hearing the opening set that John played with his band, Benson told him: “You’re fearless! I thought I was fearless! You’re fearless!

Born and raised in Mississippi, David is an accomplished drummer, having toured the US, Canada and Europe extensively. David has recorded on Alligator and Blind Pig Records. Along with a strong Blues background, he has big influences in Country, Southern Rock and R&B music.

Open to teaching all age groups and all levels of players.

Started at the Old Town School in March of 2008