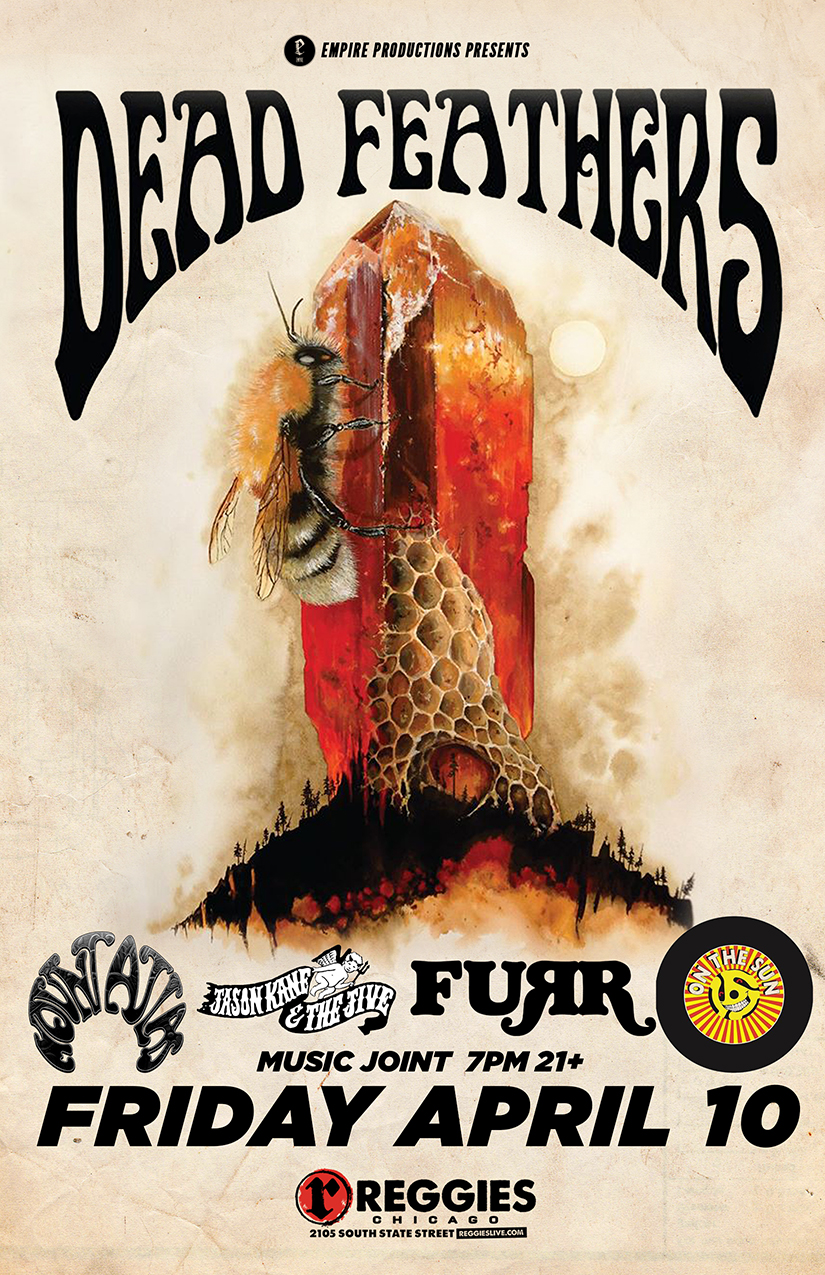 Ascend yourself into the blanketing incense smoke and celestial grooves that is Dead Feathers. Like the Night sky, this band is noting below a breath of fresh air. With melodic female Vocals and the Fuzz driven riffs you might as well be seeing the fortune teller herself when you see this band live. This band takes hold of you and does not let you go. Dead Feathers has shared the stage with countless Chicago bands and touring bands from all over North America alike. A group heavily influenced by rock bands of the 60’s and 70’s and the underground Psychedelic bands of today, They are currently in the process of recording their first EP and playing in venues across Chicago.

In 2013, Jason Kane started as an acoustic artist, travelling and playing wherever he could with whoever he could. One year later, he crossed paths with bassist Nick Jive and formed Jason Kane & The Jive. In the Spring of 2015, they released their 1st EP and proceeded to tear up the Texas rock scene. Over the course of the next two years, The Jive had the honor to share the stage with many iconic acts, such as Ace Frehley, Moxy, Y&T, Dokken, Uli Jon Roth, and The Winery Dogs.
By 2017, after going through a revolving door of musicians and line-up changes, Jason Kane & The Jive released their self-titled debut album. Combining vintage sounds with modern elements, tracks such as “Courthouse Blues, “Crystal Ball”, and “How I Do” breathed new life into San Antonio’s underground rock n’ roll legion. In September of that year, they joined forces with drummer Thomas Chapoy, completing the line-up and re-enforcing the idea of the “power trio” in rock n’ roll.
In May of 2018, the trio entered the studio to record their sophomore album “Hellacious Boogie”, a ferocious full-throttle rock record fueled with funk, soul, and blues. Two high-energy music videos from the album premiered in the Summer, and the album was subsequently released later that year on October 26th.
The band’s continued determination to create and conquer is possessed by nothing but the music they live, breathe, and love to play. “Brothers and sisters; let me show you where it’s at.” – Jason Kane, Vocals/Guitars

FURR is George Coutretsis and Ryan Quilty. Born out of a love for all things heavy and loud. We like our whiskey cheap and our High Life’s cold.

And, on the 7th day, the Lord made Rock-n-Roll.