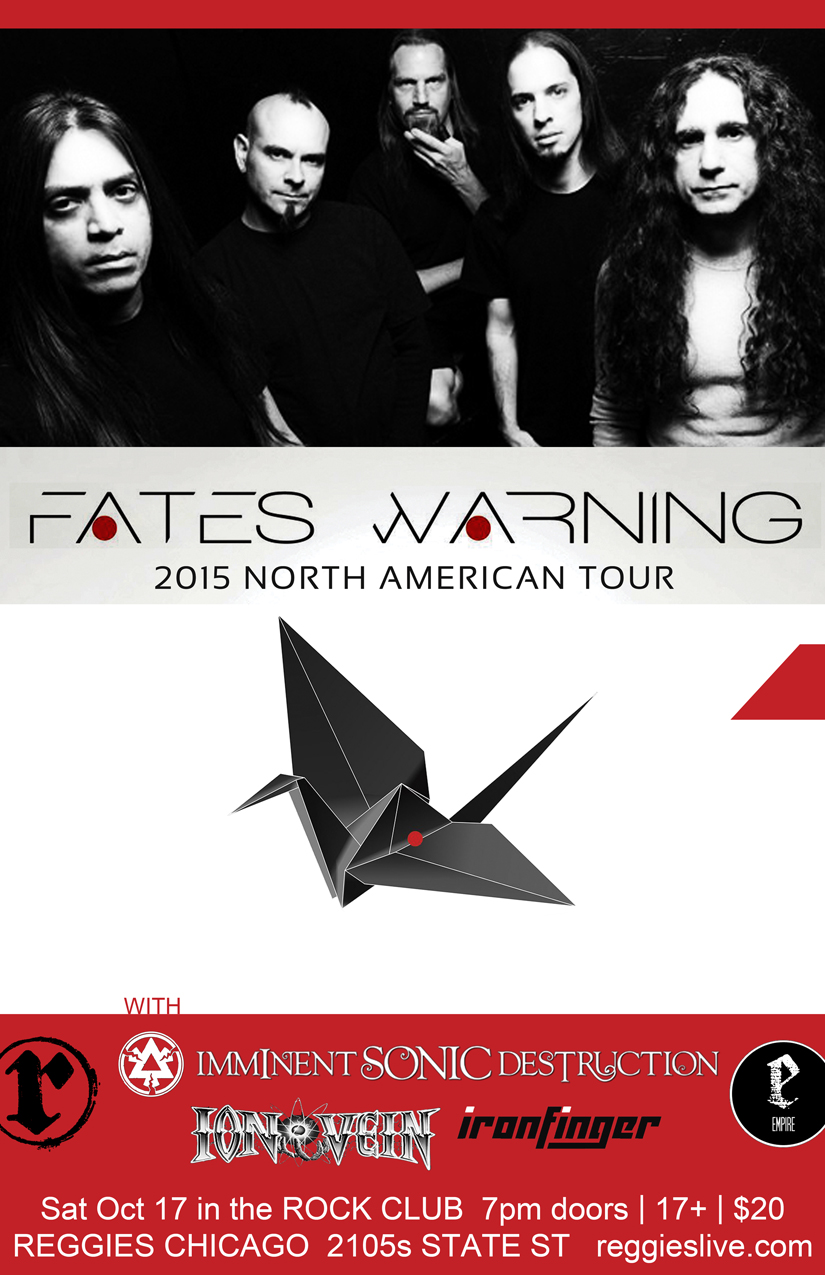 The legendary metal band Fates Warning began in the early 1980’s playing a traditional style of heavy metal. However, they quickly began to adopt a more technically proficient style influenced by Rush and are considered by many to be the first true prog-metal band.

While the band has subsequently moved in more melodic and ambient directions, they have remained a vibrant and well-respected cornerstone for the prog camp within the heavy metal strata.

Imminent Sonic Destruction is the brainchild of Detroit-based guitarist, vocalist and metal innovator Tony Piccoli. Influenced by the raw power of bands such as Strapping Young Lad, Meshuggah and Pantera , as well as the disciplined complexities of progressive groups like Dream Theater and Genesis, Piccoli set out to change the face of metal. His blend of crushing guitars, ethereal overtones, a combination of vocal styles and wonderful melody are wrapped in subtly complex time signatures, skull-crushing guitar riffs, and melodic hooks so memorable that you will need surgery to get these songs out of your head.

After playing in several bands while living Arizona in the 90’s, Piccoli moved back to his hometown of Detroit, Michigan. He began writing songs that would become the blueprint for Imminent Sonic Destruction’s sound. After years of writing the music and working on perfecting the sound, Piccoli hooked up with local musicians to record two demo discs titled The Umlaut Speaks & The Umlaut Doth Spake which Piccoli himself says both are “fucking certified.”

In 2007 Imminent Sonic Destruction made the leap from a recording project to a fully fledged live band. Joining Piccoli is a veritable super group of Detroit area progressive and metal artists. First to sign on was former Tiles drummer Pat DeLeon who has recorded with Tiles on the Magna Carta and InsideOut music labels and well as touring Europe as the opening act for Dream Theater.

Solidifying the rhythm section is Bryan Paxton, who is a powerful metal force in his own right playing with Detroit metal bands JustDefy and Miles Beyond. Next to sign on was keyboardist/vocalist Pete Hopersberger from the Detroit progressive rock group Space Nelson. Pete’s musical knowledge and pure talent takes the Imminent Sonic Destruction sound to the next level. Rounding out the lineup is guitarist/vocalist and all around musical chameleon Scott Thompson. Scott has played numerous instruments in numerous Michigan groups as well as being an established solo artist.

A wise person once said, “the only constant in this world is change,” and after releasing two albums, Beyond Tomorrow (Majesphere) andReigning Memories (Majesphere/Now&Then UK), the members of ION VEIN, were faced with one of the biggest changes of their career..the search for a new vocalist.

Guitarist/founder, Chris Lotesto explains: “The writing for the third album, sparked by the addition of Chuck White (ex-Michael Angelo Batio/ex-Winterkill) on drums, and the return of original bassist, Brian Gordon, proved to be the most inspired, unique, aggressive, and energetic music to date, the new ION VEIN began to take shape!” However, as things progressed, this newfound sound and energy also lead to the realization that these songs needed something different vocally. Lotesto continued, “The decision to part ways with original vocalist, Russ Klimczak, was incredibly difficult for all of us. He’s a great friend and we shared so many great memories together, but the new material called so strongly for us to move in a different direction that we felt this was the right thing to do for the band.” The band was also forced tomake another very difficult decision in parting ways with Gordon (who did play bass on all studio tracks) at the start of 2010 due to professional differences; he was later replaced with Rob Such (Twelfth Gate/ex-Syris).

So began the search for one of the most elusive elements in any band, an amazing lead vocalist. “It was quite a frustrating period to say the least.” adds Lotesto, “We had a lot of ups and downs, even some good potential vocalists, but when I found ‘the’ email from Scott Featherstone (Enertia/ex-Attica USA) in our inbox, I knew things were about to get really good!” Lotesto had been a huge fan of Featherstone’s since ION VEIN started playing shows with Enertia, and as luck, or fate would have it, the time was right for the two to join forces. White also added, “After hearing three tracks from Enertia’s “Force” album, I immediately knew that Scott was the guy as well!” Lotesto continued, “We were totally stoked, to say the least; IV was reborn and stronger than ever!”

Featherstone immediately began working on vocals demos to the already completed basic tracks at his home studio in upstate New York for what would become the first three songs to be released; Enough, Love/Hate, and Anger Inside. The band entered the studio once again with Grammy winning producer, Neil Kernon (Queensyrche, Judas Priest, Nile, Nevermore) at the helm in November to lay down vocals for those three tracks and have since continued working on and developing the rest of the material.

In September 2011, ION VEIN announced their partnership with Chicago based Mortal Music to release their new music world wide. The first release is a three song DR (digital release) simply entitled “IV v1.0” and is a powerful introduction into the new phase of the ION VEIN story.

The DR concept was developed by Mortal Music as taking a snap shot of an album of music and releasing it into the market a “chapter” at a time, so to speak, to allow it to work its way into the marketplace faster and to help alleviate the musical overload fans and press alike are experiencing these days with so many options available. The full length album will then be available on CD at the end of the cycle for those that still collect physical product. Added Lotesto; “We really like what the guys at Mortal have going on and think their approach to the new musical marketplace is exciting and innovative! We’re really glad that we can be a part of helping to shape the way music can be presented to fans these days in the ever changing world of music!”

“IV v2.0” was release in December 2012 thus continuing the next chapter of the ION VEIN story leading up to the long awaiting full length album simply entitled “ION VEIN” that was released in July 2014. The album contains 12 songs which include re-mixed/re-mastered versions of the six songs from the digital EPs.

ION VEIN’s new music is laden with infectious grooves, catchy hooks, dynamic shifts, and intense “in-your-face” musical and rhythmic energy. Coupled with Featherstone’s melodically guttural vocal magic this creates a sonic experience that has been missing from modern heavy music for far too long, so be prepared to crank it loud!

When the IRONFINGER pokes you, you will step back at first. Immediately after, you will step forward to accept the challenge and take a better listen at exactly what the FINGER is telling you. IRONFINGER will blast you to the core with its direct assault on the senses. IRONFINGER is hard-driving rock, chock full of relentless guitar riffs and jagged instrumental and vocal melodies.

P.K. Ripper, guitarist of Chicago progressive metal legends Slauter Xstroyes, assembled IRONFINGER along with guitarist Jerry Buczko and bassist Bill Dixon. Their intent is to burn down an audience as if a scorching 85 mile-an-hour wind of fire were charging from the stage. Their front line of blistering guitar runs are precise yet unpredictable, serving only as a full-throttle thrust into one of their many blasting groove-heavy rhythms. Drummer John Ashe antagonistically encourages them to forge forward with his heavy-handed slamming, pushing and pulling without remorse. With the addition of vocalist Fred Morg, IRONFINGER stretches melodies up and over the entire machine, as well as weaving a melodic thread through the counterpoint. Their lyrics, bringing insight to a world losing touch with its human element, are made more meaningful when the IRONFINGER audio assault pushes it forward.

IRONFINGER’s sound is derived from its members’ varied backgrounds. Each members is a seasoned veteran of the hard rock music scene, having merged together from different corners of Chicago’s rock scene. Whether it be Rock, Punk/Pop, or Metal; and the interaction is still seamless and honest without sounding like a dysfunctional melting pot. IT JUST ROCKS.

The FINGER is on the trigger, and its shooting will be rapid and focused. Every IRONFINGER live show wins over its audience, and their soon-to-be-released debut will do the same in 2014. With its seemingly endless arsenal of musical ideas and conquered goals, IRONFINGER WILL POKE AT YOU.