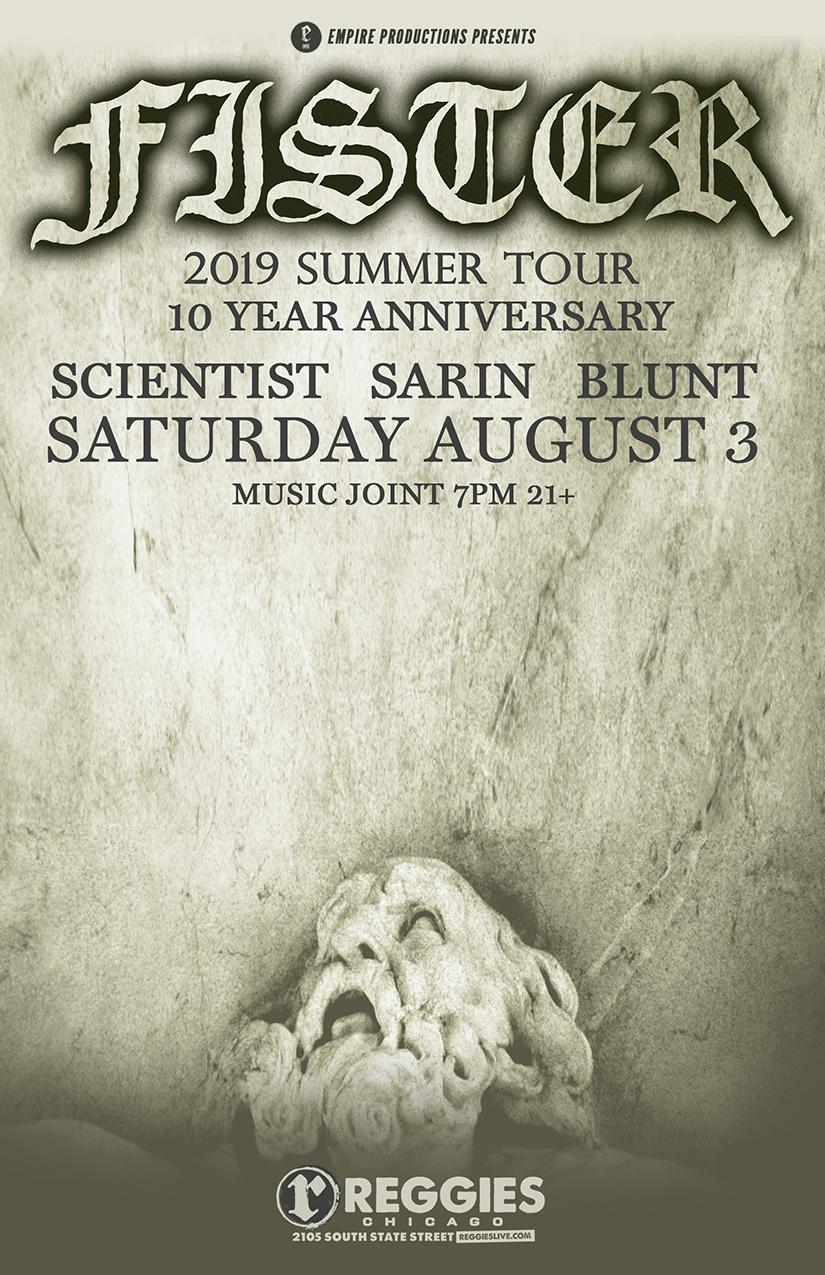 Hailing from the confluence of infectious disease, arbitrary violence, and rivers of industrial filth that is St. Louis MO, FISTER have been sublimating their brutally toxic environment into a deliberate and belligerent challenge to the eardrums since 2009. Comprised of drummer Kirk Gatterer, guitarist/vocalist Marcus Newstead, and Kenny Snarzyk on bass and vocals, this trio converts an eclectic swarm of extreme metal influences into the sonic analogue of trench warfare. Concussive, bloody, exhausting. Honed to grisly sharpness through years of performance, they have shared countless stages with countless musicians, including supporting sludge icons Eyehategod and Crowbar and appearances at the SXSW, Psycho Las Vegas, and Roadburn festivals. Pairing their seismic live offerings with more than a dozen releases, they have literally poured their blood into the work along the way – for their 2012 EP ‘Violence’, the band members had blood drawn and mixed with the ink used to print the liner notes.

From the hazy bulldozer bongripping of debut LP ‘Bronsonic’ to 2015’s impossibly dismal ‘IV’, a gruesome and lysergic 44 minute long single track that tests the limits of adjectives like heavy or bleak, their sound is continually (d)evolving. Consistently finding new ways to hit bottom in a sequence of splits with fellow underground juggernauts Dopethrone, Primitive Man, and Teeth among others, FISTER has emerged as one of the nastiest strains of doom metal, adept at fusing the narcotic tension of drowning in misery with the planet-splitting intensity of devout amplifier worship. Producing metal so poisonous, polluted, and nihilistic that sludge-doom-funeral-death are the only labels that can hang, the midwestern outfit are overpowering and relentless at city-leveling volume like a Sisyphean artillery brigade cursed to push two hundred tons of speaker cabinets uphill forever.

SCIENTIST — featuring Eric Plonka (EX founding member of yakuza) on guitar/vox with guitarist/vocalist Patrick Auclair, drummer Justin Cape , and bassist Mathew Milligan — draw heavily from the Windy City’s long-running tradition of experimental metal. The band members themselves describe their sound as “architectural metal.” Were listeners to ponder this description alongside the band’s sound, they would imagine twisted beams, exposed glass diagonals, and post-apocalyptic concrete blocks with a decaying skyline and crimson horizon in the distance. If SCIENTIST‘s sound is architectural, it is doubtless an experimental edifice. With their second full-length, 10100II00101, the adventurousness the band displayed on their debut album has now gone thoroughly and beautifully haywire adding guest vocalists to the mix venturing away from their mostly instrumental past. 10100II00101 will be released on CD and digitally via the band’s official BandCamp page and on double LP via Hell Comes Home Records at a later date.