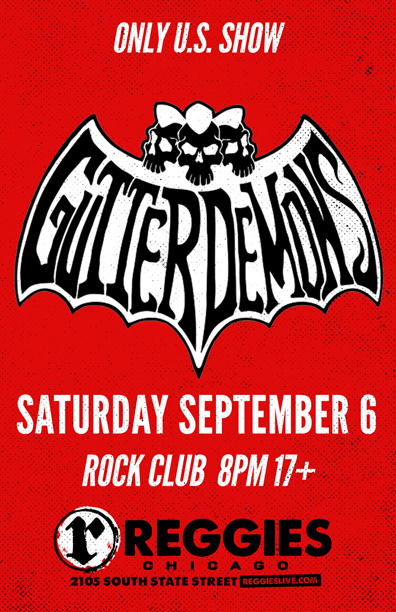 Since their unholy birth in 2001, Gutter Demons have been tearing up the scene across Canada, US, and Europe with their intense stage shows, raucous rock‘n’roll music, red-blooded rockabilly roots, punk potency, and downright dirty musicianship. Quickly becoming Canada’s most recognized disciples of Macabre, they have quickly gained a strong following by playing their unique brand of mutant Psychobilly.This hard working DIY three piece brought their unique approach to Psychobilly music. Often seen in some circles as uni-dimensional, the Demons psycho sound is refreshing and deeper than most of their contemporary peers. Playing the horror cards in a more subtle way, GD always took great pride in releasing rich & well written concept albums avoiding them to fall into the generic “zombie,hotrod, pin-up” category. The real madness happens on stage. GD is a fast & furious mean machine playing encores after encores even once clubs lights are on, no matter if there is a crowd of 10 or a 1000 people.

While songs like “Backseat Bomp” immediately conjure classic artists – think the Trashwomen, the Cramps, the Sonics and Wanda Jackson – Minneapolis-based four-piece L’Assassins never sound like a throwback. In just two short years the band’s surf- and rockabilly-tinged garage rock has landed them spots opening for Cherie Currie, the 5.6.7.8’s, Andre Williams and Ronnie Spector, as well as Dum Dum Girls and Detroit Cobras. The ladies also have two European tours under their belts (documented in the video for “Lovin’ on the Run”), having just returned from Spain in early 2014.

Creepy Band …. A pack of demonic wolves, slaves to the curse of the cloak, were called forth on hallows eve to reek havoc and inflict upon others their pain of satans wrath… And so Creepy Band was born on the Devils night.. The combination of guitar, bass, drums, church organ, and screaming vocals wove together in a dissonant harmony, loud yet maintaining a subtle eeriness not to be forgotten. They quickly realized that the horror must be continued and are now doomed to haunt Chicago venues forever with their distinct new genre of Creepy Rock n Roll.. Since that fateful day, Creepy Band has been working ever since. These slaves to the cloak have been playing shows, recording, and spreading the gospel in every back alley they find… Looming in the darkness of night, they have begun spreading the curse of the cloak and soon no human alive will be able to turn away…

Straight outta Tromaville, The Tromatons are here to Tromatize you with there brash brand of toxic wasted punk rock and roll!!!