21+ in Music Joint with Elbow Deep, Spare Change and Discarnate.

Stick around after the show for a FREE SHOW with Judas Rising in the Joint at midnight! 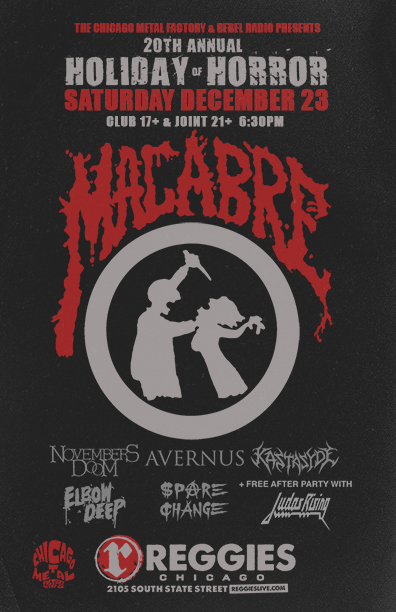 Spare Change was originally formed on the south-side of Chicago in 1989. The band plays their own unique style of raw hardcore punk / metal crossover. Through hard time and many lineup changes singer Bryan ‘Chump Change’ Robertson has managed to keep the beast alive, putting out over 20 releases in the process. The current lineup of Bryan on vocals, David Grek on guitar, Al Salad on bass and Fabian Arroyo on drums is the strongest to date. In 2013 the band put out their first release with its current lineup, Crash and Burn. This EP contains four tracks of straight up, ripping crossover and is the first sign that after 25 years Spare Change is still as relevant and as they were when they first started making a rauncous noise back in ’89.

Spare Change has had the pleasure to share the stage with the likes of D.R.I., Dead Kennedys, Grim Reaper, Riot, Black Death, Iron Reagan (Municiple Waste), The Addicts, The Casualties, Verbal Abuse, Fang, Toxic Reasons, Raw Power, The Effigies, CJ Ramone, The Mentors, Macabre, Helstar, Poison Idea, M.D.C., Necrophagia, Venom (inc.) and many others. They were the only punk/metal band to play the Taste of Chicago in 2001 and are currently working on there new album “Bonded By Beer”

Forged in flames in January 2015 by 3 former members of Chicago death metal band, Purge. Derangement has come to brutalize with an extreme blend of death metal and thrash.