This show has been canceled. Refunds at point of purchase. 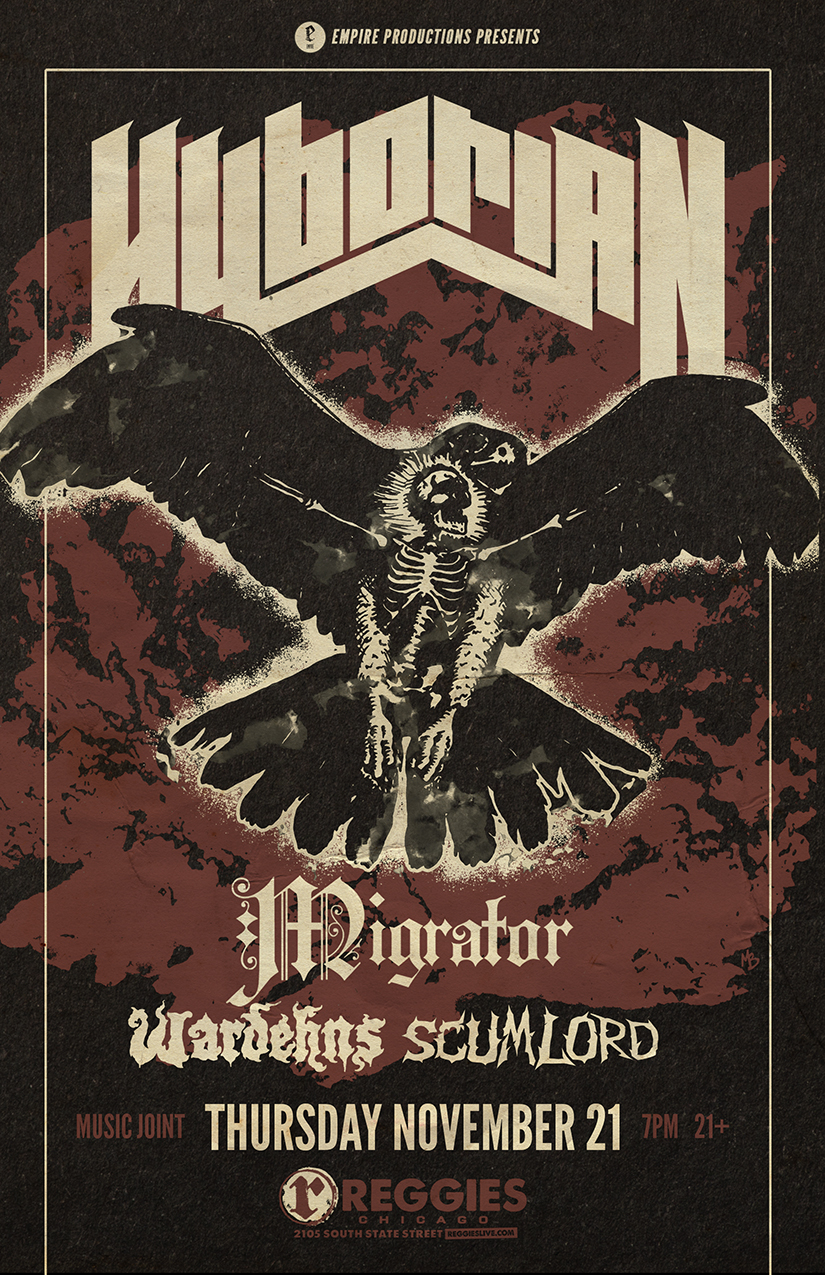 Swirling sounds and mysterious voices introduce Hyborian Volume I, drawing you in, as you wonder what’s going on in the audio depths. The moment the guitars burst into life on “As Above, So Below,” though – you’re hooked in. The opening cut on the debut release from the Kansas City quartet Hyborian is a powerful attack of guitar interplay, sure to appeal to any fan of High On Fire’s stoner riffage or the progressive lyrical strengths of Mastodon.

The recording is absolutely massive, but despite the stoner rock influences, there’s no sludge here. It’s clean. There’s not a bunch of effects on Hyborian Volume I. It’s stark and big: pretty much plug in, turn up, and go.

“We’re pretty big into old-school Metallica and stuff like that, but everybody in this band worships Matt Pike,” says the band’s frontman and guitarist, Martin Bush. “While we don’t really sound like Sleep, and we’re a lot more progressive than High On Fire is, that stark, straightforward raw aesthetic is really what we’re going for.”

To make Hyborian Volume I, the band built themselves a studio in the West Bottoms of Kansas City, rather than opting to put the money into recording somewhere else. It allowed Hyborian’s record to be exactly what they intended it to be.

“We thought, ‘We’ve got these songs – what are we going to do?’” explains Bush as to why the band put the money into something that can be reused and be a home for themselves. Everything on the record was written specifically for Hyborian Volume I, with the band choosing to move beyond old material.

Hyborian’s focus is now razor-sharp – Volume I is a very big thing, but it’s subtle. Writing a song like “Blood For Blood,” with its decaying cyclical chug is more than just a riff-a-thon. The in thing for heavy music nowadays is to allow space for a jam, while the band drones on. Hyborian writes something, then breaks it down into its component parts, and figure out ways to create melodies and countermelodies, chord inversions, all of which really set Hyborian’s songs apart from the pack.

Lyrically, they’re looking to the low fantasy, sword-and-sorcery pulp aspect of things like Robert E. Howard’s Conan stories to give the band’s songwriting focus and direction. They’re building a mythology with the band. Lyrics, artwork, and everything tie into their concept of an interstellar, extra-dimensional being called the Traveler – that cloaked figure on the cover of the record. Hyborian is the Traveler’s chosen mouthpiece for this time in existence. He touched history, and at this place and time, so the band tells his legends from the time before written language.

From its inception two years ago, Hyborian had always pretty much been Bush, fellow guitarist and vocalist Ryan Bates and drummer Justin Rippeto. They’d gone through a couple different bass players, but it took a while to find the right guy to become a permanent fixture, and take the trio plus one into a true quartet. When Anthony Diale joined the band last year, that’s what gelled Hyborian as a group, and when the band really figured out what their strengths were, and how to carve out their own space in a very crowded world of metal. Now that Hyborian is there, they know what they’re doing and where they’re at.

“If a Hyborian cult happened to pop up, that would be fine, too,” laughs Bush.

Misanthropic Doom from Lawrence, KS.
none of this matters

Wardehns, a three-piece heavy metal/sludge crust band from small-town Wisconsin, is coming out swinging with their new full-length Now Cometh The Foul. Comprised of vocalist and guitarist Adam Geurink, bassist Brad Beilke, and drummer Thomas Sorbet, the trio delivers eight grimy, brick-wall tracks in this follow-up to their 2017 self-titled EP. As Blessed Altar Zine puts it, this is “brutal, sludge-laden riffage that has a somewhat melodic drive about it, yet can’t help but rip your head off.” Channeling the likes of Inepsy, High on Fire, 3 Inches of Blood, Converge, and many more divergent influences, Wardehns pummels listeners with just the right mix of groove and force.
The outstanding punk encrusted intensity of ‘Denim Dogs’ makes it clear WARDEHNS are not fucking around! Sound wise, Sludge may be the template but speed wise WARDEHNS are all about an emphasis on a dirty punkish crust style cadence with a take no prisoners attitude.. This rips!