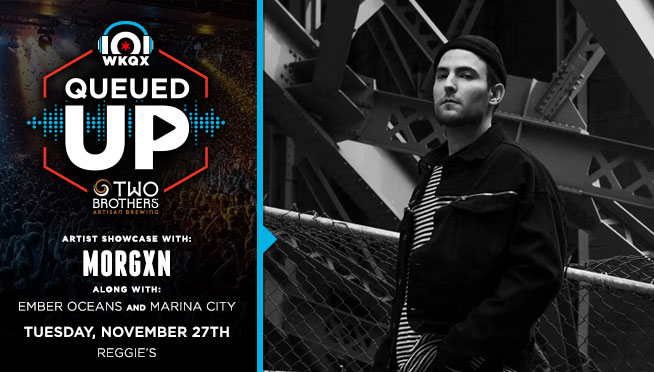 Alternative singer/songwriter Morgxn combines electronic atmospherics with a sensual R&B-influenced delivery, similar to Oh Wonder, Jack Garratt, Jon Bellion, and Bishop Briggs. Born in Nashville, the soulful artist grew up surrounded by music, guided by his grandfather, a former vaudeville singer. Based in both New York City and Los Angeles, Morgxn signed with Wxnderlost Records and released his debut track, “Love You with the Lights On,” in 2016. Later that year, he issued a cover of Duran Duran’s “Notorious” and the thumping rocker “Home.” The popularity of the latter — which spawned remixes by LEFTI, Joywave, and Toy Armada — helped the artist exceed four million online streams. In 2017, he issued “XX” and “Hard Pill to Swallow.”

Ember Oceans embodies a breath of fresh air in the indie synth-rock genre, seeing themselves and what makes a catchy pop tune through a new perspective. Their self-titled debut EP takes their warm electric groove for one hell of a joy ride that feels great the whole way through. Stop at the beach and surf through the rich harmonies and waves of reverb soaked synthesizer and guitar, popping like bubbles along to the crisp beats and bass that drive the songs on a roadtrip that travels through summers of influence and sound. Ember Oceans does not want you to just listen to their music, they want you to take it on vacation and have the best trip you’ve had in years.

Marina City’s blend of R&B and alternative pop create infectious and commanding choruses that have garnered this Chicago based sextet their dedicated fanbase. Fusing elements from their diverse, multi-cultural backgrounds and influences, Marina’s City’s high energy live shows engage and energize crowds of all musical tastes. Brooding synthesizers reminiscent of The Weeknd sweep through the songs, while biting and soulful Motown-esque vocals dance over the top. Following the lead of bands like Imagine Dragons, X Ambassadors, and Fall Out Boy; Marina City walks that fine line, from “mainstream alternative” to “top 40 pop.” Nationally renowned festivals, such as Riot Fest, Warped Tour, and PIQNIQ have had Marina City grace their lineup. Singles, “Better Weather” and “Man In The Mirror” have been on rotation nationally for Cumulus radio stations and “Dreamers Never Die” can be heard at Chicago Bulls games. Their musical distinctiveness has earned the six-piece praise from the likes of MTV News, Alternative Press, Rock Sound, the title of Band of the Year by the Chicago Nightlife Awards and Ernie Ball.