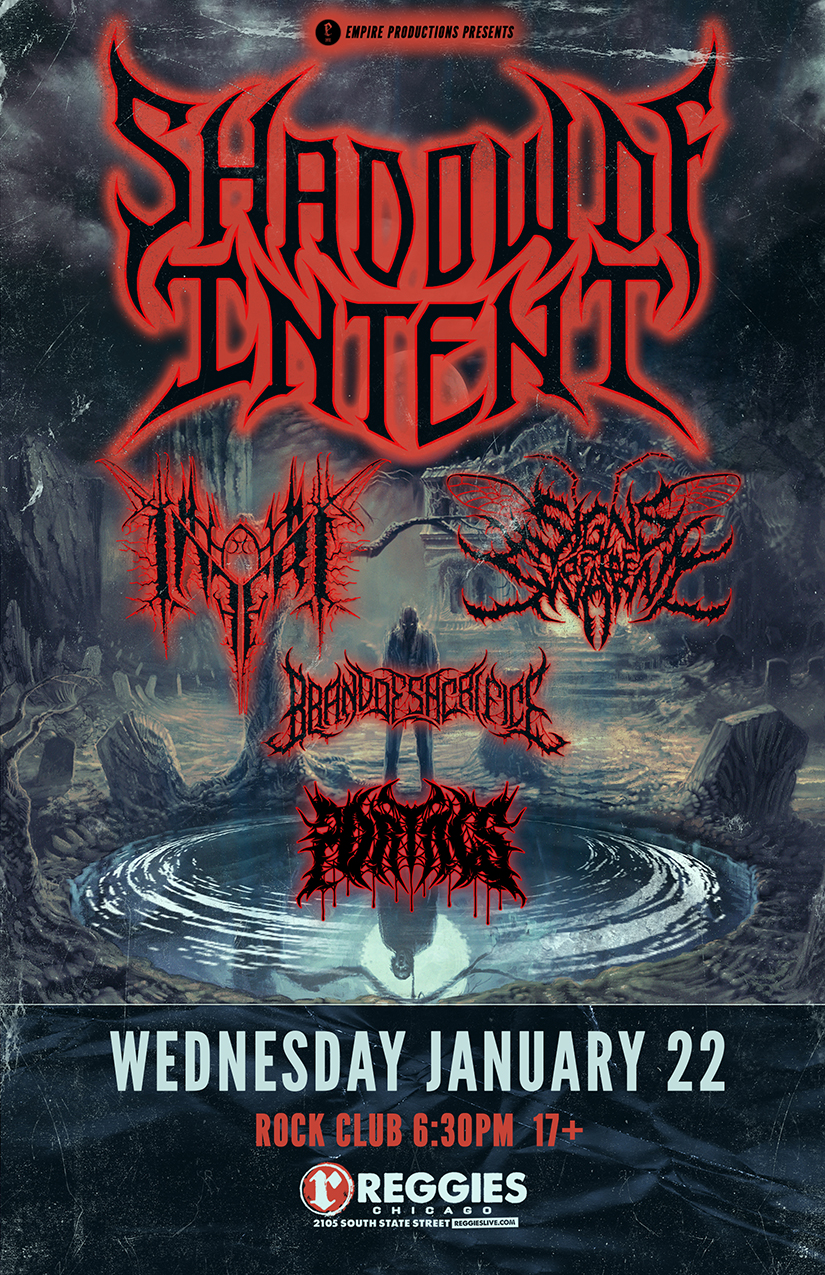 Shadow of Intent was formed in 2014 as an internet-based project between vocalist Ben Duerr and instrumentalist Chris Wiseman. The band released their first EP called “Inferi Sententia” on July 18, 2014 and continued writing more music for the album that would be called “Primordial”.

In 2015 the band started releasing more songs and followed up with full length album “Primordial” on January 10, 2016 which rapidly started gaining traction on the internet. Over the next year the album “Reclaimer” was written and the lineup changed gears adding live members to perform in the music videos and eventually live shows.

The second studio album “Reclaimer” was released independently in 2017, selling 1,300 copies in its first week, and to this day has amassed over a million streams. In October the band announced its debut performance in December which would sell out the Webster Underground in Hartford, CT. Shortly after, the band was recruited by JJ Cassiere of the booking agency 33 and West. He started putting the band on national tours with metal acts such as The Black Dahlia Murder, Whitechapel, Carnifex, Oceano and Fleshgod Apocalypse.

Inferi is an American melodic death metal band forged from the bowels of Nashville, Tennessee. The band formed in 2006 and strived to merge the classic melodic metal sound with a taste of crushing technicality. After releasing Divinity in War in 2007 and The End of an Era in 2009, they experienced an overwhelming ripple of hardships, causing the band to lay dormant in an unforeseen state of hibernation. In 2011 the lead guitarist, Malcolm Pugh (A Loathing Requiem, Diskreet, Ex-Enfold Darkness) decided to reignite the fire. Recruiting Mike Low (Oubliette, Ex-Enfold Darkness) on guitar and Jack Blackburn (Ex-Vital Remains, Ex-Enfold Darkness) on drums, the plan was clear – musical annihilation.

Inferi sets themselves outside of the generic pack by mixing melodious, yet technical musicianship with virtuosic songwriting rarely since in today’s extreme metal acts.
In Early 2014, Inferi released their third effort, The Path of Apotheosis. The band is currently in the studio recording their fourth epic release.

SIGNS OF THE SWARM

Signs of the Swarm is a five-piece death metal horde hailing from Pittsburgh, Pennsylvania. “With the release of their debut album Senseless Order earlier this year, they’ve already begun to gain national attention. The mood and ambience are consistent and the breakdowns and build up to them are flawless. Vocals are absolutely incredible.” – Sputnik Music

We are a heavy band from central Illinois.