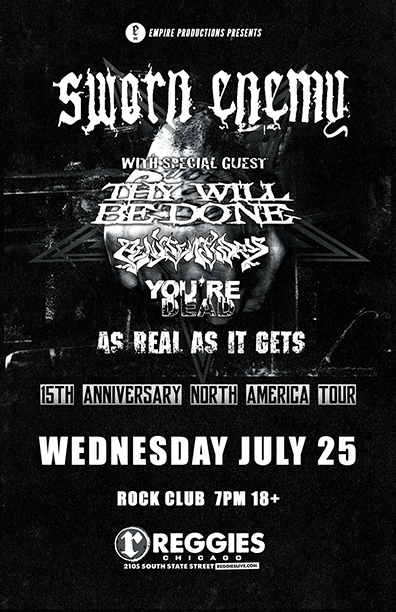 Sworn Enemy, fronted by Sal LoCoco, established itself in 2000 with the release of “Negative Outlook” on Jamey Jasta’s Stillborn Records. The record was a mix of old school hardcore punk and new school breakdowns, and quickly gained the band attention in the underground scene.

2002 marked their next release, “Integrity Defines Strength”, which contained 3 new songs and a live set from the legendary New York venue, CBGB.

In 2003 a release deal with Elektra Records was signed with the result being the break through record “As Real As It Gets”. The band changed their style as the CD featured a large thrash metal influence, as well as abrasive, near-black metal vocals. The new style and worldwide distribution led to the spawning of two videos for the songs “As Real As it Gets” and “Sworn Enemy.” The band earned their place on major tours with Sepultura, Anthrax, Soulfly, Biohazard, Fear factory, Six feet under, Hatebreed and many others around the globe including a stint on Ozzfest in 2003.

In early 2005, the LP “The Beginning Of The End” was released on Abacus Records, (Century Media) The new record expanded on the thrash influenced direction the band had been moving toward. During this period the band toured alongside As Blood Runs Black, Too Pure to Die, Suicide Silence and appeared on the highly anticipated Earth Crisis reunion tour. This record also saw the release of two videos in the forms of “Scared of the Unknown” and “All I have.”

2008 marked the band releasing new music once again with the disc entitled “Maniacal.” The disc featured some of the fastest & heaviest material to date. Tracks “Ignorance” and “Destroyer” quickly became staples of the bands live set. March 29, 2008 saw the release of the video “A place of Solace.” (Dir. David Brodsky and edited by Allison Woest)

In 2009, “Total World Domination” was released through Century Media Records. The record was produced by Tim Lambesis from As I Lay Dying. The concept was to fuse the bands previous records into a sound that is way faster, more aggressive and harder than ever.

During the summer of 2010 the band embarked on a headlining tour across Europe along with support slots at multiple festivals. This would be the first Sworn Enemy tour with current drummer Danny Lamagna. Later that autumn, the band with addition of guitar player Jeff Cummings toured the east coast of the United States for what was the last leg of the “Total World Domination Tour.”

THY WILL BE DONE

Thy Will Be Done are an American Heavy Metal Band hailing from Providence, RI. The band released their new 6-song EP entitled “Temple” on September 25th, 2012. Known for their DIY approach, the EP was produced and engineered by THY WILL BE DONE, mixed by acclaimed metal producer ZEUSS (Whitechapel, Suicide Silence, Soulfly) at Planet Z and is the inaugural release on the band’s own Eye.On Lion Recordings with INgrooves Fontana handling world-wide distribution. Eye.On Lion Recordings is a DIY-style record label designed to release new music, merchandise, as well as other media from the band. The first single, “You, The Apathy Divine”, was officially released through iTunes on June 26th following the band’s performance at the “Orion Music + More” Festival, for which they were hand-picked by the festival curators Metallica.

“Temple” is the band’s third release following 2009’s groundbreaking In Ancient of Days and the critically acclaimed 2007 debut, Was And Is To Come. The Temple EP shows the band expanding on their sound that both peers and press have already described as defying metal sub-genres. In addition to cracking the Top 10 on Billboard Heatseeker charts regionally at #9 and the whirlwind of positive accolades surrounding it’s unveiling; ‘Temple’ was voted Revolver Magazine’s ‘Album Of The Week’.

On deciding to pave their way and start their own label, the band’s vocalist and co-writer J Costa commented, “As a band, we’ve always wanted to preserve our expressions as well as the way they reach the listener. It’s important for us to have a fan feel, see, and hear the finished piece as closely to the creative source of energy as possible. Eye.On Lion is a way for us to offer our artistic creations to those who choose to support us and by proxy, excludes a lot of ‘middle-people’.” He added, “Growing up, I’ve always thought about having my own label and could identify with labels like Dischord that seemed to be doing things from a passionate perspective. I also found it inspiring seeing artists like Jack White and Mike Patton, amongst others, as well as bands like Neurosis, Tool and Clutch whom have decided to blaze their own trail in this ever-changing industry. Having worked with Jamey Jasta and his Stillborn label for our first two releases, I was inspired even more to want to maintain the DIY ethos I’ve always had and start this label.” Costa adds “Jamey’s belief in us got us started on this journey. Not only do we consider him Family, but also an inspiration to us.”

THY WILL BE DONE has toured extensively throughout Japan, Europe and the U.K. They have taken to the stage in North American for a plethora of performances including tours supporting the likes of Machine Head, Lamb of God, All That Remains, DevilDriver, Five Finger Death Punch, Hatebreed and Fear Factory just to name a few. Refreshed and invigorated with the release of their new EP, THY WILL BE DONE are ready for the next chapter. Tour dates and additional updates will be coming soon.

Metallic Hardcore from Northwest Indiana consisting of members from Blood In Blood Out, Blackwater, Choking on Reality, To Tha Pavement, & Shut the Fuck Up

WHUT? is an american Hardcore Punk & Thrash Metal hybrid hailing from Chicago, Illnoize. With intense energy, non stop blistering attacks and true DIY spirt, WHUT? destroys everything in it’s path. The new EP from WHUT?, Still Laughing, is due out in 2018.