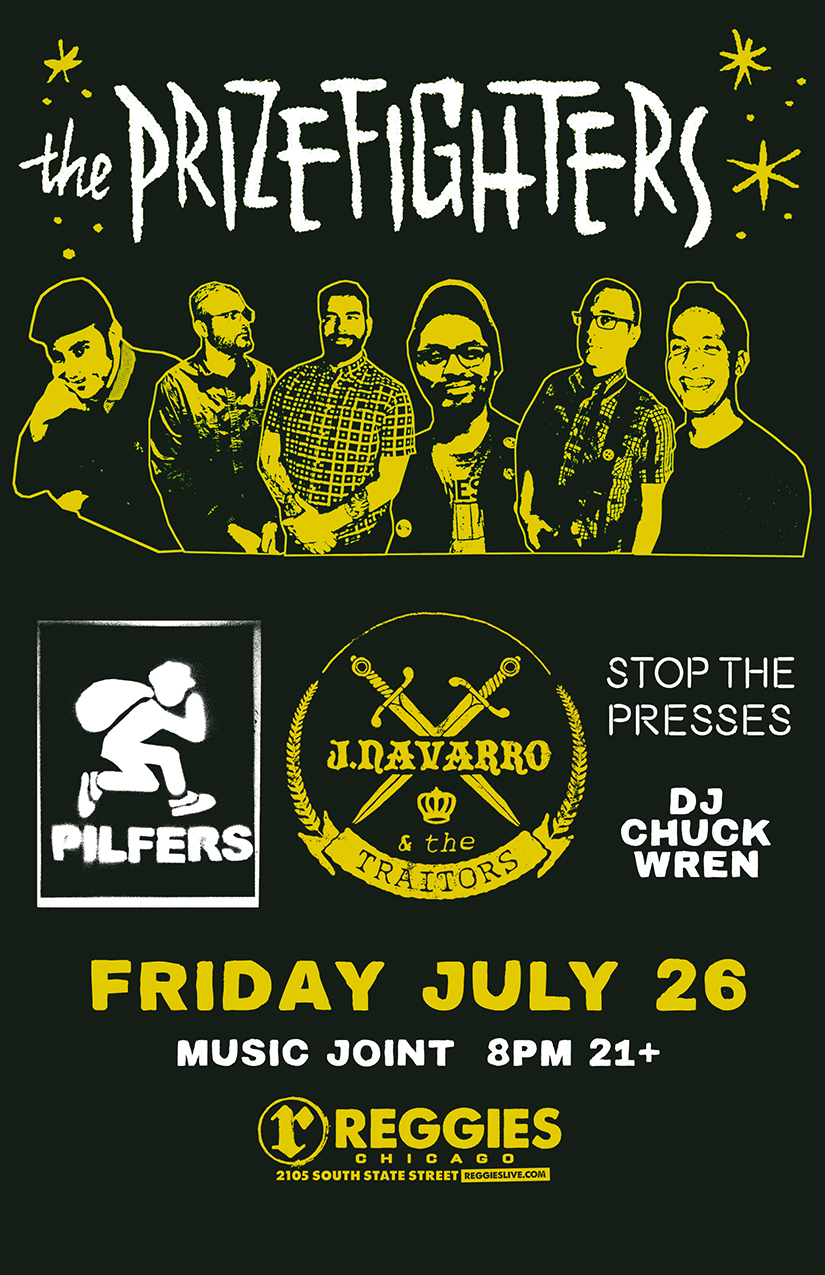 The Prizefighters have been have been at the heart of conserving the sounds of 1960s Jamaica since 2006. Born from a deep love of ska, rocksteady and early reggae, The Prizefighters aim to continue the short-lived legacy of these amazing genres, paying full respect to authenticity and style of the times. Over their decade plus of bringing the roughest and toughest sounds of Orange Street, they have worked as the backing bands for legendary performers Stranger Cole, Derrick Morgan, Roy & Yvonne, and Charlie Organaire, as well as sharing the stage with acts such as the Skatalites, Toots and the Maytals, Lee Perry, Hepcat, the Slackers, and many more.

Formed in 1997, Pilfers has toured internationally with the likes of Bad Brains, Zebrahead, Reel Big Fish, the Specials, Madness, the Mighty Mighty Bosstones, Amazing Royal Crowns, Mustard Plug, and Goldfinger. Pilfers released two albums including a self-titled full-length and Chawalaleng (Mojo Records). In the summer of 2001, the band broke up over various differences. Since 2005, the original line up has come together for several sold out reunion shows along the East Coast for their devoted fans.

In 2013, Pilfers hit the road with Reel Big Fish making new fans across the U.S. and Canada. The strong demand for more from their Pilfers Crew and their love for playing intense live shows has them hitting the road more frequently. Pilfers are currently recording new songs for an upcoming full-length album. Stay tuned for big t’ings to come!

J. Navarro & the Traitors began as a conversation between Jay Navarro (The Suicide Machines, Break Anchor, Hellmouth) and Eric Abbey (1592) about music that they had always played and never played together. From sharing the stage together in the early 1990s and 2000s they wanted to write and play music that they loved. So they took the idea and started writing, focusing on the reggae and Two-Tone sound that had been missing from the Detroit scene. With four songs written they needed a band. Together they ran down the list of musicians they knew and found the best ones for the job. Ken Haas (Polka Floyd, Reverend Guitars), joined on lead guitar, Scott Vesey (Trace the Veins) joined up on bass, and Jason Millbauer (Bad Assets) joined in on drums. Together they created the type of music that Navarro and Abbey heard in their heads and the band was born. A collection of songs that showcases the feeling of Detroit and the struggles going on throughout the world are showcased on their debut release. Come out to a show and dance all night. Cheers!

Stop the Presses is ska/reggae with a retro-pop and new-wave persuasion from Brooklyn, NY.