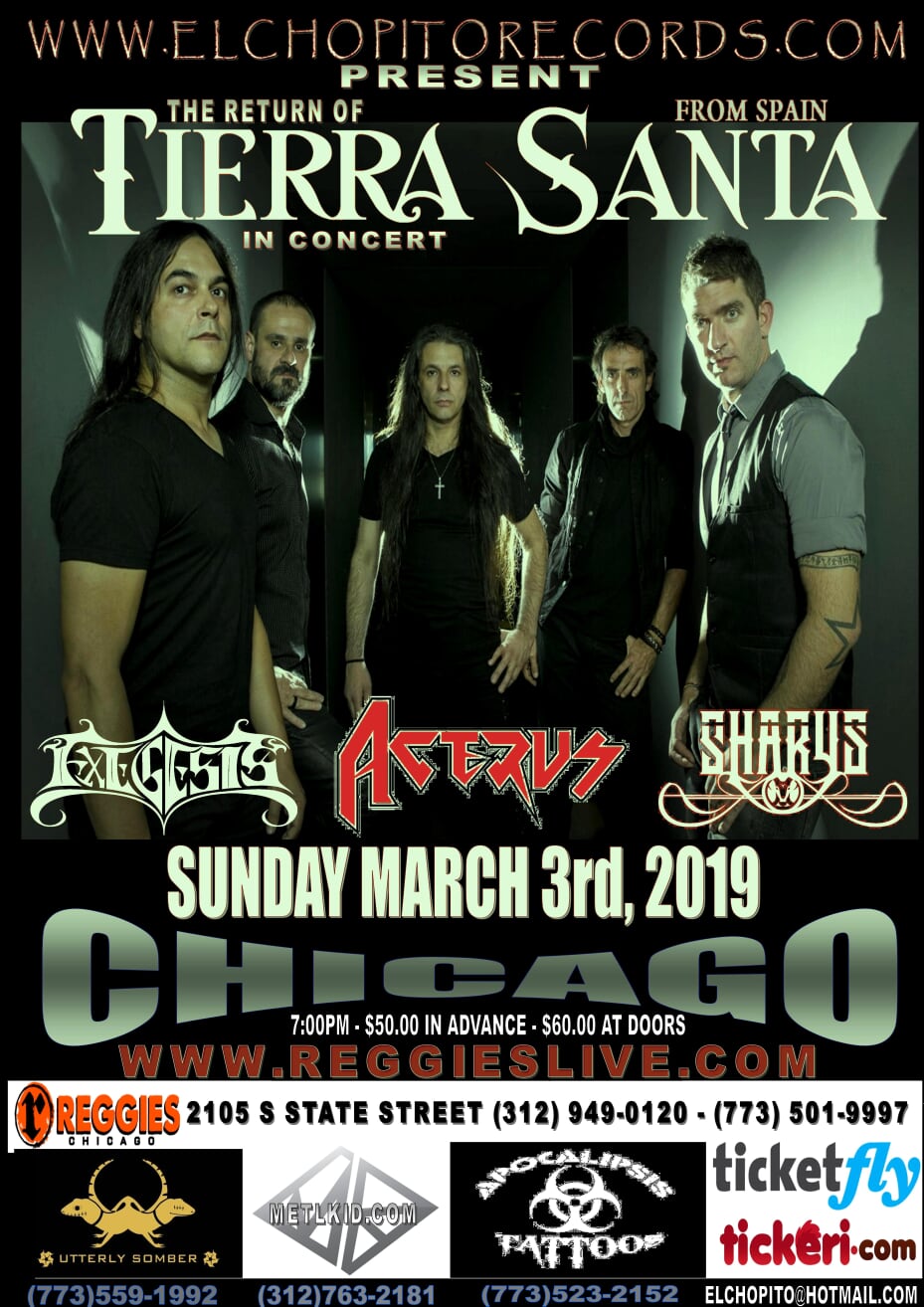 ‘Quinto Elemento’ is the newest recording of Tierra Santa, an anticipated album composited with ten songs signed by Ángel San Juan who certifies the magnificent state of form for this great band. A spectacular piece of work whose graphic art anticipates it’s musical content without deception and whose main value is the search for new horizons without moving away from the road already traveled, reaffirming its firm and deep roots.This record is the eleventh launch of the Rioja combo studio, it has been recorded and mixed in thestudios Sonido XXI by Javier San Martín and later mastered in Crossfade Mastering by Enrique Soriano. The production has been in charge of the one and only Angel San Juan next to Javier San Martin. All under the protection ofMaldito Records and its recruitment office Wilma Productions.A new installment ofTierra Santathat contains everything we’ve been waiting for: From the genuine and powerful epic we find in pieces like’Cain’ and ‘Moby Dick’ to the harsh sincerity of ‘Hombres sin Tierra’, ‘Lodo’, ‘Revolución’ y ‘De la Calle al Cielo’. All this under the personality of its unmistakable sound, solid and temperate, which manifests itself shamelessly in topics such as ‘Entre el Bien y el Mal’, ‘Fuego en el Paraíso’, ‘Donde Moran los Malditos’ y la homónima ‘Quinto Elemento’.A sincere exercise of great taste that will delight it’s followers and catch all those hungry for good music, regardless of their gender. In addition, in the gestation of ‘Quinto Elemento’ have had the special collaboration of the musiciansEduardo Zamora(former member of the Tierra Santa, guitars in ‘Quinto Elemento’, ‘Donde Moran los Malditos’ y ‘Fuego en el Paraíso’),Juan Zagalaz (guitars and arrangements in ‘De la Calle al Cielo’) and Dámaso Escauriaza (percussions in ‘Hombres sin Tierra’). A virtuoso trio that adds a dose of excellence to this new recording, whose result could not have been more satisfactory.’Quinto Elemento’ is the new card of presentation of a band consecrated with more than twenty years of trajectory, that does not give up and that continues evolving faithfully to a philosophy based on hard work, offering to themselves and strangers the best of themselves without losing an ounce of their identity.Tierra Santa, genuine rock.

Exegesis is a Colombian metal band based in Chicago IL founded in 2003 and led by the Garzon brothers Juan Carlos Garzón and Andres Garzón. The sound of Exegesis is characterized by the influence of Heavy metal, Death metal, Progressive Rock and Latin American sounds.
The performance is supported by visual effects,make-up, theatrical costumes and special sets that create and represent the graphic concept of the band with different symbols.
The band has 4 studio productions:
2007: Tears of blood
2009: Artificial Spirit
2017: Insurrection
2018: AMEN
Current Members:
Andres Garzón (Guitar and Back Vocals)
Juan Garzón (Bass and Lead Vocal)
Nik Simmons (Drums)

We are a 5 piece metal band from Little Village Chicago. Music we play is music we love.