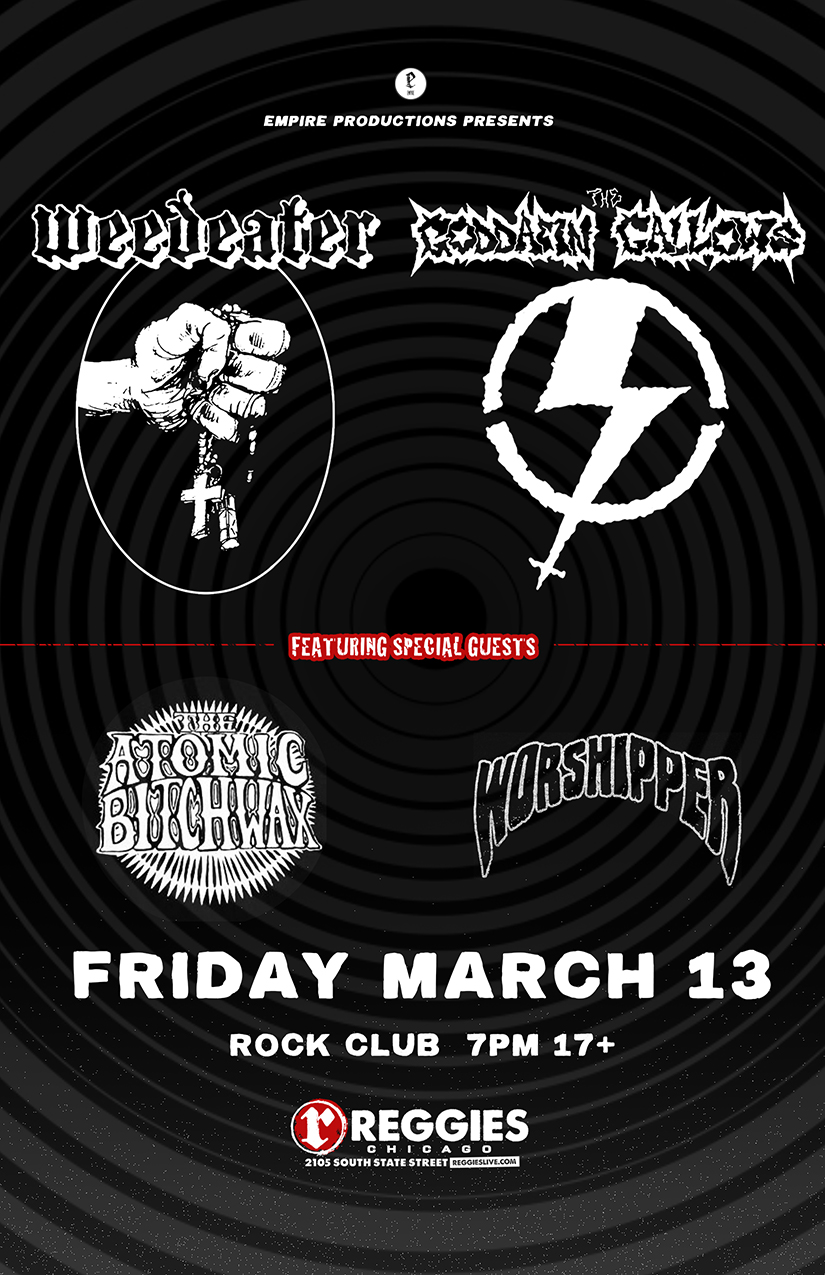 With a sound and presence like no other band in the world, Weedeater stand apart from all others, both live and on their recordings. Their unfiltered and unrefined energy surges uncontrollably through the band and anyone who bears witness to their live show. Spite and deep resentment somehow fuse with comedy and maximum volume to produce an indignant, vomitous (both figuratively and sometimes literally) performance that is forced upon the willing yet hapless crowd. You are instantly swallowed whole by both Dixie and Shep’s nearly indistinguishable monster bass and guitar tones, and you are absolutely beaten to a bloody pulp and scared for your life by Keko’s crazed, yet amazingly potent bashing of his kit; with sticks that look like tree trunks turning into a splintered mess by the end of every song. If you had any sense you might actually take a step back and contemplate your safety for a moment, but then you come to your senses (sort of, anyway) and realize you’re at a f*cking Weedeater show, and this is why you came here, and there is no way to deny what you are witnessing. Pure, unabashed, musical violence in every form. It’s real, and it’s dangerous, and it feels so damn good. After 2007’s critically acclaimed and now classic release, “God Luck and Good Speed” had been toured to death around the world, the boys finally took some time between the mishaps and mayhem of 2010 to write and record their 2nd album for Southern Lord Recordings and 4th full-length CD/LP, “Jason…The Dragon”, which will be released March 15th on both CD and LP. Recorded and mixed once again by the legendary Steve Albini at Electrical Audio Studios in Chicago, and mastered once again by the equally as legendary John Golden at Golden Studios in southern California, “Jason…” continues the legacy that has culminated over nearly 15 years of the band’s existence into something truly unique and masterful. Once again, we are dragged through the mire by three of the finest dirge merchants in the world, and the songwriting is just as ingenious as ever and seems to start just where “God Luck…” left off, with “Hammerhandle” kicking things off in an oscillating groove that builds and falls and then eventually melts into “Mancoon”, a ripping tune that spans themes from homemade dynamite to true tales of human bite wounds and other guttural warnings that are surely not meant to be taken lightly. The band returns to their swampy roots via acoustic bass and banjo with the album’s closer “Whiskey Creek”, and they venture into totally new territory with the hook-laden, driving force that is “Homecoming”. Dixie’s solo performance on “Palms and Opium” sounds like a narcotic jam that he and Dean Ween had at a private nitrous party on a deserted island; the track was inspired by and written during the blissed-out visions Dixie had while laid up on pain pills for a month after blowing off his big toe with a shotgun in early 2010. We don’t need to go back there again, do we? Seems like we just did. The masterpiece is of course the album’s namesake, “Jason…the Dragon” which takes the listening doomernaut on a slithering journey though a sludgy world of viscous, black molasses riffs that are punctuated by cannon drums and some of the album’s most memorable lyrics. With a full headlining tour of the US planned for February and March and a European tour shortly thereafter with a stop at Roadburn and more dates to be announced soon, the band is rearing to take 2011 by storm and there is a horde of rabid fans ready to hear their newest offerings.

The Goddamn Gallows formed in 2004 by founding members and Lansing/Detroit natives Mikey Classic on guitar and vocals, Fishgutzzz on upright bass, and Amanda Kill on drums -replaced by current drummer Uriah Baker (aka; “Baby Genius”) in 2006. The trio started out migrating around the West for a time, holing up in Hollywood squats and squalid apartments, before releasing several albums: The Gallows EP (2004), Life of Sin (2005), and Gutterbilly Blues (2007), and finally hitting the road nearly full-time to establish their presence in the psychobilly-country scene while honing their self-described “twanged-out punk rock gutterbilly”. In 2009 the addition of Avery, a fire-breathing, accordion and washboard player, as well as Jayke Orvis (formerly of the .357 String Band) on mandolin and banjo, prompted The Goddamn Gallows to explore many new directions with their songwriting and in their live performances. As evidenced on their most recent 2009 album, Ghost of The Rails, and as witnessed by their spectacular and tireless live shows, The Goddamn Gallows began to forge a path founded on their very own brand of contagious primeval abandon: an unpretentious and from-the-gut carnivalesque smorgasbord of parts old time revival, circus sideshow, and good old-fashioned rock and roll. The result falls dead center into a head on collision between something like a Western honky-tonk impromptu parking lot rodeo, and Suburbia (the 1983 Penelope Spheeris cult classic film, not the location).

The Atomic Bitchwax is an American rock band from Long Branch N.J. formed in 1993 by bassist/vocalist Chris Kosnik, guitarist Ed Mundell and drummer Keith Ackerman. Their music is a combination of 60s psychedelic rock, and 70s riff rock filtered though the progressive rock influences of today.

Around this time Chris started the side band “Black Nasa” releasing two fulll length records also on Teepee and Meteor City. Black Nasa “S/T” 2003 and “Deuce” in 2004. Similar in sound but with more focus on vocals and traditional song structure.

The Atomic Bitchwax was in a state of flux for about a year or two, By now, the very established Monster Magnet was touring and recording extensively leaving little time for T.A.B. to write a proper follow up record. This inevitably ends Eds tenure with the group in late 2004.

2005 -Enter guitarist/vocalist Finn Ryan formerly of “Atlantic” recording artist “Core”. Now with Finn on board the band focuses on writing and touring for about a year before entering Trax East Studios in South River N.J. to record their follow up, the aptly titled “TAB 3”. The 2005 release is followed by two European and North American tours with a stop in Seattle Washington’s “Sound House” to record the 2006 EP “Boxriff”, engineered by Jack Endino which also included a DVD live show filmed in Seattle’s Sunset Tavern.

2006- Unknown and personal reasons sees drummer Keith Ackerman leaving the band at the end of 2006.

2007-In an odd twist of fate, current Monster Magnet drummer Bob Pantella joins T.A.B. and more touring follows throughout the year ending with the recording and release of the 2008 “TAB 4” on Teepee and Meteor City.

The current lineups latest work includes the 2011 release of “The Local Fuzz” boasting one 42 minute track of over 50 riffs back to back. 2012 and 2013 brings the bands road show to Australia, New Zealand, England, Germany, France, Luxembourg, Belgium, Holland, Italy, Switzerland, Austria and North America.Their music has also appeared in popular TV shows including “Jackass”, “Home Wrecker” and “Fox Sports”.

2014- The band is currently finishing their latest record “working title TAB 5” and will be touring Europe late summer 2014.

Chris and Bob will also be touring with Monster Magnet from late 2013 through summer 2014 in support of their latest record “Last Patrol”.

Creeping up from the North, Boston’s WORSHIPPER is a dark new voice in heavy music. Drawing comparisons to such luminaries as Dio-era Black Sabbath, UFO, and classic-era Scorpions, WORSHIPPER create something new and epic from the echoes of the past. Through their unique mix of contemporary and classic influences, WORSHIPPER prove that the soul of melodic heavy music still burns brightly.