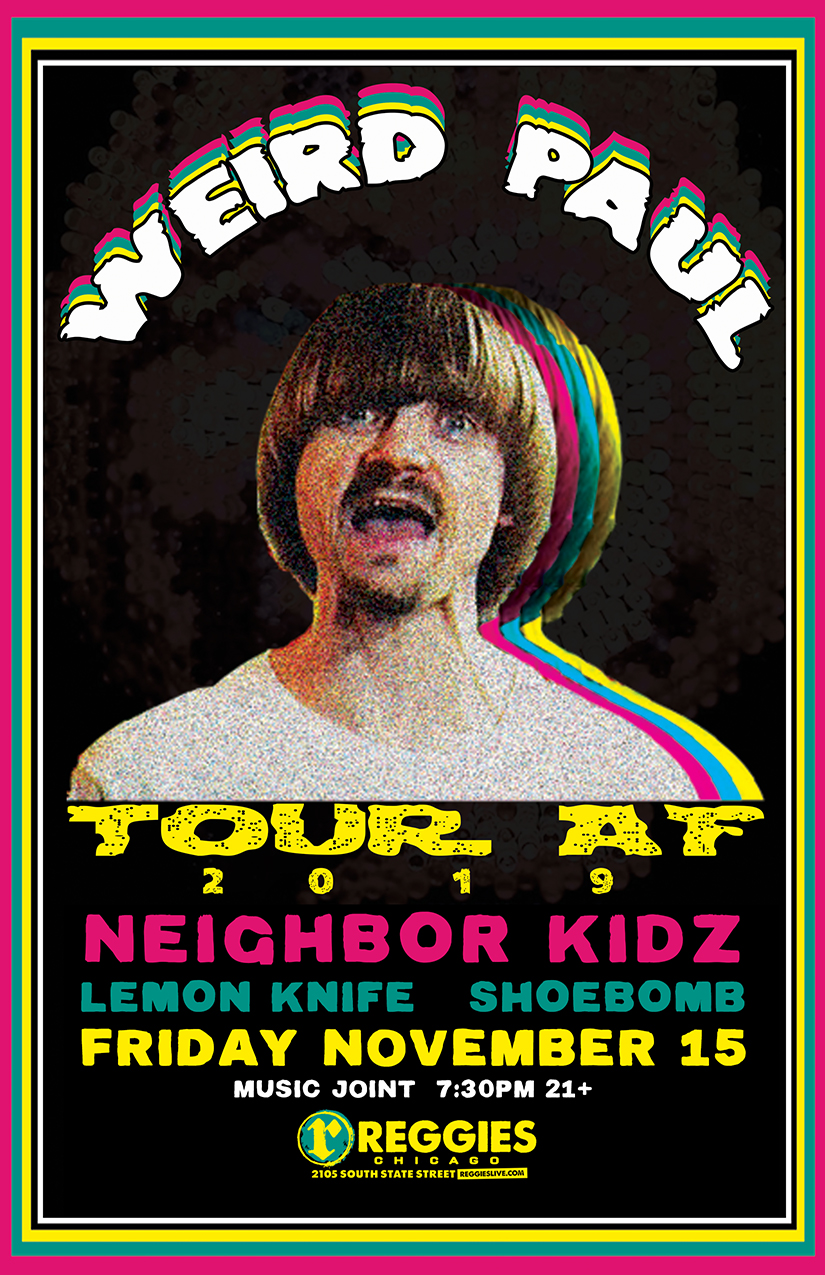 Weird Paul Petroskey is one good lookin’ S.O.B. But, more importantly, he writes the damn catchiest songs. Paul began releasing his own cassettes in the late 80’s. In 1991, Homestead Records released “Lo Fidelity, Hi Anxiety”, Paul’s cult classic CD. Since then, Paul has released many more albums of fun indie-pop, including his latest (and 33rd), LIT AF!

Just some friendly neighbor kids, playing silly tunes.
Imagine The Moldy Peaches and The B-52s listening to the Shaggs ?

Lemon Knife is a Chicago-based hard rock duo pulling from classic rock, punk, garage rock, and anything built on riffs to create a melodic and eclectic sound that is remarkably big for being put out by two people. Formed by kindred nerds Mia Blixt-Shehan (bass, melodic vocals, occasional guitar, musical composition) and John Retterer-Moore (drums, shout vocals, lyrics) in the spring of 2017, they have since played an especially varied assortment of Chicago venues, including Burlington Bar, Reggie’s, Red Line Tap/Heartland Café, several memorable DIY spots, and a few notable non-traditional gigs at events such as YesFest 2018 in Elmhurst and Chicago’s Global Reddit Meetup Day. Tracks from their debut album, Songs About Water and Death, have also received considerable radio play by stations such as WKQX’s Demo 312, WIIT, and WRSE. They released a history– based conceptual EP, In Our Darkest Sour, in October 2018.

They are just four guys who like to hug each other and play music. If you want to listen to a band while skateboarding, walking to a store, waiting for a train, going on a road trip, sneaking out at night, moshing, or simply just to sing along, this is the band. They write songs about ANYTHING. They barely take themselves seriously.

In the end, they have no idea where they are going with Shoebomb, but they do know where they have been. And as long as there are stupid-nonsense-sense bands out there, Shoebomb will give hope and light to those dark souls whose ears have been poisoned by today’s music. Shoebomb is love, Shoebomb is life.