Did you miss your opportunity to see some free punk bands at Record Breakers last weekend? Bummer, we feel bad for you. The show started at 4PM after Ultrahazard set up and went through a sound-check. Blue-haired Saffron and Violet up front powered through a set of punk rock and ska with Eli and Nick keeping the rhythm in the back on bass and drums. Record Breakers began to fill up – at least twenty people were spread between the aisles of records, some perusing the wares.

The kitchen downstairs prepared free hot-dogs and soda for bands and the audience, but about halfway through the show, we realized half the people there were vegans. Lame to give them free food they can’t even eat, so someone headed downstairs to pick up a tray of hummus and chips for the non-meat-eaters in the store.

Next up, Ultra Nada dragged their amps onto the rug behind the counter that served as the stage. The drummer set up his snare and cymbals – the joint downstairs let the bands use its kit for the show. Isaac and Alfred switched mics during sound-check before starting their set. Isaac, bassist and vocalist, growled into the mic with a sound that was both the energy of ‘70s New York and the fury of DC hardcore with Gene interjecting guitar solos in between. With one more song to go, they finish the set and threw in a quick 55-second Misfits cover before walking off.

Then Madison, WI band Skizzwhores (Ultrawhores for this show only, to fit the vibes) takes the stage. The band just recently had all their gear stolen while on tour in New York, and Ash, singer and guitarist, showed off their new guitar donated by a friend, Evan borrowed Eli’s bass from Ultrahazard and Dave got behind the Music Joint’s drum kit. The band launched into their set with the dynamic alt-rock (or is it punk?) energy they brought with them on tour – despite losing all their gear and most of their merch, they still find a way to play shows.

Bummed you missed the bands? No worries, we’re hosting another in-store show next month on November 14th. Come see two rad metal bands FOR FREE! Texas Toast Chainsaw Massacre and “Richardson” Richardson are playing. There will be free hot-dogs,soda, and definitely something for the vegans out there. Thanks to Jason Magicks for setting up the PA system before the show and to Azalee and Julian for setting up the bands during their sound-checks. 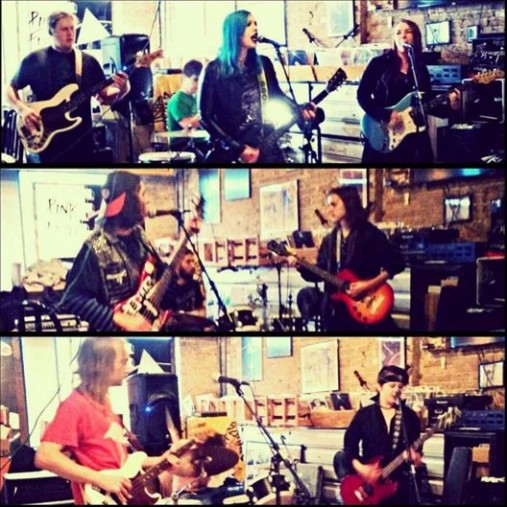