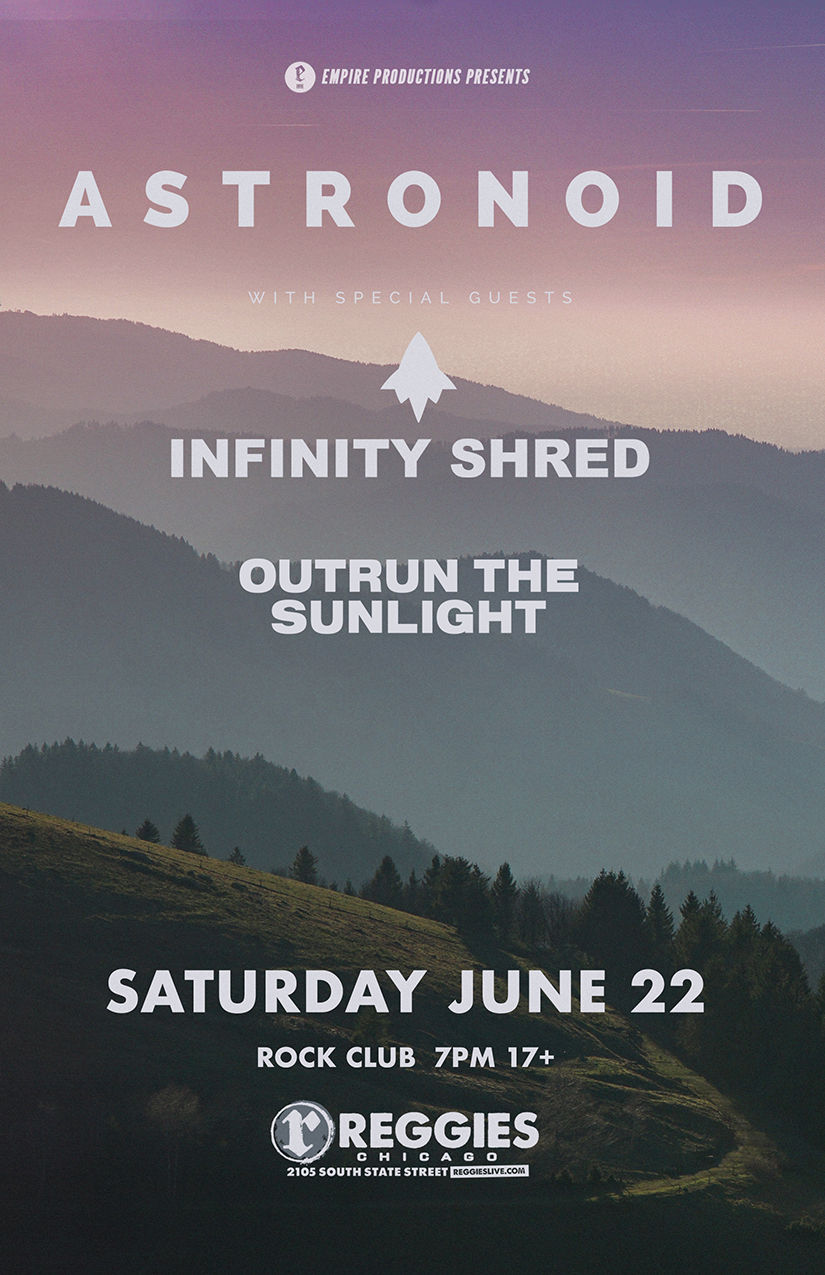 Astronoid is a five-piece band from Boston, MA with influences ranging from Devin Townsend and Mew to Alcest and Cynic. Their first full length album, being released by Blood Music in 2016, is part of an evolving experience that complements their two acclaimed EP’s from 2012-13, “Stargazer” and “November”. The driving rhythms, subtle time signatures and soaring vocal harmonies combine to create an auditory cloud to lift you into the ether. There’s always something new to discover hidden within the dense layers of thrashy guitar riffs and euphoric vocals. Lyrically, the record conveys a disillusioned and hopeful view of the world as a whole.

Outrun the Sunlight is an instrumental metal band from Chicago, IL, who draws diverse influence from modern metal to post-rock, from groups such as The Contortionist, Cloudkicker, Caspian and Russian Circles. Formed as a studio project in 2011 by guitarists Austin Peters and Cody McCarty, the band released both “Architecture of the Cosmos EP” and “The Return of Inertia” in the same year. Signing with Rogue Records America in 2012, the duo re-released “The Return of Inertia (Vocalist Version)” which included vocalists from around the world, plus two bonus tracks. In 2014, the addition of drummer, Pedro Villegas, and bassist, Connor Grant, brought the band to the stage, and they released their second album “Terrapin,” also on Rogue Records. Adrian Perez joined as keyboardist, who was in the band shortly, performing on “Live at Electrical Audio EP” and the “Stars in the Ocean” music video, both recorded in 2015. In August 2015, the group toured in the east coast United States with Native Construct (Metal Blade Records) and Wings Denied. In 2016, after the departure of Perez, the band parted ways with Rogue Records, and went on to perform on Chicago internet music series, Audiotree, releasing the live album “Outrun the Sunlight on Audiotree Live.” The band returned to that same studio to record their third release, “Red Bird,” which was the first instance that the group performed together on an album, released independently in 2017. In April 2018, the group performed their last show with Grant, and the position was filled by Phil Kalas. The group toured the southwest United States with Boston progressive metal band, Aviations, in June 2018, and is now currently at work on their fourth full-length album.