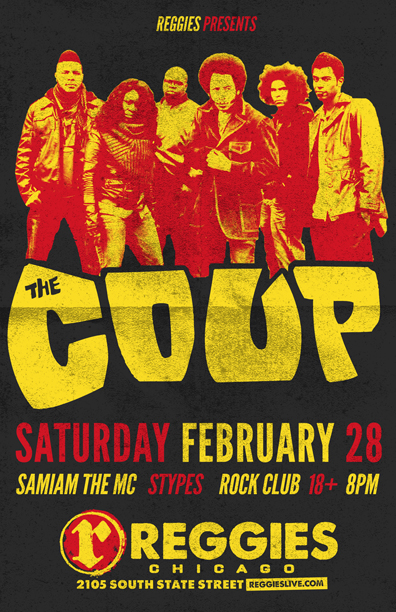 The Coup is a political hip hop group based in Oakland, California. It formed as a three-member group in 1990 with emcees Raymond “Boots” Riley and E-Roc along with DJ Pam the Funkstress. E-Roc left on amicable terms after the group’s second album but appears on the track “Breathing Apparatus” on The Coup’s third album, Steal This Album. With the release of that album in 1998, The Coup began incorporating the live instrumentation from their recordings into their live show. The Coup has, since that time, been a full band.

Stypes create a vibrational energy that is not comparable to most hip hop music that is produced today. With the contrasting vocal styles of StereoAdam and StereoAaron matched with a bedrock of sound so gorgeously presented by WaxBuzzard, Incise, George Fields, Teddy Roxpin and so many others. What Stypes offer to the spectrum of sound is greatly needed and they are here to give it

OBY is a big band collective formed in the halls of Columbia College Chicago on February of 2014. Since then, OBY has built a very strong and loyal fan base through their non-traditional style of music and extraordinary live performances. Their genre and style of music falls under what they like to call “Big Band, Hip-Hop” which consists of jazz, gospel, funk, and hip hop influences.