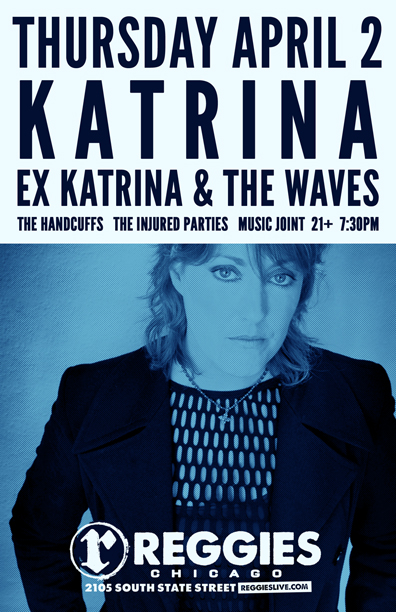 Former lead singer from the Grammy nominated band, Katrina and The Waves, was born in Topeka, Kansas, U.S.A, and grew up with the West Coast sound (Fleetwood Mac, Linda Ronstadt, Emmylou Harris, Heart). Katrina’s father was a Colonel in the USAF who was stationed in California, New Mexico, Florida, Georgia, Massachusetts, Nebraska and Alabama and so Katrina moved seven times while she lived in the U.S.A. and lived in Germany and Holland until, at the age of 16, Katrina arrived in England, where she met fellow American and future Wave, Vince de la Cruz.

As a singer, Katrina was inspired by Motown, Stax and American rock as well as girl groups such as The Shangri-Las and The Shirelles. In 1983 Katrina and Vince formed Katrina and The Waves with Englishmen Alex Cooper and Kimberley Rew.
Katrina and The Waves had their first big break in 1984 when The Bangles covered their song ‘Going Down To Liverpool’. This drew attention to the group and lead to an international deal with Capitol Records.

Katrina and The Waves appeared on Johnny Carson twice.

The band’s first album was produced by Scott Litt, who went on to produce REM and Nirvana – it was his idea to add the drum intro to ‘Walking on Sunshine’ which made it irresistible to radio DJs. The first Capitol album, ‘Katrina & The Waves’ released in 1985, was a substantial critical and commercial success and ‘Walking on Sunshine was a worldwide hit earning top ten spots around the globe. (No. 9 US, No.8 UK, No.3 Canada, No.4 Australia). Since then, the song has been broadcasted over 2,500,000 times in the U.S. and was the highest played track on radio in the Summer of 2008.

With rich three-part harmonies, chugging electric guitar, deft rhythms and Dean’s ‘songs and sardonica’ approach to composition, The Injured Parties’ music draws inspiration from the melody and verve of vintage Kinks, the squonk of Neil Young’s Crazy Horse, the blissful feedback of The Velvet Underground, the psychedelic twang of The Byrds, and the hard-edged pop of The Posies.

Commemorating their one year anniversary, The Injured Parties headed into the studio to record their debut album with engineer Jeff Hamand (Souled American, Tallulah, Diane Izzo), mixing in Nashville with producer Mark Nevers (Lambchop, The Clientele, Calexico, Bobby Bare Jr.). Fun with a Purpose was released in July 2009.

In 2013, the band contributed a track to Starry Eyed, a tribute album to UK powerpop band, The Records. They are currently recording their second full-length, to be released later this year. Stay tuned!”