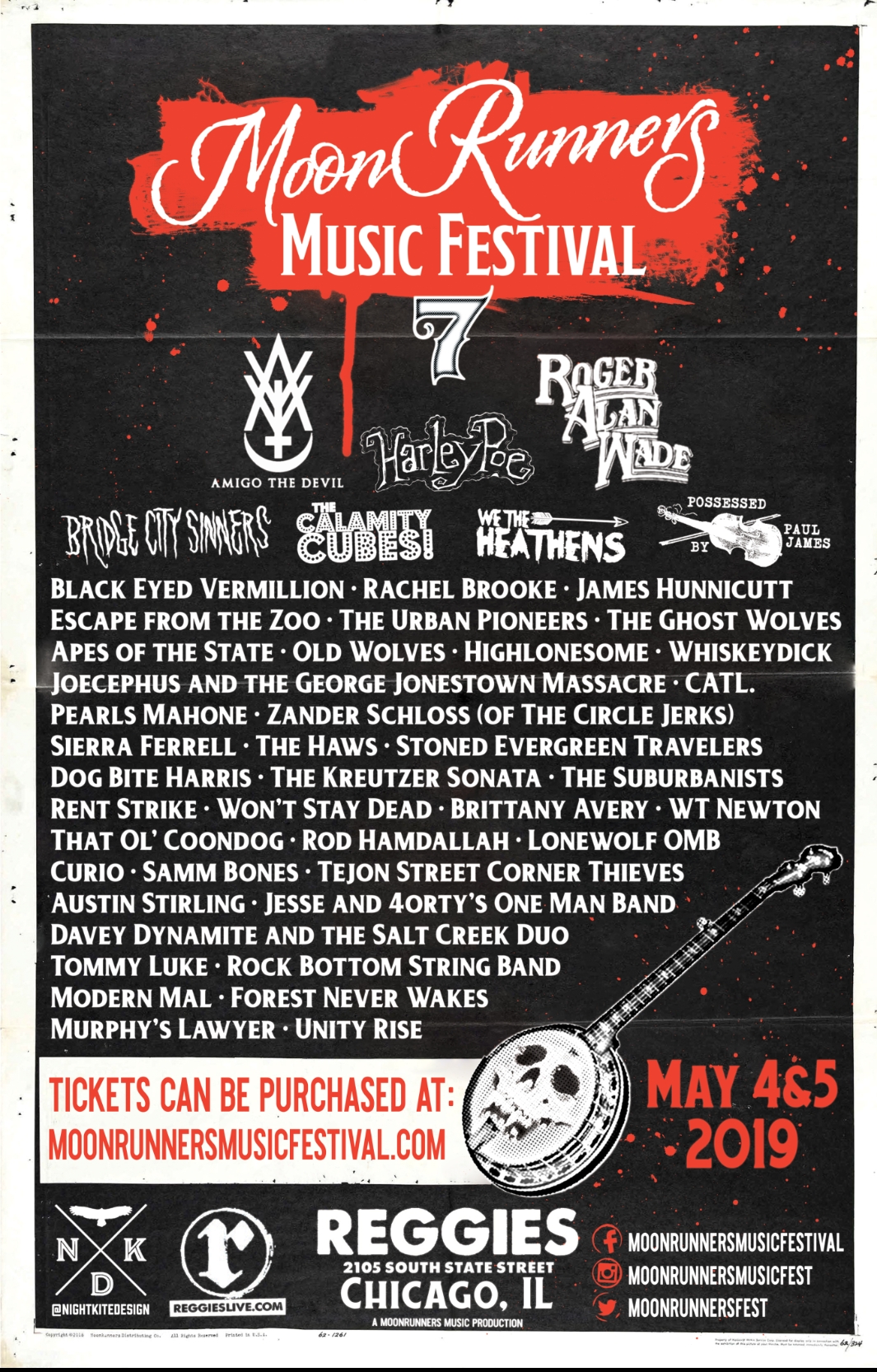 It’s not enough to say Harley Poe write songs about monsters. Harley Poe sing about being monsters. In the band’s world, the vampires, werewolves, serial killers, and cannibals take center stage and become the protagonists onto whom we project our joys, our fears, and our failings.

Fans of singer/songwriter and one man band Possessed By Paul James my be surprised to find out that playing music is not his only passion. Though he somehow finds the time to make appearances all over the US and Europe throughout the year, down in the Texas Hill Country he’s in charge of an elementary school special education classroom, teaching children with intellectual disabilities. And you may think that with juggling so many responsibilities between music and work that he wouldn’t have the energy or the time to excel at either one. But Possessed by Paul James is not your average musician, or teacher. – Saving Country Music

Roger Alan Wade has something to prove. Why would anyone who has penned songs for country music’s royalty such as Johnny Cash, Waylon Jennings, George Jones, Hank Williams Jr. and others have anything to prove? A bit of a history lesson may be in order here.

Once upon a time, Wade worked in Nashville writing songs for other folks to record. Hank Williams, Jr. took his song “Country State of Mind” to number one back in 1986 and garnered Wade three gold records and one platinum. When Nashville stopped making country music around the early ’90s, where was a guy like Roger to go? For years he played for next to nothing in honky-tonks and clubs entertaining anybody who would listen. Then in 2005, Wade’s All Likkered Up became the first release on the independent label Johnny Knoxville Records.
Consisting mainly of novelty songs with a satirical nod to rednecks and honky-tonk culture, All Likkered Up brought Wade to a global audience. The tracks “If You’re Gonna Be Dumb” and “BB Gun” were featured in the highly successful “Jackass” films/video game and MTV’s “Wildboyz” TV series. But there were a few songs on it like “Sweet Wine of Sorrow” or the heartfelt “Johnny Cash has Died” that showcased Wade’s ability to stretch out in a more serious direction.

In 2009, Wade released Stoned Traveler, another solid album with about a 50/50 balance of novelty songs and more traditional singer-songwriter material. Stoned Traveler included “D.R.U.N.K.” which appeared in the MTV show “Nitro Circus”.
Then in 2010 Wade released his masterpiece, Deguello Motel.
The inspiration for Deguello Motel may have been thirty years of hard living, but the approach was a sober one. The first challenge was for Roger Alan Wade to get sober. (He did.) The second challenge was to see if he could write a song that way.(He can.) But that wasn’t enough for Wade. He had something to prove. “He was good till he kicked the drinking and drugs” is how the cliche goes. Years of prejudice and misguided notions were waiting to be quashed. Wade quashed them, and then kept moving. He wasn’t satisfied proving the notions wrong, he wanted to prove that the opposite was right.

After hearing Deguello Motel Wade’s fans started asking, “Is this the same guy who wrote ‘Poontang’? Deguello Motel catches people looking the other way. You keep waiting for the next song to be the goofy one, and it never comes, adding gravity to the songs, making you perk up and pay attention saying, “This is serious stuff.”

All this talk of sobriety may have you thinking Wade lost his edge. On the contrary, Deguello Motel is like fighting fire with fire, and telling the hard, cold, ugly truth, with a poet’s wit and wisdom. The album is a catharsis, with the lyrics like toxins being purged out in all their candid rawness bringing Wade out of the shadow of being Johnny Knoxville’s cousin or a writer of silly songs, and into the company of people like Guy Clark and Townes Van Zandt as a premier songwriter.

In 2011 Wade reached back into his bag of novelty songs one more time and released Too Fat to Fly. Kicking off with the title track, which is based on the dispute between Southwest Airlines and film director Kevin Smith, Wade trades in the bleakness of Deguello Motel for more irreverent humor. More exposure came with “Party in My Pants,” which was featured in the film Jackass 3-D.
The best moment of this brief album comes at the end with the masterful tune “The Sun Don’t Shine on the Same Dog’s Ass Everyday,” which, if you believe the story, was pitched to Cash, Waylon, Willie, Bob Dylan, Neil Diamond, and others, all in the hopes of Wade being able to afford a box of jelly-filled donuts for his cousin Knoxville’s birthday!

In December 2011, Wade launched his Official Facebook Fan Page www.facebook.com/RogerAlanWadeMusic with a special gift for his fans. When friend, fan and Jackass Star Ryan Dunn tragically died in an accident earlier in the year, Wade wrote the hauntingly beautiful tribute “The Light Outshines the Star”. Wade gave the song away for free too his Facebook fans as a gift from Dunn and “all the Jackasses that love him”. The response has been overwhelming.

2012 is gearing up to be a big year for Wade. The next CD titled “The Last Request of Elijah Rose” is a prequel to Deguello Motel. Roger states, “This album is more about foreboding than darkness.  You will feel the storm coming.  It’s about the journey in, when you’re young and everything seems like it’s going to go as you planned.  And then, man, it just don’t sing your song no more for some reason.  You hit a time when it tests your mettle.  You either come out on the other side or you don’t.  What’s tantalizing is that I can hear it, I can feel the weather change and I can feel all the characters involved in it.”

Whether he’s writing the dark and poetic tunes of Deguello Motel or “Psycho Bitch from Hell,” Roger Alan Wade is “an American treasure and one of the greatest songwriters we have.”

Austin, TX based duo The Ghost Wolves met in 2011 backstage at a local music festival and have been an inseparable force ever since. To Carley & Jonny rock n’ roll is an intangible spirit — an expression of absolute creative freedom, not a binding genre. Their stage show is wild, energetic and infectious. Bombastic guitar riffs, wild lyrical tales, explosive sing-alongs, scratchy acoustic cuts and slow-burning muddy grooves are delivered with glee. The songs stick in your head like a recurring dream.

Liz Sloan was born in Abilene, TX and grew up in a small west Texas town called Breckenridge. When she was three years old her mother entered her into violin training. Her first violin was a Cracker Jack Box with a ruler taped to it. She was home schooled for most of her childhood so she could focus on playing violin. She eventually got fed up with the classical world and looked for a change in the world of country and bluegrass. She joined began touring with Bob Wayne and the Outlaw Carnies in 2009 where she met Jared.

Jared was born in Pensacola and grew up in Chattanooga, TN. He grew up playing in local punk bands that never made it out of the basement. He joined the Navy in 2001 and after his time in the Navy he wanted to play music again so he bought an upright bass and taught himself how to play. He played in a lot of New England rockabilly and psychobilly bands as well as partially fronting his own band, Soul Reapin’ 3. In 2009 he decided to ‘make a go at the music thing’ and left everything behind to tour with the Hillbilly Hellcats in Europe for a month. The day he came back he got a phone call from Bob Wayne saying that he needed a bass player. That evening Jared hit the road from Connecticut and met the Carnies in Austin, TX.

Liz and Jared hit it off immediately and since then have toured and recorded with countless bands in the roots community. The Urban Pioneers are Liz and Jared’s new project where they set out to conquer the blacktop sea playing their brand of old time music that is guaranteed to get you stomping your feet!

Austin Stirling is a singer and a songwriter with various sounds up his sleeve. Austin is formerly known from touring over the last several years as “The Hangdog Hearts”. Changing direction to embrace variety of what he feels he is capable of doing and branch out. Austin’s venture is to encompass his love of blues, blue grass, old country, and roots music. You will see revolving members in each of his projects where he is the heart and constant core piece. His mesmeric vocals, banjo and guitar can be heard throughout all of his records. In his latest project you will hear an eclectic blend of all the styles where he has written, played and recorded each individual part. Austin works and plays live with a slew of brilliant musicians to bring to life the music he has pumping through his veins.

Curio is a hell-raisin’ and soul-shakin’ rock n’ roll band from Chicago, IL. Their music is steeped in southern gothic lore by way of the Midwest. Heavily influenced by the growl of Chicago blues, the low-down and dirty swamp rock of Louisiana and the twang of Tennessee country, Curio conjures a sound that has as many influences as there are miles on I-55 from The Windy City to The Big Easy. Chris Pluska and his band of wayward gamblers have been playing to crowds at juke joints, dives and clubs since 2009. Curio’s live show has the fervent energy of a backwoods revival and the no-holds-barred attitude of a bar brawl. Their records are love letters to the bastards, brawlers, vagabonds, and believers who’ve shaped American folklore for better or for worse. Curio’s tales have been described as ‘Midwest murder ballads’ that depict the timeless narrative of wrong-doing and temptation. Among their supporters from coast to coast can be counted Paducah, Kentucky’s own J.D. Wilkes of Legendary Shack Shakers/Dirt Daubers fame who worked with the band on 2014’s “Twisted Roots” album.

Chicago has historically been home to some of the most notorious cheats as well as tough-as-nails workin’ folk and Curio walks the line between the rogue waltz of Prohibition-era bootleggers and the brute tenacity of the old Union Stock Yards butchers. Like their name implies, Curio is a collection of oddities whose sound has been weathered over the years.

Born to sing and bound to roam, Pearls Mahone is part hard luck crooner and part gospel firebrand. With a firm foundation in traditional church music, she truly sings with spirit. From deep roots she built her repertoire from an early age into a seamless marriage of Soul, Rock & Roll, Rockabilly, Country and Bluegrass.

40RTY AND JESSE’S ONE MAN BAND

40RTY, (pronounced, ˈfɔrti ) is a barefoot, beer soaked, outlaw folk punk singer based in Louisville, Kentucky. Combining traditional American clawhammer banjo with the defiance, abrasiveness and high-energy of modern punk rock, 40RTY takes no prisoners, as he holds audiences captive with his often paradoxical, yet deeply personal lyrics and intense banjo riffs. If music is the canvas on which a musician paints a picture, 40RTY’s music is a cracked mirror, where he shares his own reflections and stories from a life of struggle that has known: love, war, pain and friendship, all from under the boot of working class mediocrity.