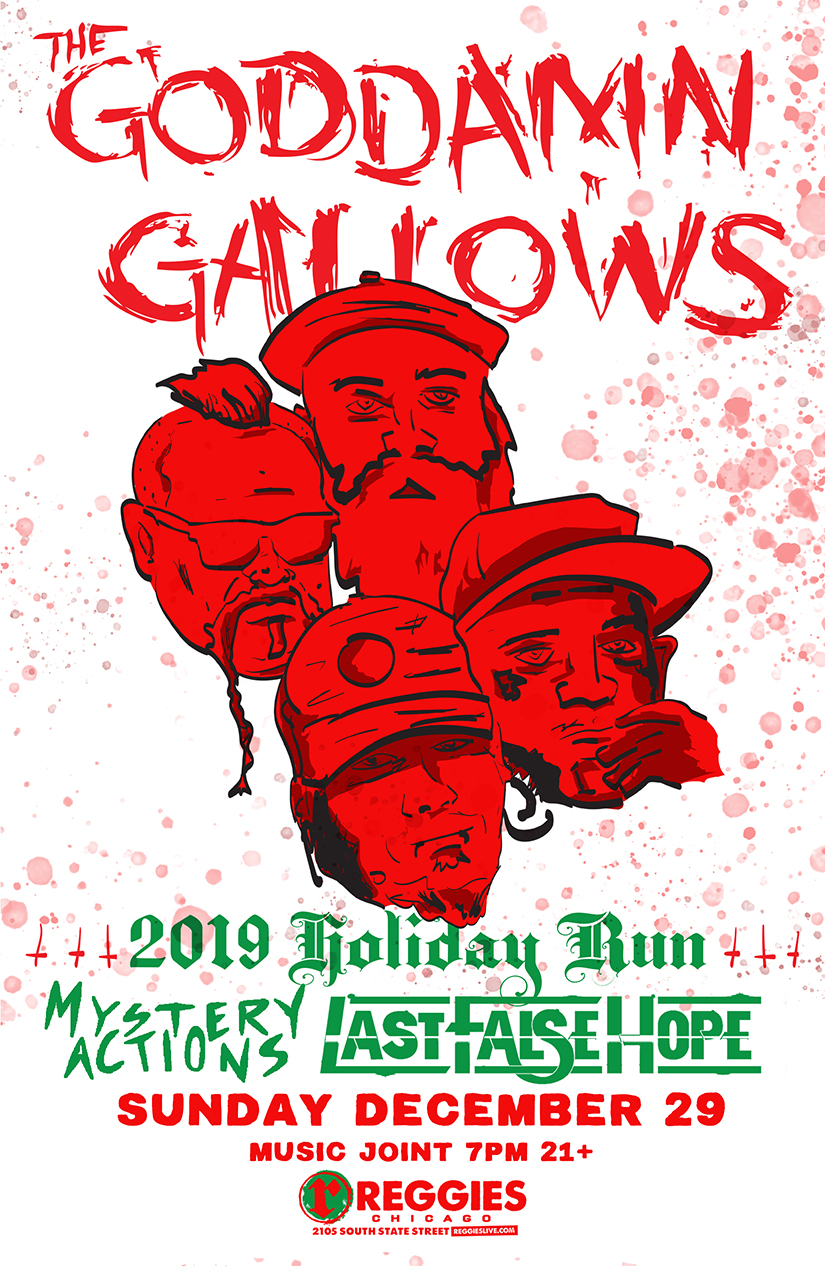 The Goddamn Gallows formed in 2004 by founding members and Lansing/Detroit natives Mikey Classic on guitar and vocals, Fishgutzzz on upright bass, and Amanda Kill on drums -replaced by current drummer Uriah Baker (aka; “Baby Genius”) in 2006. The trio started out migrating around the West for a time, holing up in Hollywood squats and squalid apartments, before releasing several albums: The Gallows EP (2004), Life of Sin (2005), and Gutterbilly Blues (2007), and finally hitting the road nearly full-time to establish their presence in the psychobilly-country scene while honing their self-described “twanged-out punk rock gutterbilly”. In 2009 the addition of Avery, a fire-breathing, accordion and washboard player, as well as Jayke Orvis (formerly of the .357 String Band) on mandolin and banjo, prompted The Goddamn Gallows to explore many new directions with their songwriting and in their live performances. As evidenced on their most recent 2009 album, Ghost of The Rails, and as witnessed by their spectacular and tireless live shows, The Goddamn Gallows began to forge a path founded on their very own brand of contagious primeval abandon: an unpretentious and from-the-gut carnivalesque smorgasbord of parts old time revival, circus sideshow, and good old-fashioned rock and roll. The result falls dead center into a head on collision between something like a Western honky-tonk impromptu parking lot rodeo, and Suburbia (the 1983 Penelope Spheeris cult classic film, not the location).

From the city by the lake comes Chicago’s own Mystery Actions. An all-female lineup delivering punk rock ‘n’ roll music with everything they’ve got and more. Capturing the feel of 70’s punk rock and modernizing the Runaways, these ladies are bound to grab your attention with the first note. Inspired through a broad range of influences covering the Avengers to the Damned these gals are ready to rock.

They have shared the stage with Cock Sparrer, the Buzzcocks, Lower Class Brats, the Queers, Protex, Go betty Go, Murphy’s Law, Peter and the Test Tube Babies, Shonen Knife and the Freeze! This is only the beginning…

Last False Hope are some city slickers from the mid-western suburbs of Chicago. Their unique sound of underground bluegrass imbibed with their roots in punk and metal is a loose bull in a china shop. This clash of genres that they have dubbed “Brutal-Grass” has quickly earned them a name in the scene. The band was cooked up by Jahshie P. A long time veteran in the Chicago music scene, best known as the former frontman of Failed Resistance, My Vengeance and later, Neverland. In the past few years, Jahshie P. developed an intense interest in country western and blue grass music, along with his new found passion of the mandolin. Come the Summer of 2009, his new skills began to translate into songs. His first step was to bring his wife, Kristina Nutting, a new comer to the Chicago music scene, along for the ride. She would rapidly warm up to the banjo. Quick to the draw, they set forth to include a track to the Outlaw Radio Compilation, volume one. To fill in the blanks, they recruited Producer, Shawn Connors, best known as the drummer of death metal band, Bound And Gagged and later, Jashie P.’s band mate in Neverland, as well as a number of other fly-by-night acts. To fill in the line-up, Arcadia Kust on fiddle, Sean Moriarty on guitar and Dave Beneventi on bass from a local irish punk act, The Fisticuffs, as well as former My Vengeance members, Steve Stepien on drums and David Wiegers, who also played guitar in Neverland. This line-up would go on to record “Two Dollar Pints” for the comp. Over the course of roughly the next year, the seven of them would go on to write more songs and play several shows Come September 2010, they re-enlisted Shawn Connors to begin work on the debut EP, “The Shape Of Blue Grass To Come.” Four songs, “Giving Up God For Lent,” “Drag Me To Hell,” “You Drink, You Drive, She Wins” and “Dying and Diseaed” would make the final cut. The EP was released on March 1st through Pint Of Happiness Records. After the conclusion of the “The Shape of Blue Grass To Come” sessions, Sean, Arcadia and Dave B parted ways with the band. Shawn Connors has since joined to fill the open guitar position, along with Scott Farruggia, also from Bound And Gagged and Neverland on bass and friend of friend, Colleen Mary on fiddle. The new line-up was debuted on a track for the Southern Independent, volume one compilation, titled “Guilty Until Proven Innocent.” They new line-up is currently working on a versus split with Nellie Wilson & the Hellbound Honeys on Jahshie P.’s own, Solitary Records. Since their their inception, l/f/h has shared the stage with the likes of Star Fucking Hipster, Those Poor Bastards, .357 String Band, Hellbound Glory, The Goddamn Gallows, Rachel Brooks and Six Gun Britt. They were also, named the Best Country Bandin the Chicago Reader “Best of Chicago 2011” reader’s poll. They will continue to play shows with the line-up in support of “The Shape Of Bluegrass To Come, while crafting new material for a debut full length, hopefully to be released in early 2012.