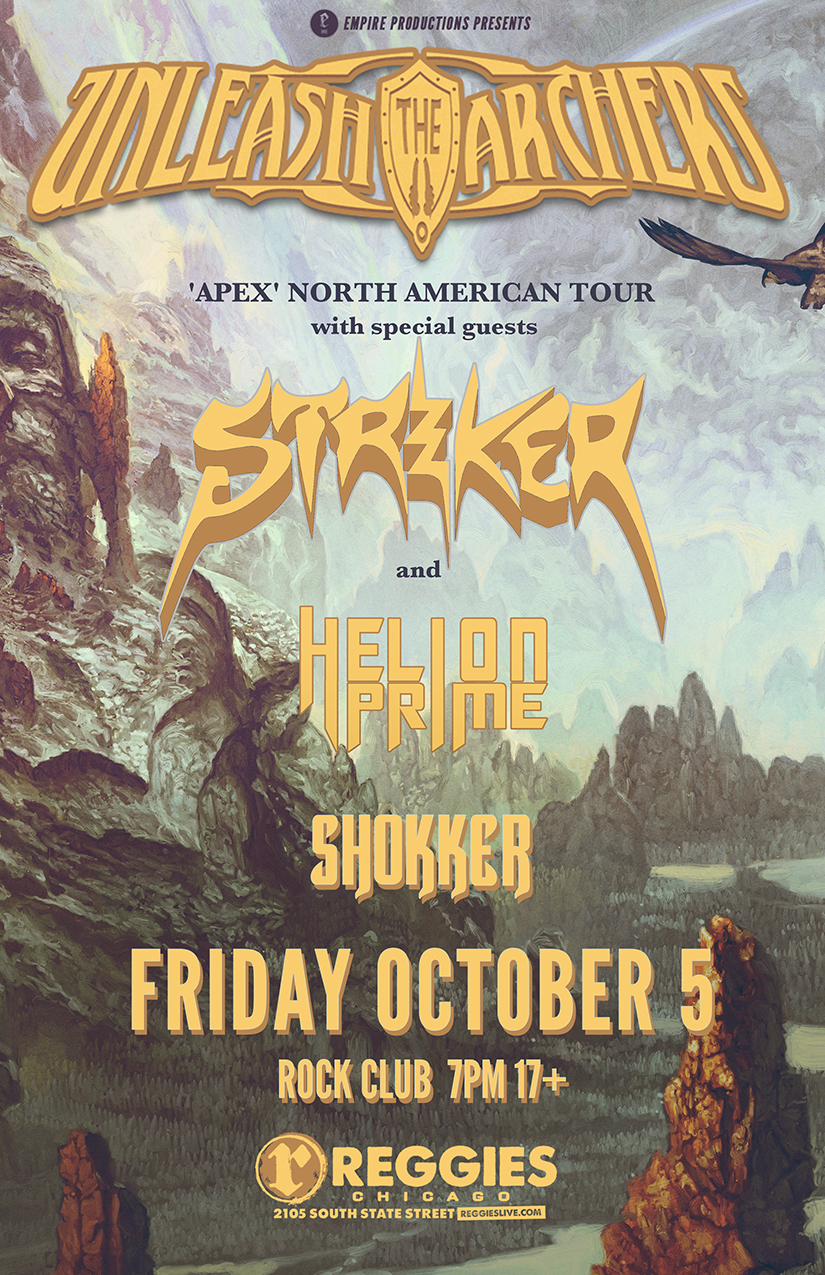 Legend tells of an Immortal, asleep in a mountain keep
Whosoever shall awaken, his endless power reap
Shackled by a curse at birth, over which he’s no control
Forced to serve as hand of evil, lost without a soul
The Matriarch, she has him now, firm within her grasp
A ritual to cleanse the bloodlines, immortality at last
Find her sons and bring them to her, on altars they will bleed
Complete the task and as she promised, finally be free

“Full Speed or No Speed”: prophetic words to live by from Striker’s debut full length release “Eyes in the Night”. Since forming nearly 8 years ago, not a day goes by without the pedal to the metal attitude that smashes through the traffic jam of modern metal. “Stand in the Fire”, Striker’s 4th studio album, prepares to shift the band into high gear and leave the competition in the dust. Guest performances from some of metal’s premiere players as well as other unprecedented collaborations prepare a high octane mix that is ready for ignition. This will be Striker’s strongest album to date, living a life set by one rule: no limits!
Striker has come a long with since their 2007 formation in Edmonton, Alberta, Canada. The band’s first demo immediately caught international attention from notable German record label, Iron Kodex. Backed by the label’s support, Striker went on to record and release their first EP, “Road Warrior”, in early 2009. The EP spread like wildfire among metal fans in Canada, Germany, and Spain. It was this first major stepping-stone in kick starting a promising career.

In 2010 the band released their first full-length recording, “Eyes in the Night”, which reinforced Striker’s presence in both the domestic and international metal scene. The release initiated the band’s touring career: including Canada coast to coast, and over a dozen European countries with several festival appearances (Metal Assault Festival, and Headbangers Open Air) overseas. This established the credibility of Striker as a hardworking, dedicated band, willing to take the risks necessary to make it to the next level of their musical career.

Over the years Striker continued to refine their public image, hone their product, and solicit support within the music industry. Having completed the Iron Kodex contract with Eyes in the Night, the band looked towards greater achievements and began working with producer Michael Wagener (Ozzy Osbourne, Metallica, Skid Row) in Nashville, Tennessee. After spending over two months recording in the USA the band completed their 2nd album, “Armed to the Teeth”, and was promptly signed by prominent Austrian label Napalm Records July 27, 2012.

Hot off the heels of the album release announcement, Striker was selected to directly support heavy metal giants Metallica for 2 sold out shows at Rexall Place in Edmonton. The shows were a huge boost to the band and showed them the inner workings of one of the most successful bands in history. With a newfound work ethic, the band set to work planning their biggest Canadian and European tours to date, breaking into new territories such as the UK and Japan. With the desire to improve and expand to even greater heights, the band remained in Europe after a headlining tour and began to work on the album “City of Gold” with visionary producer Frederik Nordstrom, a founding member of the melodic death metal sound.

“City of Gold” was critically acclaimed and propelled Striker forward in the industry, directly supporting veteran acts such as Bullet and Artillery on extensive tours of Europe and the United States. Major European festivals began to take interest, with the band headlining smaller festivals such as Devilstone Festival and Headbangers Open Air, and headlining the second stage at major festivals such as Metal Days Festival to enormous crowds. Working again with Frederik Nordstrom, “Stand in the Fire” sees Striker taking their destiny into their own hands by releasing the album on their own label “Record Breaking Records”, ushering in a new era of decisive action, dedication and forward thinking. Live life by one rule: No Limits!

Helion Prime was first conceived from a common love of metal and all things science. The band was founded when Jason Ashcraft (of Dire Peril) asked Heather Michele (of Graveshadow) to form a project with him. Between the two, they had worked with such artists as Mark Briody (Jag Panzer), Brittney Slayes (Unleash the Archers), Andy LaRocque (King Diamond), Ralph Scheepers (Primal Fear), Arjen Anthony Lucassen (Ayreon/Star One), and Niklas Isfeldt (Dream Evil). The concept; power metal with themes based on actual scientific theories with the occasional sci-fi tribute. The name Helion Prime was borrowed from an alien planet featured in the film “Chronicles of Riddick,” a movie the two were great fans of. She accepted the exciting proposition without hesitation. The two recorded their first demo track in June of 2014, and with the help of members from Dire Peril and Axiom, Helion Prime debuted their first live performance in August 2014 at the Boardwalk in Orangevale, CA. The dynamic duo then released their first EP on February 26th, 2015 with a full length album in the works. Helion Prime’s lineup was completed after bringing Jeremy Steinhouse on bass and Justin Herzer (of Axiom) on drums. In August of 2015, Helion Prime set out on their first tour, playing shows in Oregon, Nevada, California, and Utah. Their debut album is set to be released in early 2016 and will be featuring special guest Niklas Isfeldt of Dream Evil. Stay tuned all you power metal fanatics!

Hailing from Chicago, Shokker has become one of the most formative and enthralling live acts in recent years, having shared the stage with the likes of Queensryche, Saxon, Y&T, Warrant, Manilla Road, Diamond Rexx, Unleash the Archers, and Striker. With twin guitarists Casey Termont and George Sizos, Jorey Guillermo on bass, Dan Dash on drums, and David Kraus on vocals, the band is a force to be reckoned with.