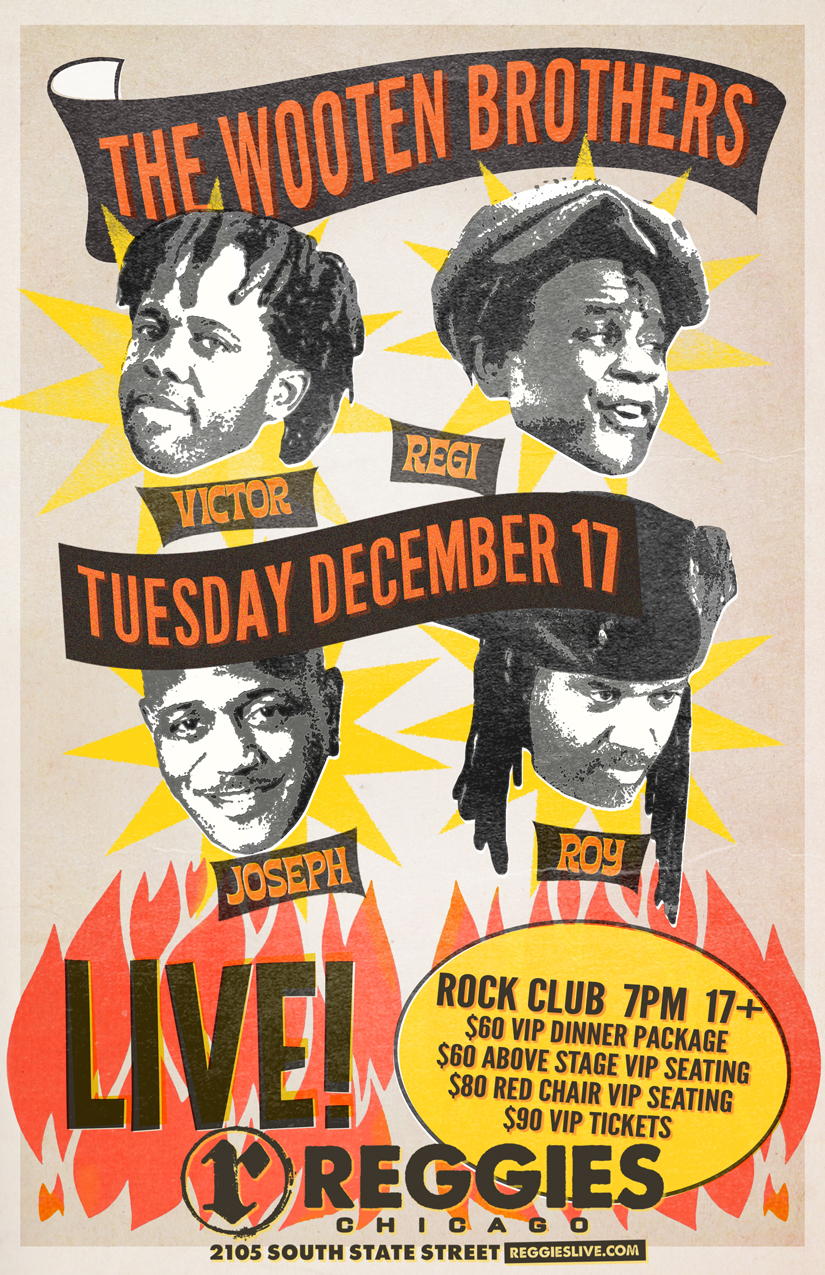 For over four decades the Wooten Brothers have been recognized as some of the most innovative musicians in existence and are collectively known as one of the most talented and dynamic band of brothers the world has ever known. Since they were young, the five brothers have been a musical tour-de-force redefining the limits of jazz, funk, soul, R&B, rock, and bluegrass. Sons of military parents, their early years were spent living in different states including Hawaii, California, and Virginia where they shared stages with the likes of Curtis Mayfield, The Temptations, Ramsey Lewis, Stephanie Mills, War, and other artists. In the mid 80’s, the brothers released an album as The Wootens for Clive Davis’ Arista Records. This will be the brother’s first tour together as a band since the untimely death of their saxophone-playing brother Rudy a few years ago.

Victor Wooten, a five-time Grammy Award-winning artist, has graced the cover of Bass Player Magazine five times. He is a founding member of the eclectic group Bela Fleck and the Flecktones and is recognized as one of the greatest living bassist today often drawing comparisons to Jaco Pastorius, and was named one of the “Top ten bassist of all time”by Rolling Stone Magazine. He is also an award-nominated author, naturalist, and music educator and has been running his unique music/nature camps since the year 2000. Wooten’s camps are held at his own Wooten Woods, which is just outside of Nashville. In 2010, he started his own record label, Vix Records, which has released a series of acclaimed recordings over the last few years.

Joseph Wooten has a dizzying list of talents that is impressive even by the Wooten clan’s standards. Currently the keyboardist for the Steve Miller Band (since 1993), he is also a composer, orchestrator, motivational speaker, and has been showcased as an amazing vocalist since he was a child. In 1981, Joseph became known as the “overnight accordion player” when he literally auditioned, bought an accordion, and began performing within a matter of a few days for the Busch Gardens amusement park in Williamsburg, VA. He has collaborated with the likes of Whitney Houston and Kenny G, and when not touring with Miller, leads his own band, performs with Freedom Sings, and even helps out his little brother as keyboardist, vocalist, and composer for The Victor Wooten Band.

Roy “Futureman” Wooten, also a five-time Grammy Award winner, is best known for his masterful drumming and percussion skills and is a founding member Bela Fleck and the Flecktones. Roy, a seasoned drum set player, is mostly known for his frenzied, inimitable on-stage performances heightened by his surreal choice of instruments: his trademark inventions “The Drumitar” and “RoyEl” keyboard. He is also a philosopher, researcher, filmmaker, and educator. His impressive solo career and “Black Mozart” projects scan the genres of classical, jazz, soul, gospel, and spoken word.

Regi Wooten’s signature guitar style of chording, slapping, tapping and frenzied strumming has earned him world-wide notoriety and comparisons to Jimi Hendrix, Frank Zappa and Chuck Berry. In recent years, Regi has performed with many artists including the legendary Ginger Baker. Regi, known worldwide as “The Teacher”, currently teaches music in Nashville, TN and has taught many notable musicians.   He was teaching his little brothers Joseph and Victor when he himself was only 9 years old.  One of his early, but lasting contributions was the composition of his and his brother’s high school Alma Mater.

Together The Wooten Brothers bring an uncanny level of experience, originality, and musical expertise to the stage. Their shows will be a high-energy, super-funky, artistic blend of styles including original songs and classics. In short: these brothers are the real deal and their shows are not to be missed.

A guitar duo that not only celebrate the tradition of guitar performance of the old and the current rapport but also as composers they are a part of a movement in the states who’s aim is to build the new repertoire for the next generation of guitar players.
Steel string ten finger tapping guitar prodigy Andreas Kapsalis, and nylon string classical guitarist Goran Ivanovic have fused their musical roots with modern, classical, world, jazz and beyond in this experimental duo. As they continue to create “buzz” throughout global music circles, these masterful musicians are also creating genres & musical styles that have yet to be named.

includes early entry, poster and access to above stage balcony