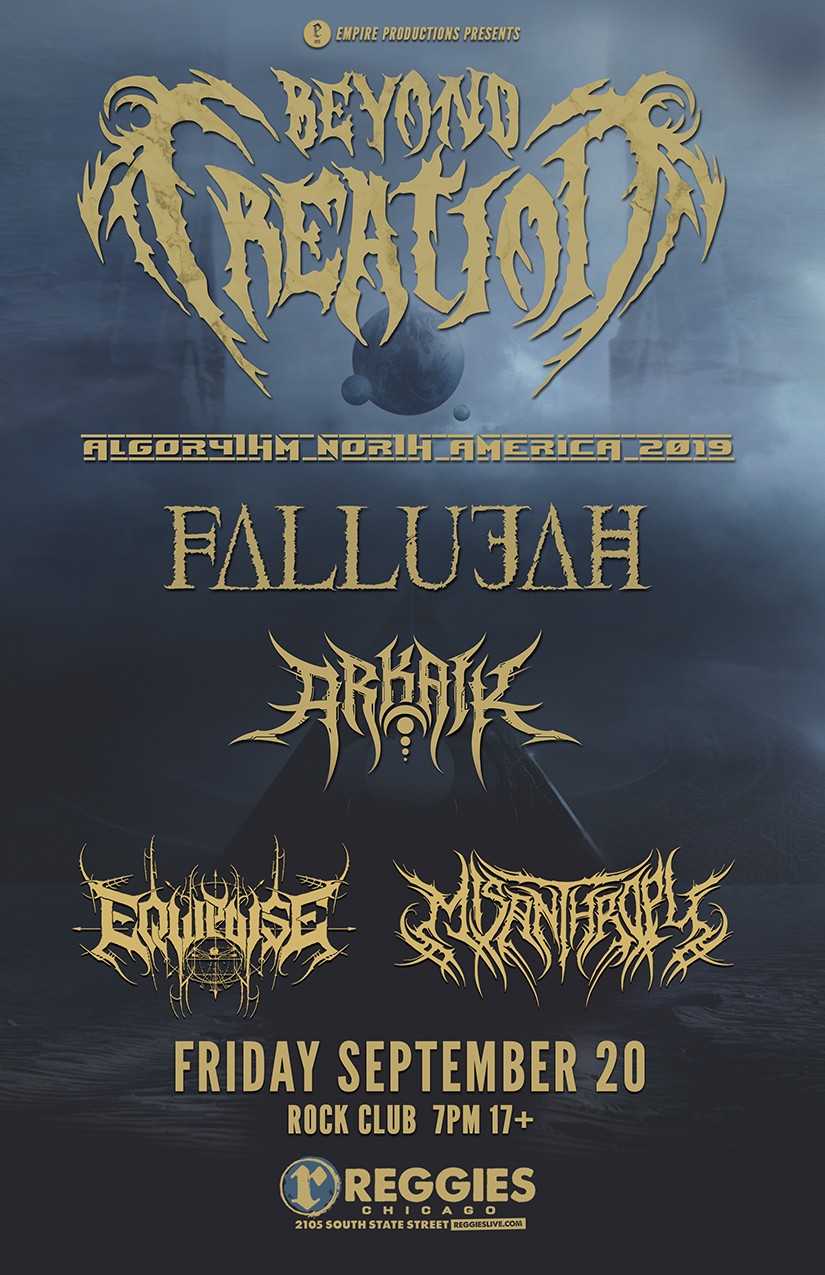 Since the release of their debut full-length album, The Aura, in June 2011, Montreal progressive death metallers Beyond Creation have become known for taking the innovative and exciting metal sound of their Quebec homeland and launching it into uncharted territory. Guitarists Simon Girard and Kevin Charté blend top-notch technical death metal playing, at times reminiscent of Gorod and The Faceless, with uid and progressive slides and taps, inspired by everything from
Guthrie Govan to Animals As Leaders. They are joined by arguably one of the most
forward-thinking players in metal, Dominic ‘Forest’ Lapointe, on six-string fretless bass, known for his work with Augury, Quo Vadis, Teramobil, Atheretic and others. Backed by the relentless assault of hyperactive drummer Philippe Boucher (Other bands: Incandescence, First Fragment, Chthe’ilist, Décombres) and led by Girard’s blend of guttural growls and inhaled/pitched screams, Beyond Creation are blazing their own trail through hard work, originality and a fresh perspective on the metal genre.

“The songs on »Undying Light« are raw, confident, and new,” says guitarist/primary songwriter Scott Carstairs. “I think the last couple of albums we spent a lot of time experimenting with different elements, such as clean guest vocals, synthesizers, or different kinds of instrumentals. This time around we knew from the get-go that we wanted this record to be raw and honest. We wanted to move the music further but still showcase the sound and emotions this band has always evoked. With the addition of Antonio, we have been able to take the sound to new levels of emotion, a sound we have been striving to achieve for years but couldn’t quite get to until now.”

Arkaik’s debut album, “Reflections Within Dissonance”, displayed a unique marriage of superior craftsmanship and a forward-thinking promise rarely seen in a band this young. Their sophomore album, “Metamorphignition” builds on their progressive and adventurous predilections and aims to transcend the boundaries of “technical Death Metal” even as it revels in the sub-genre’s wanton brutality. The band’s founder Jared Christianson (vocals) has pooled an immensely talented core of musicians around the band in its over ten years of progression, including emerging drum phenom Alex Bent (who has already done session work for Decrepit Birth/Rings Of Saturn/Battlecross), bassist Ivan Mungia (Deeds of Flesh), and lead/rhythm guitarists Miguel Esparza and Greg Paulson. Having already toured North America supporting Black Dahlia Murder in 2011, and Cannibal Corpse in 2012, they have been touring ever since creating their own enthusiastic fanbase and pushing the genre forward. Now Arkaik has released another crushing onslaught in the form of their newest full-length release “Lucid Dawn” in late 2015, their third Unique Leader Record release to date. Looking forward with ever increasing determination the band continues to seek out new boundaries of extremity and creativity – and then annihilate them.

Equipoise was founded in August of 2015 by Nick Padovani as a result of he and Zach Hohn writing riffs in the summer. Nick began transcribing these riffs into Guitar Pro in August, which is where he began to start adding instruments and ultimately complete songs. After a few months of playing around with ideas, Nick had written up a full album’s worth of material.

Nick presented this material to Stevie Boiser and Hugo Karout, who obviously agreed to join, and Equipoise soon became a reality. Jimmy Pitts also joined the ranks of Equipoise in late June of 2016. We also joined The Artisan Era in late July.

Our EP, Birthing Homunculi is out now!

“Staying away from the traditional constraints of a single genre label, Misanthropy fuses mind dissolving dissonant melodies, twisting hyper speed technicality, foundation-shattering low brutality, and hooks that will worm their way into your brain and take up permanent residence “