The concert featuring Sloppy Seconds is POSTPONED. New concert date TBA. Previously purchased tickets will be honored at the door on the new date. If you are no longer able to attend, refunds are available at original point of purchase upon request. 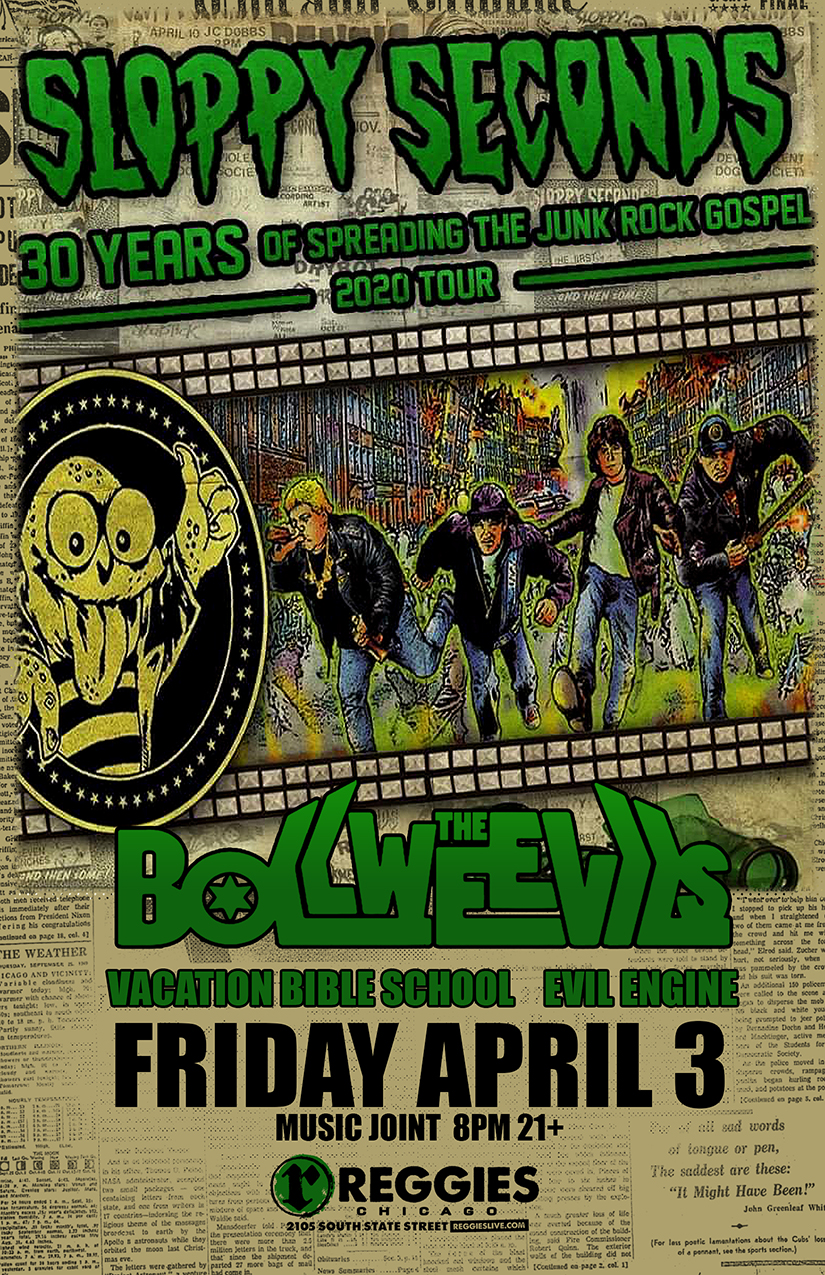 Sloppy Seconds is a Ramones/Dickies-influenced punk band from Indianapolis that started in the mid-1980s. With such underground hits as “Come Back, Traci” (a tribute to an underaged Traci Lords), “I Want ’em Dead”, and “So Fucked up”, the band prefers to sing about such topics as pornography, classic horror movies, old TV shows, comic books, alcohol, being fat, and getting drunk. They have been quoted as being proud to be fat, drunk, and stupid. Their name is the slang term for when a man has intercourse with another person who already has received another man’s semen in the relevant orifice.

Led by the sneering vocals of lead singer Daryl, The Bollweevils are direct inheritors of a Chicago hardcore tradition handed down from acts such as Naked Raygun and The Effigies.

Undisputed as one the finest Chicago punk outfits during the 1990s, The Bollweevils were, and still are, defined by their spirited live performances and a song catalogue that demonstrates both their roots and creative ability as a band.

Don’t be a part of it; stand up and always question. And if you don’t, then you’re becoming the fuel for the evil engine…”

Used as a metaphor for pop culture’s vapid stranglehold on society, it is the evil engine that powers modern ideals and standards; Evil Engine is the resistance against such complacency with punk rock energy, heavy metal groove and aggressive female vocals, with unapologetically honest lyrics zeroing in on issues such as social responsibility, societal blight and the validity of theism, among other concerns of the human condition.

Evil Engine is an amalgam of punk rock and heavy metal artists with over 50 combined years of musicianship.

Kryssie Crisis (aka Kryssie Ridolfi) of DEADMANSWAKE have teamed up with Mike Skull (of live performances with 45 Grave) Jamie Booth (formerly of Indolent) and Colin Holmes (The Massacres, Crusader) to bring you a myriad of punk, reminiscent of the early California “skate punk” sound; from the “Suffer” era of Bad Religion to more contemporary first wave and Oi! bands in the likes of Cocksparrer, Slaughter and the Dogs and Stiff Little Fingers, with aggressive nods to the metal edge of Motörhead and Anthrax.