Since Goose Island started serving beers to Chicagoans in Nineteen Eighty-Eight, we’ve drank, danced, and sang along at the small, independent venues that have built our city’s music scene. Without these clubs, Chicago simply wouldn’t be Chicago. These places bring us together. They drive our city’s culture forward. And yet these independent venues were the first to close and will be the last to re-open, if they make it through. In honor of all these wonderful clubs we will be releasing a limited edition beer called CIVL Pale Ale. This easy drinking American pale ale will not only support CIVL, but it will continue to raise awareness.  Goose Island’s love for live music will forever persist, no matter the circumstance.

We’ll keep doing our part, providing the beer and championing live music, and we hope you can do your part by supporting local music and all of the venues in the Chicago Independent Venue League.

The beer will officially be available on Wednesday July 8th in the Goose Island taproom. 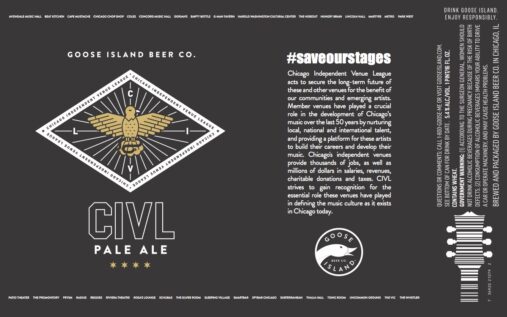