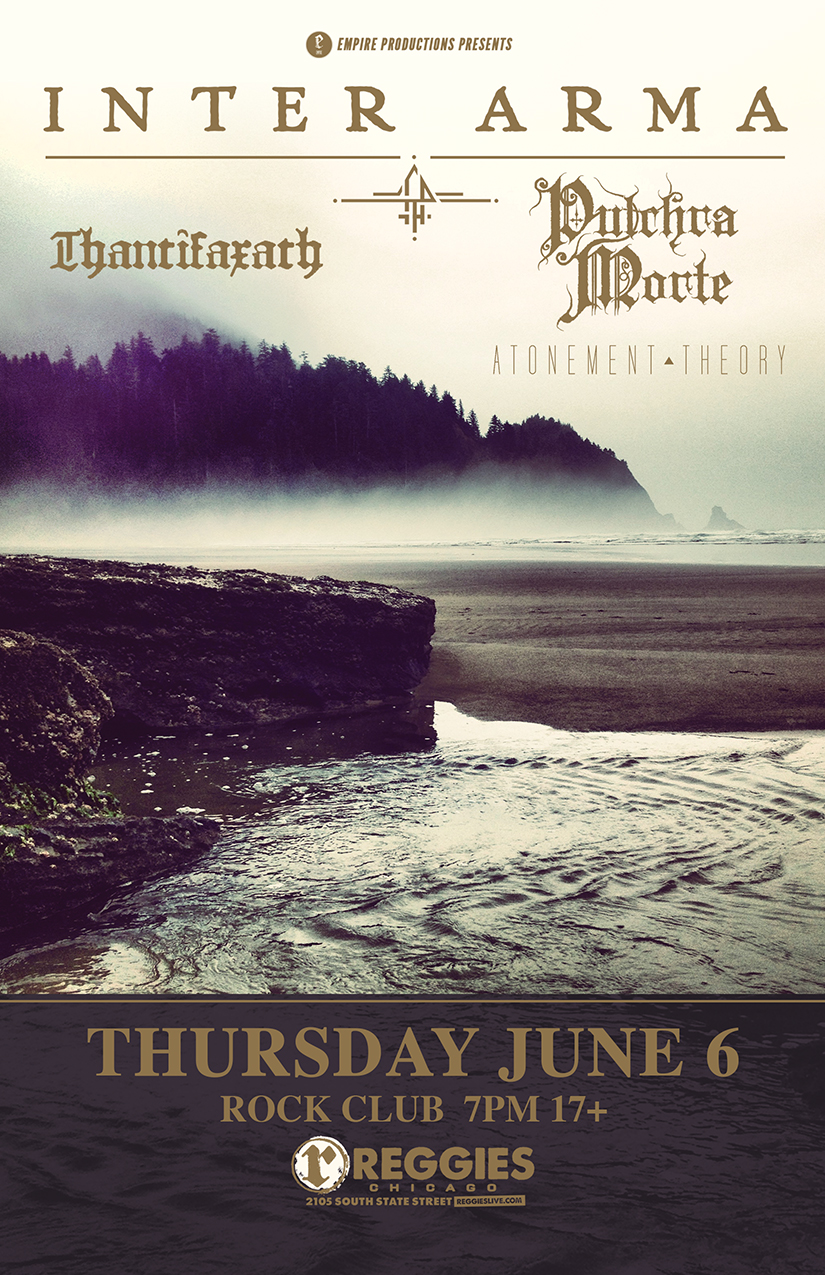 INTER ARMA‘s music resists generalization and categorization, but if there’s one thing that’s consistently true, it’s that the VA quintet possesses an unparalleled sense of scope. Few artists today accurately convey the complexity that INTER ARMA (Latin for “in times of war”) does – the band creates terrible and often hauntingly beautiful portraits of humanity through music that is deeply organic yet still mystical and modern. INTER ARMA are just as committed to the live circuit as they are to their records: the band has performed extensively throughout Europe and the US, sharing the stage with the likes of Kylesa, Baroness, Cough, Royal Thunder, Black Tusk, Ulcerate, Russian Circles, Windhand, and dozens of others. INTER ARMA‘s raw, uninhibited approach merges doom metal, psychedelic sludge, black metal, prog and more, and over the course of the last ten years, has established the band as a uniquely innovative force in contemporary extreme metal.

Founded in Richmond in 2006, the versatile and genre-defying five-piece released their debut full-length Sundown via Forcefield Records in 2010, and like all great artists, had a well-defined sound right from the start. Sundown found INTER ARMA widespread critical acclaim, and, combined with the band’s relentless touring schedule and DIY grit, quickly helped INTER ARMA make a name for themselves in the underground. Following Sundown, the band released the 12″ EP Destroyer via Toxic Assets Records. That record was strong enough to catch the attention of Relapse Records, who signed INTER ARMA later in 2012, and in 2013, the band unleashed the monolithic Sky Burial, a doomy, hour-long excursion through unpredictable textures and timbres. Just two years later, the band followed Sky Burial with The Cavern, a 45+ minute, single-song EP. Originally written during the summer of 2009, then slowly reworked and perfected, The Cavern was recorded in 2013 during breaks from the band’s non-stop tours. Both The Cavern and Sky Burial were widely hailed as some of the best records of their respective years and garnered INTER ARMA accolades from the likes of Pitchfork, NPR, Rolling Stone, and many other publications worldwide.

Two years after The Cavern, INTER ARMA are poised to return with their heaviest and most multifaceted work to date. Paradise Gallows is more than an hour of lush, colorful melodies and textures blended with the heaviness of the earth’s impending death. Like the band’s previous works, the new album Paradise Gallows is direct and foreboding while maintaining a nuanced, artful perspective. INTER ARMA‘s signature palette of dissonant high-end and abyssal low-end has been augmented with swathes of thick, impressionistic melody that lend Paradise Gallows a truly biblical sense of scale, both lyrically and in terms of the album’s sonic content. Harsh and acoustic passages (including the band’s first-ever foray into clean vocals) spar with complex rhythmic structures across nine sweeping tracks of expansive, progressive heaviness. The album was again recorded with Mikey Allred (Yautja, Hivelords) at Dark Art Audio in Nashville, and features gorgeous cover art by Orion Landau. Dense, funereal, and richly evocative, Paradise Gallows is a rich blend of doom, post-metal, sludge, and black and death metal, and is a singular and powerful new addition to the band’s already monumental discography.

Thantifaxath is a Canadian black metal band based in Toronto, Ontario. The band, which is signed to Dark Descent Records, consists of three anonymous members.

The band released their self-titled EP in 2011. The band’s debut album, Sacred White Noise, was released on April 15, 2014 via Dark Descent Records. The band premiered the album’s opening track, “The Bright White Nothing at the End of the Tunnel” via Soundcloud in February 2014, which gained attention from art and music websites such as Vice, BrooklynVegan and Sputnikmusic. The track “Where I End & the Hemlock Begins” was also released on Soundcloud.

In 2014, the band started touring with New York-based black metal band Castevet in North America. Despite touring, the band maintains its anonymity.

The band’s music has been described as “a batch of incendiary, discordant and blistering black metal.”On the band’s debut album, Doug Moore of Invisible Oranges wrote: “Sacred White Noise is both artsy and rooted in black metal, it’s pristinely performed, beautifully recorded, and far more expansive than any typical black metal album.” He also described it as “a thematically and harmonically frightening” record, while stating: “Progressive rock and outré noise run flanking maneuvers around the edges of a truly vicious frontal assault that borders on death metal in gravity.”

Band from the US playing in the style of early death/doom metal. Pronounced ‘pul.kʰra / ‘mɔr.te

I began my musical endeavors around the age of 16 playing in several Buffalo, NY based Straight Edge Hardcore bands before re-locating to Chicago Illinois where I joined the band Extinction.

I later went on to join Arma Angelus and have since been in several bands such as Stabbed By Words and Holy Roman Empire before taking a long needed brake from touring and playing in a steady band.

During that time, I began writing music and conceptualizing what I felt was music that perfectly embodied all of the elements I like best about music, as well as something that represented my emotions. Something that was heavy, dark and brooding, yet melodic.

I am also currently guitarist for Metal/Hardcore band Harm’s Way.