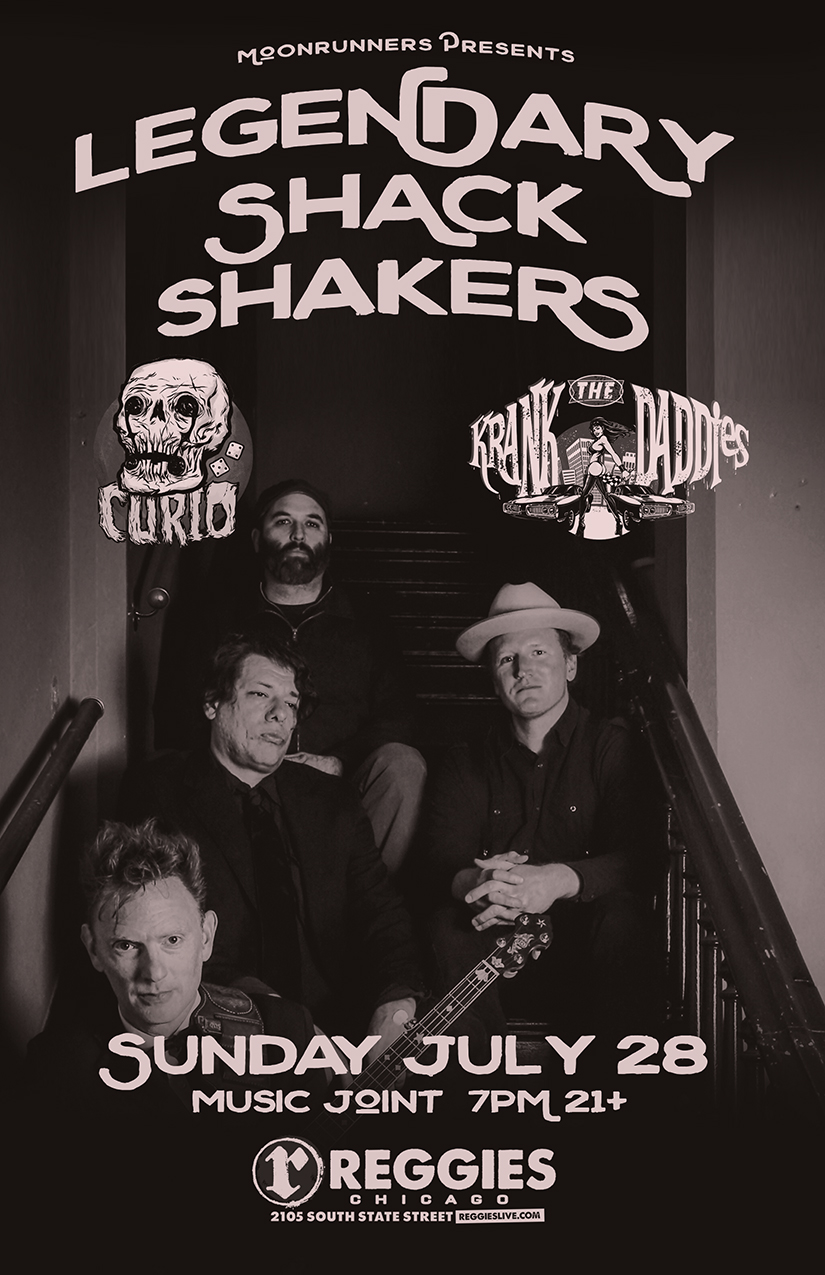 The Legendary Shack Shakers’ hell-for-leather roadshow has earned quite a name for itself with its unique brand of Southern Gothic and swampy “hillbilly blues” that is all-at-once irreverent, lyrical, dangerous, and fun. Led by their charismatic, rail-thin frontman and blues-harpist JD Wilkes, the Shack Shakers are a four-man wrecking crew from the South whose explosive interpretations of swamp blues, rock n’ roll and hillbilly music have made fans, critics and legions of potential converts into true believers.

Between intermittent hiatuses to work on other projects (including JD’s sideshow banner-style artwork for acts like The Squirrel Nut Zippers and Marty Stuart…plus his two published books The Vine That Ate the South and Barn Dances & Jamborees Across Kentucky), the band is constantly re-inventing and re-mobilizing, much to the excitement of many a Shack Shakers fanatic. Despite Wilkes’ extracurricular projects, the Shakers’ reputation for intense entertainment endures.

On stage, JD has been compared to the likes of Iggy Pop, David Byrne, and Jerry Lee Lewis. The Nashville Scene named Wilkes “the best frontman in Nashville”, while former Dead Kennedys frontman Jello Biafra has called JD “the last great Rock and Roll frontman.” Guitar virtuoso, Gary Siperko (Pere Ubu, Rocket from the Tombs) intones a variety of strains, from garage blues to gypsy jazz, while the rhythm section rounds out with Preston Corn (The Dirt Daubers) on percussion and Fuller Condon (Two Man Gentlemen Band) thumping the upright bass.

Although not necessarily “legendary” upon being named, the band has grown into its reputation the last several years due to their heavy tour schedule, seven critically acclaimed studio albums, and songs that have been featured on television shows such as HBO’s True Blood, CBS’s The Unit , Swamp Loggers, and movies like Julia Roberts’ Duplicity. Past tour mates and fans include Sturgill Simpson, Reverend Horton Heat, Rancid, The Black Keys, Slim Cessna’s Auto Club, and Hank Williams III. Robert Plant is also a noted Legendary Shack Shakers fan, and picked the band to open for him on his 2005 tour of Europe. Plant named the band’s third album Believe as one of his favorite records of 2005. The list of esteemed admirers goes on to include horror novelist Stephen King, who listed “CB Song” as among his iPod’s Top Five in a 2008 Entertainment Weekly article. Such a wealth of devoted, cult-like fans over the years has only added to the mystique that the Legendary Shack Shakers possess, carrying them down the road toward new creative pursuits and intense new tunes.

Here are the THE WORLD FAMOUS KRANK DADDIES, a Chicago based band always ready and willing to RIP IT UP!! After thousands of shows people have labeled The KrankDaddies music as Raw Rippin Rock n Roll. The KRANK DADDIES deliver a high impact live performance which always leaves the audience screaming for more. Fronted by Chops McClintock, a greasy gritty rock and roll legend, THE KRANK DADDIES rip through their live sets with a “Johnny Cash went to Hell and punched the devil in his balls” vibe. HiTops Farrelli hits the stage with his upright bass pounding out the rhythm like a Brooklyn Brawler. The Krank Daddies have toured the continental USA extensively and have shared the bill with some of the music industry’s most renowned rock artists such as Motorhead, The Reverend Horton Heat, Rob Zombie, Social Distortion and more. THE KRANK DADDIES Have independently released two albums and are currently securing a world renowned producer for their 3rd release. This band has received rave reviews and is on the cusp of conquering the world!

Curio is a hell-raisin’ and soul-shakin’ rock n’ roll band from Chicago, IL. Their music is steeped in southern gothic lore by way of the Midwest. Heavily influenced by the growl of Chicago blues, the low-down and dirty swamp rock of Louisiana and the twang of Tennessee country, Curio conjures a sound that has as many influences as there are miles on I-55 from The Windy City to The Big Easy. Chris Pluska and his band of wayward gamblers have been playing to crowds at juke joints, dives and clubs since 2009. Curio’s live show has the fervent energy of a backwoods revival and the no-holds-barred attitude of a bar brawl. Their records are love letters to the bastards, brawlers, vagabonds, and believers who’ve shaped American folklore for better or for worse. Curio’s tales have been described as ‘Midwest murder ballads’ that depict the timeless narrative of wrong-doing and temptation. Among their supporters from coast to coast can be counted Paducah, Kentucky’s own J.D. Wilkes of Legendary Shack Shakers/Dirt Daubers fame who worked with the band on 2014’s “Twisted Roots” album.

Chicago has historically been home to some of the most notorious cheats as well as tough-as-nails workin’ folk and Curio walks the line between the rogue waltz of Prohibition-era bootleggers and the brute tenacity of the old Union Stock Yards butchers. Like their name implies, Curio is a collection of oddities whose sound has been weathered over the years.