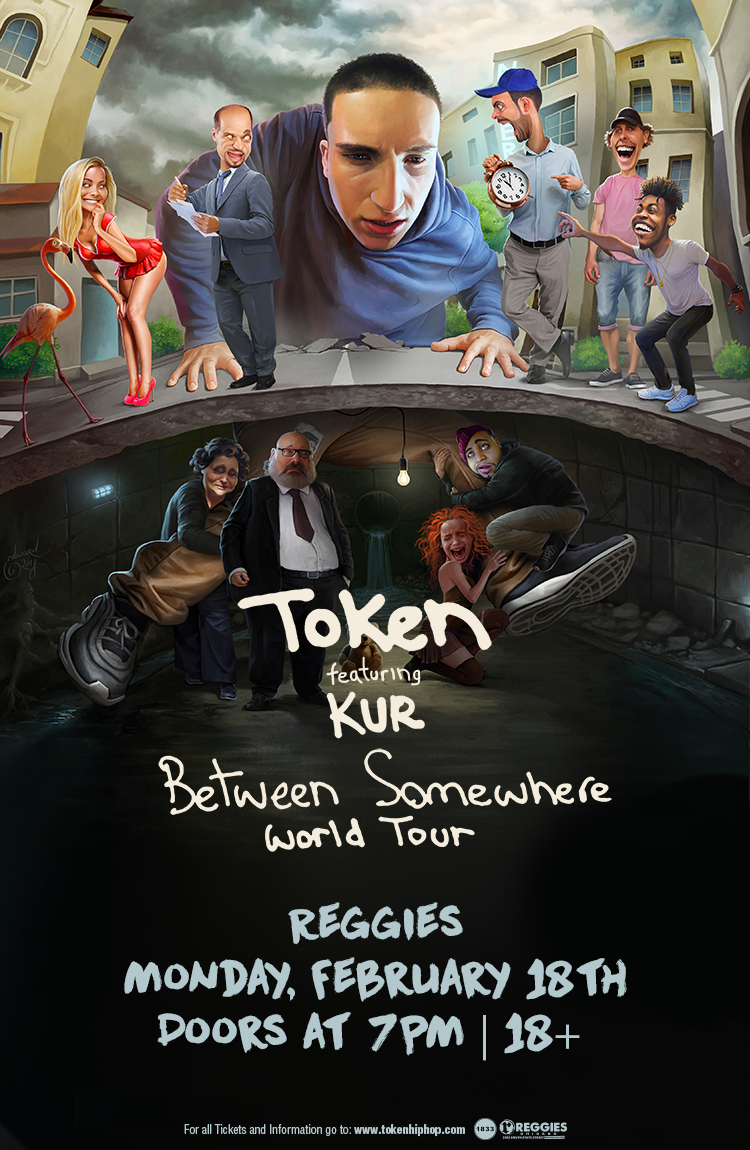 “I was sitting in my first period precalculus class. I checked my phone and thought I was seeing things. The video had gotten 7,000 views the night before and was up to 100K by the morning. I almost fell out of my chair.” Needless to say, precalc was a wrap for the day.

The video for “No Sucka MCs” earned 17-year-old wunderkind Token his first real burn on the rap blogs. Littered with timely, toothy, subliminal lyrics like “Until the XXL cover will set it up / I’m a junior now, I’ll f*** a freshman up,” the track catapulted Token from provincial problem to national nuisance. Originally submitted to an online rap competition –one of several Token ended up winning– the song has amassed 1.6 million views on YouTube. It was this track that prompted another Massachusetts native who’d gotten his start rhyming, superstar Mark Wahlberg, to take to Twitter and proclaim Token his new favorite rapper.
“No Sucka MCs” also prompted iconic hip-hop tastemaker Sway Calloway to invite Token to spit on his influential Sway in the Morning SiriusXM show. “I rehearsed day and night for Sway,” Token reveals. “I wanted it flawless. And I actually prepared about 11 minutes of material, roughly 250 bars. Then, literally the day before, I got the news that I would have about half that time. I had to chop 11 minutes down to like 6, basically overnight. It was nerve-wracking.” Sway’s cohost Tracy G actually broke down in tears with his verse—the video of which has garnered over a million views in a single 24-hour period, and totals more than 5 million views to date. The internet was set aflame by an apparent rap prodigy. A star was born.

Token’s trajectory is unorthodox bordering on inexplicable: “When I was young, doctors and analysts literally told me I can’t put words together like normal people do,” recounts the rapper, real name Ben Goldberg. “That my brain doesn’t have the ability to process language and understand long words. Of course, this is so ironic because this is what I do—how I choose to spend my time.” Token was put into special ed classes and diagnosed with depression, anxiety, and a learning disability.

These outward pivots belied Token’s true nature: “I always felt very different from everyone, always felt disconnected,” he admits. “I was such a thinker as far back as the first grade. I was embarrassed by a lot of what I was feeling and didn’t think people would take me seriously at that age. So I started a diary, like poetry conveying the way I was feeling. I would hide the pad under my bed. It became something I relied on—something I’d look forward to doing.”

Fast forward to the present, and it’s scores of fans who look forward to Token’s writing. The naysaying therapists have been replaced by reams of positive YouTube comments. But don’t get it twisted: despite his pedigree in online cyphers, Token makes it clear he’s built for the flesh: “I’m not just this internet guy. I take time to make sure my live show is dope. I’ve grown a lot and I encourage people to come to my shows to take me in. You don’t know who or what Token is until you see me live.”

Take him in, fans have. In April 2016, he made a run through France, including a performance at the heralded Chorus Festival, alongside rap icons The Pharcyde and current soul/funk phenom Robert Glasper. He returned to the States as the video dropped for his collab with Slaughterhouse flamespitter Joell Ortiz, “Kill at Will.” “This is someone I grew up listening to,” Token reveals. “I have his whole discography. I was listening to him every day, so when he reached out to me, I couldn’t believe it.” Indeed, “Kill at Will” slotted in as the lead single off Joell’s most recent project, That’s Hip-Hop. Meanwhile, kudos and cosigns kept rolling in: from D12, from Fred Durst, from Flo Rida, from fellow MA musician Clinton Sparks. Somewhere along the way, Token attended his junior prom, too.

This seems the stuff of fantasy, not high school yearbook. But Token learned in grade school to be the architect of his own fate. So what seems unattainable to outsiders is simply Ben Goldberg’s fuel: “I hated the way I looked. I went to the doctor and he warned me I was destined for diabetes—just like my dad, and his dad, and his dad before him. So I snuck into the local gym to start exercising; as kind of a big kid, I could get away with it. I lost 50 pounds going into 5th grade. I realized I am blessed with dedication. If I put my mind to something, if I can visualize an end goal, then it’s something I can make happen. So I took the same approach with rap: Every day after school, I would come home, do my homework, then write and record. Every single day. The same is true now. I look at each day as a schedule, as part of a larger plan.”

Token’s hours are now filled with putting the finishing touches on his first full-length project, a forthcoming mixtape: equal parts verbal acrobatics, clever conceptual records, and emotional childhood revelation—the first of which is “Necessary Evil,” courtesy of renowned VA producer Nottz. A boisterous mix of kick and bass, accented by insistent horn lines, serves as Token’s vocal canvas. Look also for “Waist Down,” an irrepressible, high-energy anthem that’s both tongue-twisting and tongue in cheek. Token is likewise sorting out a tour in support of the project.

At only 17, Token is already many things to many people. What’s singular is his drive: “I have a lofty goal; I want to make a living off my passion. Music is what helped me get confidence. Music is my time to be invincible. Even though I’m young, my childhood already feels like a different life, because I’m looking back and writing on it. I’m in love with writing and I’m not going to pigeonhole myself.”

Philadelphia has come to be known as the “land of the spitters,” where rappers from all walks of life are competing to be the very best the city has to offer. For Kur (pronounced “Core”), his rendition of Drake’s “Pound Cake” featured a list of past relationships and experiences with women in Philly. On the remakes, he held nothing back, addressing a lot of them by name and started to network within rappers and promoters. People instantly started noticing his true potential.

In May 2015, Kur dropped How It Never Was that featured his anthem “I’m a Star,” which caught the ear of Timbaland who initially wanted to help push the record. To top off the year, he released another mixtape, Finally Happened showing his unbeatable work ethic. “The house I was raised in turned into a trap house” is just one of many written truths. The realness of “Have Nots” got him a response from G.O.O.D. Music president Pusha T who shared on Twitter: “Your truth is your greatness.”

Backed by multiple top musicians in the industry and a loyal fan base, Kur’s profile increased value when he signed with independent label eOne in August of 2016. Kur collaborated with Harlem’s own Dave East to piece together an EP called Born Broke, Die Rich that was recorded and released in the span of two days. On the horizon is a re-release of “I’m a Star” with added verses, as well as an appearance in one of the cyphers for the 2016 BET Hip Hop Awards that aired on Oct. 4. While constantly releasing new music, and getting great feedback; he’s already being called a ‘beast in the studio’.

“This tape, I wanna really rap,” he says. “That’s why I put the record ‘Have Nots’ out just to let people know who I really do it for. I feel like there’s more people that’s broke than rich. I really don’t make music for rich people. I really make it for people on the come up.”